Avalanches in Germany and Austria have left at least two dead. Some 70 rescue workers combed the area looking for survivors until the search was called off at nightfall. 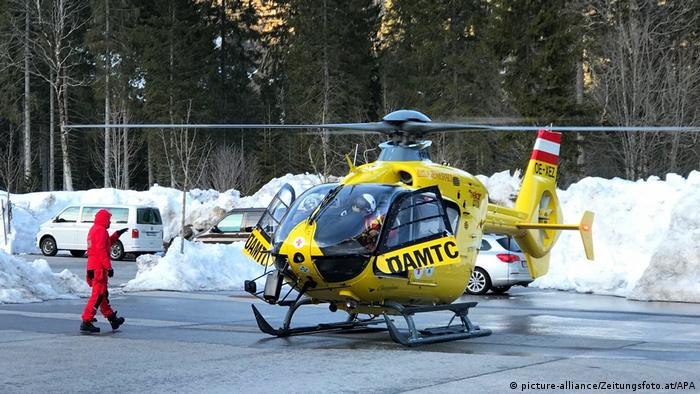 At least five skiers were struck by three avalanches in the Ammergauer Alps near the German-Austrian border, police in Germany's Ostallgäu district said Saturday.

Rescue crews found one person, a German, dead under the snowpack. Four others were rescued and one person is believed to still be missing.

The joint German and Austrian police operation had to be called off late Saturday due to "too much danger for rescue workers in avalanche prone areas in the dark," police said.

Due to the inaccessibility of the area rescue crews had to be flown in by helicopters.

Another avalanche in Austria's Kühtai on Saturday killed a 27-year-old ice climber who was pushed 50 meters (164 feet) by the wave of snow. His climbing partner alerted mountain rescue authorities, who were only able to locate the man after he had died. Austrian police said neither of the climbers carried avalanche safety equipment.

Swiss rescue teams have stopped a search for people after an avalanche killed one and injured three others. It was a rare avalanche onto a busy piste. (20.02.2019)

Police in France say at least four people have died in an avalanche in the southern Alps near the border with Italy. A rescue operation is underway for another person believed to be missing. (02.03.2018)