A virtuoso display from the Belgian midfielder gave the Bundesliga side the upper hand in its Europa League first leg against Inter Milan. The Italians managed an away goal but Wolves scored three of their own. 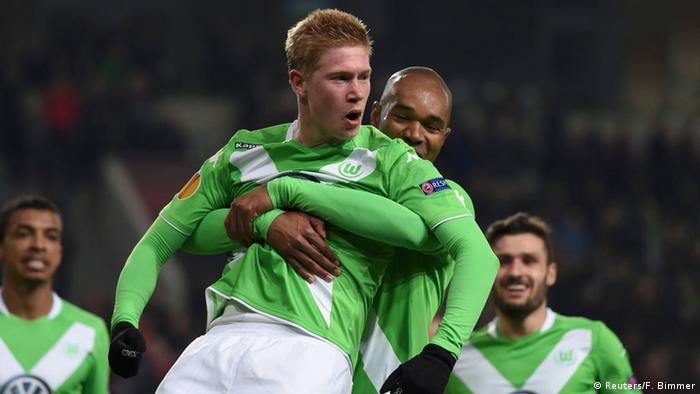 Kevin de Bruyne created one and scored two as Wolfsburg opened up a commanding lead in their Europa League Round of 16, first leg match against Inter Milan on Thursday.

Under-pressure Inter boss Roberto Mancini opted for a three-pronged attack and saw his side initially take the game to Wolfsburg, with Rodrigo Palacio opening the scoring. The home side forced their way back into the match however through Naldo, before a second half brace from De Bruyne.

Aside from a second half booking collected by Naldo - which rules the Brazilian out of the second leg - the only concern for Wolves remains the form of Andre Schürrle.

Wolfsburg general manager Klaus Allofs had publically backed the misfiring forward before the game but it was a mistake from the club record signing that led to Inter's goal on five minutes.

Tracking back deep inside his own half, Schürrle misplaced a knock-down which Mauro Icardi picked up for Inter. The Argentine then slipped a pass in behind a flat-footed Naldo to his compatriot Palacio, who finished comfortably for a crucial away goal.

Wolfsburg struggled to knit its passing together throughout a frenetic opening. When not in possession the Wolves had to double-up on the ex-Bayern livewire Xherdan Shaqiri, and this left pockets of space elsewhere for Inter to exploit. 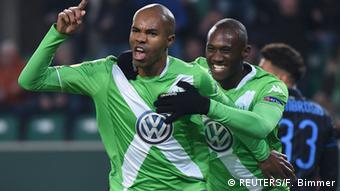 Naldo put Wolfsburg back on level terms with a bullet Header.

In an end-to-end game, Hernanes missed a good opportunity for the visitors on 20 minutes following another fast counter-attack led by Shaqiri, before Schürrle fluffed a chance for Wolfsburg after good interplay with Bas Dost.

On 27 minutes though Wolfsburg pulled level against the run of play. Juan Pablo Carrizo produced a reflex save to deny Daniel Caligiuri from a deep Ricardo Rodriguez cross, and from De Bruyne's resulting corner the Inter stopper was powerless to prevent Naldo's bullet header finding the roof of the net for 1-1.

It was a 19th assist in 33 Bundesliga and Europa League appearances this season for the influential Belgian.

While Dost was being starved of service, Schürrle was having a night to forget and the 30 million euro-man was replaced at half-time by Christian Träsch. With Träsch given a license to roam in the second period, Wolfsburg looked more dynamic in attack.

De Bruyne struck for 2-1 on 62 minutes after an attempted clearance from Carrizo failed to progress beyond the white line of his own box. Vieirinha seized on the loose ball and squared for the Belgian to slot home.

De Bruyne then curled in his second of the night from a direct free-kick on 75 minutes, before missing a golden chance for his hat-trick from a narrow angle in injury time.

It would have capped a perfect performance from the No.14 and a dream night for Wolfsburg, but Dieter Hecking's team will nevertheless entertain genuine hopes of reaching the Europa League quarterfinals for only the second time in its histroy.

The team takes a two-goal cushion to the San Siro for the second leg of the tie next Thursday, March 19.

In the pick of the night's other Europa League ties, Fiorentina were held to 1-1 by AS Roma in an all-Italian encounter, defending champions Sevilla won 3-1 away at felllow Spanish side Villareal, and Napoli beat Dynamo Moscow 3-1 in Naples.