New online interactive illustrations make datasets, statistics easier to understand. Some European designers wonder if newsrooms might be able to turn this service into a revenue stream. 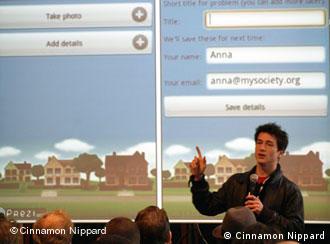 On Tuesday, the British website OpenSpending.org launched a new visualization of the Italian government's annual budget, as it has already done for the British, German, and American governments, among others.

The new visualization makes it easy to understand that the Italian government spends the largest single portion of its annual budget on pension and wage subsidies, at 285 billion euros ($377 billion) for the most recent year that data is available, 2008.

Over the past few years "data journalism" has become one of the latest buzzwords in newsrooms and blogging circles. In simple terms, data journalism is a combination of journalism, design and computer science where stories are conveyed through graphic and sometimes animated visualizations of data.

At last week's Re:publica conference in Berlin, which focuses on the German-speaking Internet, many European developers highlighted the new insights gained by data visualization and explored how newsrooms and other online media sites might be able to figure out how to make money from this kind of data. 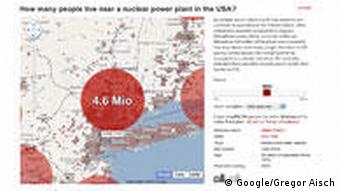 While much simpler data visualizations, like pie-charts and bar graphs have illustrated data before, online data visualizations allow much more creativity and flexibility in terms of being able to understand the scope and scale of a particular data set, like a national budget.

In recent months, media organizations around Europe, like the British newspaper The Guardian also publish their raw data sets and invite the public to comment and create their own visual interpretations.

"People like me can make their own visualizations and/or check the visualizations," said Gregor Aisch, a German freelance information visualizer, who works for the German newspaper Die Zeit and has also worked under contract for Deutsche Welle. He appreciates this kind of transparency from The Guardian, as well as the opportunity to work with the data sets himself.

"[I can ask]: 'Does the size of the circles exactly correlate with the numbers in the data set?' and [know if] this is the right way to go," he told Deutsche Welle at the Re:publica conference last week.

By advocating transparency, The Guardian increases its own credibility behind its reporting and its own data visualizations.

But Nicolas Kayser-Bril, head of data journalism at Owni.fr, a Paris-based, innovative online media firm, warned that like any form of journalism, data visualizations can also be used to push a particular agenda.

"There is a project by [Russian news agency] Itar-Tass in Russia that was very criticized, where they mapped all the religious places in Russia," he told Deutsche Welle. "And they apparently purposefully put mosques in there that were no longer in use, so as to convey the idea that Muslims were invading Russia." 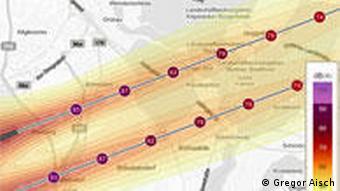 Experts say that's why as more and more of these data visualization projects become easier and easier to do, it's important for the public to think critically about where that data comes from.

From data sets to business models

But it's not just media agencies visualizing data. In fact, with these new tools, the boundaries between art, design and journalism, can sometimes get a little blurry. 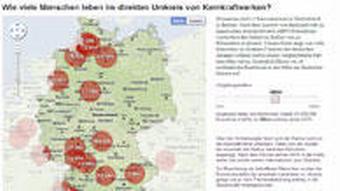 In one series of maps, Fischer used blue dots to represent photos taken by locals and red dots for tourists. On the Berlin map, some interesting patterns emerged - most locals tend to stay in the same neighborhoods and don't go to West Berlin or to the outskirts of the city.

"Its extremely interesting to see that the two populations don't mix," he said. "So from the visualization you can also build stories and see how the society's going. You can make sense out of the data and I think that's the role of the journalist. "

Using the Berlin map as an example, Kayser-Bril suggested that soon, the key will be to work out how particular data can be useful for government, business or specific interests. In fact, data designers might be able to partner with companies as well.

How and whether new business models evolve remains to be seen, but this French designer envisions that in the new media landscape data journalists will take on the role of project managers. He predicts that they will in a sense 'curate' or edit the data working with developers, statisticians and designers in newsrooms.

"If you have all the locations where the tourists are on a very fine level of granularity, where you can see street by street where they are," Kayser-Bril noted. "You can then sell this for instance to businessmen who want to open a shop in Berlin for tourists, and telling them where to go and where not to go."

Malte Spitz published a half year's worth of all of his calls, texts and Internet usage on a map. Deutsche Telekom had been required to store this tracking data under German and European law until March 2010. (01.04.2011)

The 27th annual Chaos Communication Congress is currently underway in Germany. These hackers say society should be worried about personal data collected by governments about us. (29.12.2010)

Developers around the world push for open data

The International Open Data Hackathon kicked off in Berlin and more than 50 other cities worldwide on Saturday. Developers around the world want to use public data to build better websites and mobile phone apps. (06.12.2010)