Dashed hopes - A year into Afghanistan′s unity government | Asia| An in-depth look at news from across the continent | DW | 29.09.2015

When Afghan politicians reached a deal to form a unity government last September, many hoped for a future free of insecurity, unemployment and corruption. But a year into the government, what has changed on the ground? 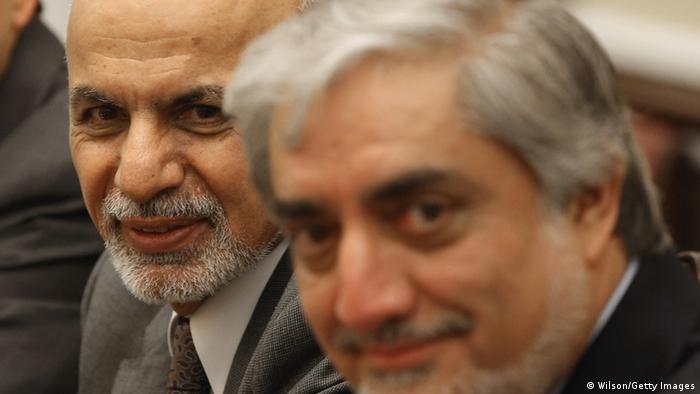 A day before President Ashraf Ghani's unity government marked its first anniversary, the northern city of Kunduz fell to Taliban fighters, drawing global media attention to the precarious security situation in Afghanistan. However, the stunning assault by the militants is hardly surprising for Afghans, even though they are dismayed by the latest development.

It's been just nine months since NATO's ISAF mission ended. The mission's primary objective was to enable the Afghan government to provide "effective security" across the war-torn nation and develop forces to ensure the country can "never again become a safe haven for terrorists."

In the case of Kunduz, it's not even been two years since the German Army or Bundeswehr ended its mission in the region and handed over security responsibility to Afghan troops. As early as April this year, there were concerns that the province's capital could be retaken by Taliban fighters.

By arming local militias and beefing up security reinforcements, the government in Kabul initially prevented the insurgent group from taking over the city. But the strategy has now failed.

And the outcome is that for the first time since being ousted from power following the 9/11 terrorist attacks in 2001, the Taliban are now once again controlling a provincial capital in the South Asian nation.

An evidence of incapacity

Afghans say the fall of Kunduz reflects not only the failure of the Afghan unity government, but also that of the entire NATO mission.

"The unity government has failed," says Fawzia from the neighboring province of Baghlan. "They have made many promises, but they haven't made good on them so far," she added.

"But instead of fighting the Taliban, the government has been looking to make compromises with them," the young woman criticized, pointing to the suffering borne by ordinary Afghans.

In Baghlan, local media recently reported about a deal that foresees ceding control of the province to the Taliban. The government has since refuted the reports.

The prevailing climate of insecurity is the main reason behind the growing unpopularity of Ghani's administration. In addition to the Taliban, Islamic State (IS) militants have been increasingly seeking to expand their presence in Afghanistan, particularly in the country's eastern provinces.

Although experts still don't expect IS to pose a significant threat, they note that the situation remains very delicate and could change rapidly.

In a survey recently carried out by DW's Dari and Pashto services on the Afghans' level of satisfaction with their unity government, 80 percent of participants said they were not satisfied with its performance. Only a mere 7.5 percent said the opposite.

The survey reflects the current mood among the nation's populace, with most people remaining pessimistic about their prospects in the impoverished nation. 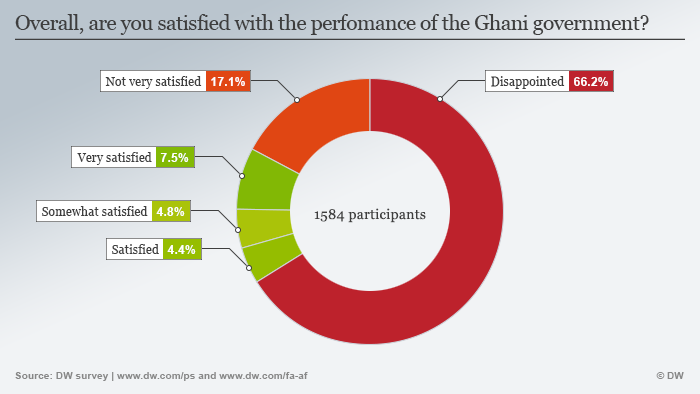 Kabir, who lives in Kunduz, says he is bitterly disappointed with Ghani's first year in office. "During election campaigns, Ghani promised that he would improve the country's economic situation and create jobs for young people," Kabir recalled.

"But so far, Ghani has failed to make any progress on these fronts. A large number of young people are either unemployed or leaving the country," the young man said. In search of a better future, thousands of Afghans are undertaking perilous journeys to other nations, including EU countries, and putting their lives at risk.

"Previously, there were many hopes that Afghans would return home to rebuild their country, but now as many people as possible are trying to leave the country," said Parwin Tufan, who lives in Farah province. "This is the biggest indication that the government has failed, and this is happening all over the country - not only here or in Kabul," Tufan told DW.

Every day, thousands of Afghans are seen lining up with their applications in front of the passport office in Kabul. Most of them want to leave Afghanistan as quickly as possible. The country's authorities issue some 2,000 passports daily.

According to United Nations Refugee Agency (UNHCR), over 77,000 Afghans applied for asylum in Europe by the end of June. During the same period in 2014, Afghans filed 25,000 asylum applications. But the real number of people fleeing the country is estimated to be far higher than the official figures.

The Afghan government and civil society organizations have launched campaigns to dissuade Afghans from leaving the country, but their efforts have so far failed to convince most Afghans about prospects in their homeland.

Taliban insurgents have seized the city of Kunduz, the capital of a key province in northern Afghanistan, according to Kabul officials. Government forces are preparing a counterattack. (28.09.2015)

Self-proclaimed "Islamic State" gunmen are reported to have attacked checkpoints in eastern Afghanistan, killing at least two people. It is the first time militants affiliated to the group have launched such raids. (28.09.2015)

More and more Afghans are arriving in Germany in pursuit of a better life as the security situation worsens back home. But what conditions do they face and how do their lives change? DW examines. (17.09.2015)