D-Day: Is joint commemoration possible? | World| Breaking news and perspectives from around the globe | DW | 05.06.2019 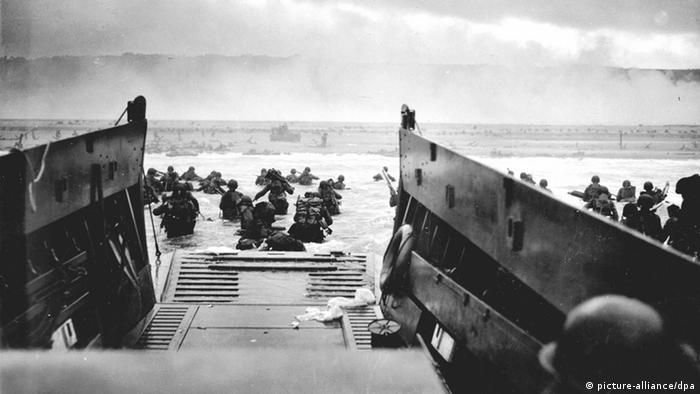 Just 15 years ago, Gerhard Schröder became the first German chancellor to participate in a D-Day memorial service. It marked 60 years since Allied troops captured the beachhead to Europe, suffering heavy losses, to liberate the continent from Nazism. Ten years later, Angela Merkel was the second chancellor to attend the ceremony. Merkel will again be present for the commemoration of the 75th anniversary; it won't be in Normandy this time, but in the British city of Portsmouth, where a large number of the landing troops embarked on June 5, 1944.

Read more:  When the Polish were refugees in Africa

These days, it is almost taken for granted that, whenever the victorious powers celebrate the last major turning point in the course of World War Two in Europe, high-ranking German officials will be in attendance. D-Day, the beginning of the end of the Nazis' hold on western Europe, is viewed in the same way as the German surrender on May 8, 1945: As Germany's then-President Richard von Weizsäcker said in 1985 on the 40th anniversary of the end of the war, it was "a day of liberation" — for Germany, too.

Nowadays, hardly anyone anywhere — including in Germany — would dispute this. Gerd Krumeich, a German historian, certainly sees it that way: "The question of whether — according to the stereotype — we were 'liberated' or 'conquered' has been consigned to the dustbin of history," Krumeich told DW. However, he added, agreement about its historical significance should not blind people to the fact that D-Day is commemorated and valued differently on either side of the Rhine — and on either side of the Atlantic. 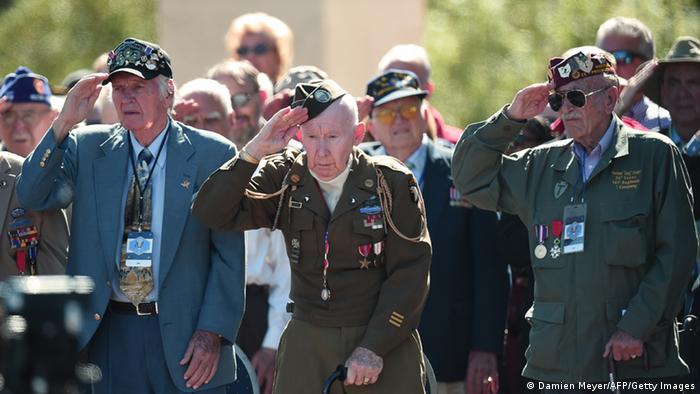 70th anniversary commemorations took place in Normandy, Wednesday's are held in Portsmouth in the UK

Not even the Allies agree on their interpretation of "Operation Overlord." This was the military codename given to the invasion, the aim of which was to involve Nazi Germany in a ground war on two fronts. On the 70th anniversary of D-Day, the American essayist Adam Gopnik wrote in The New Yorker magazine that it was seen in the USA as "an almost entirely American operation." In films, he wrote, soldiers of other nations were only there "for local color: if British, to be stuffily obstructive; if French, to provide an accent or two and a part for a woman. (The Canadians don't earn even a cameo.)" And Gopnik neglected even to mention the Poles, New Zealanders, and soldiers of other nationalities who were also involved in the battle for Normandy. 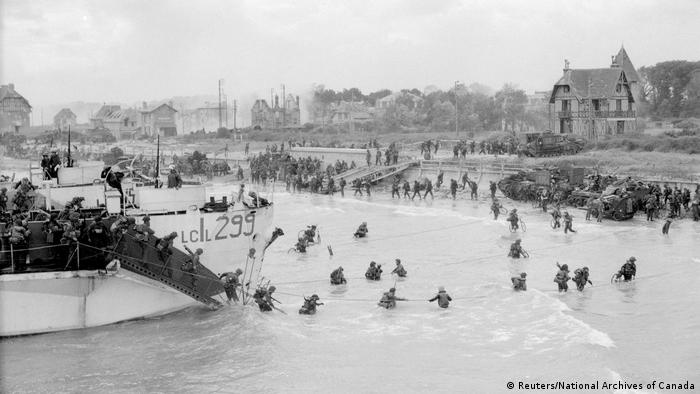 The British historian James Holland writes that this perception predominates, even in Germany, fostered in part by the way D-Day is portrayed in American films. For him, it is clear that "it was an Allied effort with, if anything, Britain taking the lead." Holland argues that although the supreme Allied commander, Gen. Dwight D. Eisenhower, was American, all the other officers in the high command were British. He points out that the Royal Navy contributed three-quarters of the warships and landing craft, and the Royal Air Force supplied two-thirds of the planes. The US forces suffered very heavy losses at the area known as "Omaha Beach," but Holland writes that the number of casualties was also comparable. British troops stormed two beaches, Americans another two; Canadian troops took a fifth. Altogether, around 4,400 Allied soldiers were killed in the Normandy landings on June 6, 1944. 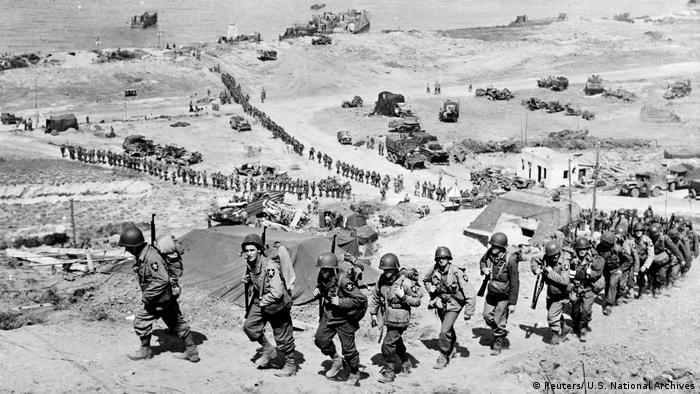 In France, D-Day veterans had to wait a long time for their achievements to be acknowledged. Their commander, Philippe Kieffer, was made a Commander of the Legion of Honor as early as 1945, but it wasn't until 1984, under President Francois Mitterrand, that the 177 French troops who served under Kieffer received a memorial of their own. It was erected in Ouistreham, where the "Kieffer Commando" and British troops took the stretch of beach, codenamed "Sword," on June 6, 1944.

Operation Overlord was always a thorn in the side of France's first postwar president, General Charles de Gaulle. He was in London, fighting for recognition for his "French Committee of National Liberation" as the only legitimate French government, while D-Day was being planned. Most countries recognized the Vichy regime, which had signed a ceasefire agreement with Nazi Germany; it had also indicted de Gaulle in absentia on charges of high treason and sentenced him to death.

The British prime minister, Winston Churchill, and US President Franklin D. Roosevelt were skeptical, but Churchill supported de Gaulle. However, he only informed him of the top-secret plans for the impending Normandy landings a few days before D-Day. Twenty years later, de Gaulle had still not got over this affront. In May 1964, The New York Times reported: "President de Gaulle has decided to attend only the ceremonies to be held in the south of France, commemorating the landings there in August, 1944. French forces participated in those." 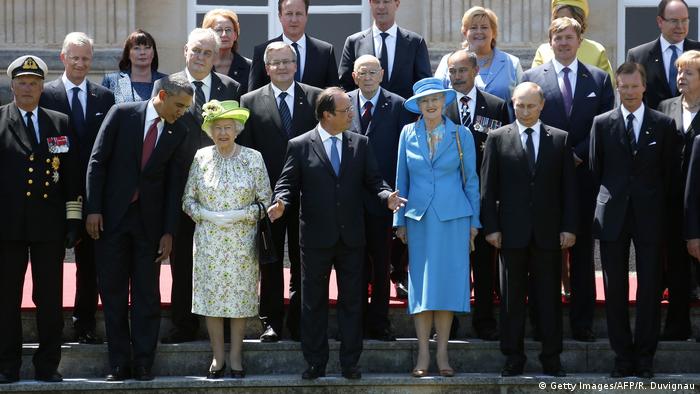 The 70th anniversary commemorations brought together most European leaders, plus Barack Obama and Vladimir Putin; it was even the site of some modest progress to tame the brewing conflict in Ukraine

'Jour J' — Liberation for the French

Quoting the French newspaper Le Figaro, the Times stated that many French were aggrieved at their president's refusal to honor the liberators in this way. Perhaps it was a case of wounded vanity; or perhaps de Gaulle, who had signed the Elysee Treaty of friendship between France and West Germany with Chancellor Konrad Adenauer the previous year, simply failed to appreciate the symbolic value of such ceremonies. 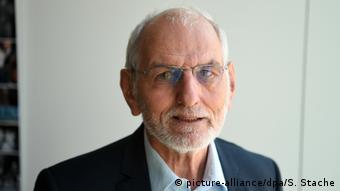 Historian Gerd Krumeich's view, however, is not dissimilar to the general's. "It's a symbolic action to demonstrate understanding," he says. "Perhaps it does need to take place, but it doesn't have particularly great significance." What is more important, he says, is the culture of remembrance among the people themselves: "In France, remembering and mourning the war dead and missing is something carried forward as part of family tradition — partly since World War One, and especially, of course, since the World War Two."

The terms "D-Day" in English and "Jour J" in French used to be generic terms for the planned start date of a military operation, but came to be firmly and specifically associated with the June 6 Normandy landings. The German equivalent, "Tag X," never underwent a similar shift in meaning — it still has only its original, generic meaning. In German, the loanword "D-Day" is now used to refer to the Allied landings of 1944. 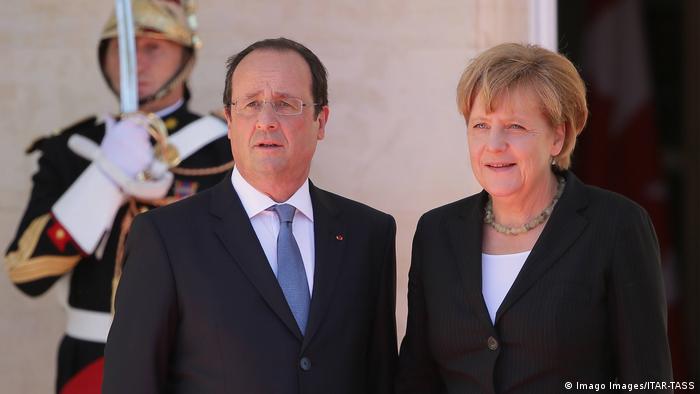 German attendance at such ceremonies, once contentious, is now the norm

Nonetheless, Krumeich says the English term is not that well known in Germany. He comments that if you were to ask his students about D-Day, most of them would probably have to look it up on Wikipedia. Krumeich says this is only logical: "To young Germans, this event was simply too long ago. And it's not connected to the direct experience of repression, defeat, occupation, all those things that are also part of commemorations." Besides, he adds, June 6 was only the beginning of the end for the Third Reich — "and that's not enough to make a big, definitive celebration out of it for everyone."

Gerd Krumeich says it's already clear from the many combined memorials — on First World War battlefields, for example: along the Somme, at Hartmanswillerkopf, at Verdun — that European countries stand together these days to commemorate the victims of their hostilities of long ago. But as far as the Second World War is concerned, he says, it might still be a little more difficult — at least for the time being.

Remains of 1,200 Holocaust victims laid to rest in Belarus

The remains of 1,200 Holocaust victims were buried after being unearthed earlier this year. Jewish community leaders criticized Belarusian authorities' decision to continue a building project at the mass grave site. (22.05.2019)

Donald Trump in the UK: Pomp and protest

US President Donald Trump has arrived in London for a three-day state visit. His meetings with the British royal family are as much a focal point of the trip as the large-scale protests. (04.06.2019)