Düsseldorf terror plot: Three in court over plan for 'IS' bloodbath

Three men accused of plotting a killing spree in the German city of Düsseldorf have appeared in court. The attack, using explosive vests and bullets, was to be financed with money extorted from the Vatican. 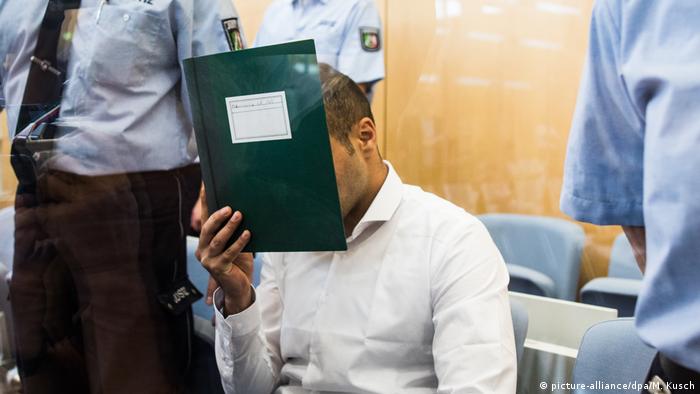 The three defendants, identified as Saleh A., Mahood B. and Hamza C., appeared in the dock on Wednesday, accused of plotting suicide bombings and shootings in the western city of Düsseldorf.

The three were "believed to have plotted to have two suicide bombers set off explosive vests and then open fire on passers-by with automatic rifles," the Düsseldorf court said in a statement.

The case was brought after 25-year-old Syrian Saleh A. went to a police station in Paris in February last year and told police he "had a certain amount of information about a sleeper cell that was read to strike in Germany." A. was extradited to Germany in October.

German authorities believe Saleh A. and Hamza C., 27, joined the extremist group "Islamic State" (IS) in Syria in early 2014. It is there that A. was said to have been given orders for the attack from the leadership level of IS. They crossed from Syria to Turkey in 2014 and were said to have reached Germany, traveling separately via Greece, between March and July 2015.

Massacre planned in the old town

Saleh A. was then believed to have drawn up plans for the attack in which two of the jihadis would detonate explosive vests in Düsseldorf's historic old town. Another attacker would then have been placed at the old town's exit, where he would have been tasked with killing as many of those fleeing the scene as possible with automatic weapons.

The two were then said to have convinced co-defendant Mahood B., 25, to join them in the plan.

The three hoped to finance their plot by selling to the Vatican a video showing proof of life of a priest who was kidnapped by IS in Syria.

All three men are accused of planning a terror attack and of being members of IS. Two of the three men were to be assessed psychologically to assess their capacity for criminal responsibility. It is unclear as to why A. had made his confession and the German newspaper "Welt am Sonntag" has reported that his statements to police appeared to be fraught with contradictions. He had also implicated a fourth man who did not appear on Wednesday.

The case is to be held over 36 days in total between June and December.