Czechs mark anniversary of liberation by American troops in WWII | Europe | News and current affairs from around the continent | DW | 06.05.2010

Czechs mark anniversary of liberation by American troops in WWII

In May 1945, western Czechoslovakia was liberated by US forces under General Patton in World War II. Amid a week of commemoration in Pilsen, a new monument to the US forces now stands in nearby Konstantinovy Lazne. 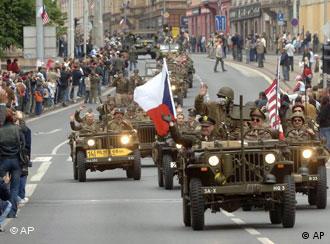 A parade in Pilsen was part of the V-Day anniversary

The town of Konstantinovy Lazne is a sleepy spa town in western Czech Republic. From appearances alone, the town doesn't particularly stand out, but historically, Konstantinovy Lazne played a significant role in the liberation of Czechoslovakia in World War II.

Now, a new monument to US forces has been unveiled in the town, making its historical significance a little more visible.

The town was also a major handling point for 50,000 German prisoners of war. The Americans left from Furth, Germany, and "charged right in, all the way to Nyrany, Czech Republic," said George Thomson, one of the soldiers involved who returned to Konstantinovy Lazne for the unveiling of the monument.

"That's where we had our first battle, and last battle, by the way." said Thomson, who was eventually tasked with guarding German P.O.W.s.

"We captured a lot of Germans, and we took their rifles and weapons, put them in the middle of the street and set them on fire," recalls Thomson, now in his 80s. "After that, we repaired German vehicles… the Germans had disabled them all, they had reached under the dash and pulled all the wires off, so our job was to hotwire them, start them, and give them to the city government." 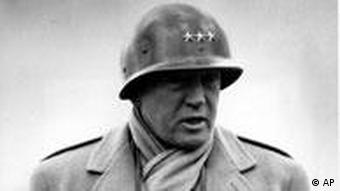 While many American troops were eager to head east and liberate the capital city of Prague, they were told to stay put in Konstantinovy Lazne.

President Harry Truman and General Dwight Eisenhower were both keen to avoid conflict with Stalin, who saw eastern Europe as the spoils of war after sacrificing millions of Soviet lives to defeat the Nazis. General George Patton was ordered to halt his advance west of Prague. In the end, most of Czechoslovakia was occupied by the Red Army, sealing its fate as a Soviet satellite state.

Being told to stay out of Prague was a source of frustration for some American soldiers.

"That was one of my father's greatest disappointments in his life," said Charles Noble, son of Colonel Charles Noble, who was in charge of the Combat Command B of the 16th Armoured Division in Konstantinovy Lazne. "Some of his troops got to within eleven miles of Prague, and it's reported that some [scouts] even got into Prague, but not the main forces."

Noble said Patton wanted to liberate all of Czechoslovakia if he could. But Patton's grandson, George Patton Waters, said Patton was simply following orders.

"[General Patton] was a warrior, not a politician," said Waters at the ceremony in Konstantinovy Lazne. "General Eisenhower was a politician. You have to remember that the Russians lost 23 million people to do what they did. We lost in the hundreds of thousands. I think that General Patton was given an order and he carried it out."

The occasion will likely be one of the last major anniversaries to be attended by the original veterans. The march of time has put the youngest of them in his mid eighties. But General Patton's grandson said their children and grandchildren would keep coming back to the sleepy town in western Czech Republic, which has formed a unique bond with the United States.

The leaders of Germany and Russia were among those who attended ceremonies in Poland to commemorate the Sept 1, 1939 Nazi attack on a military garrison, which triggered the start of World War II. (01.09.2009)

Germans have gathered throughout the country to honor military opposition to Nazi Germany and to mark the 65th anniversary of a failed plot by German resistance fighters to kill Adolf Hitler. (20.07.2009)

The leaders of Canada, France, the United Kingdom and the US have reminded the world of the sacrifices that World War II heroes made on the beaches of Normandy 65 years ago. (06.06.2009)