Czech town in the path of coal excavators | Environment | All topics from climate change to conservation | DW | 24.07.2015

Czech town in the path of coal excavators

Considering the carbon emissions from coal, one might imagine expansion of opencast coal mining in Europe to be unthinkable. But this could happen in the Czech Republic, if limits from the early 1990s are lifted. 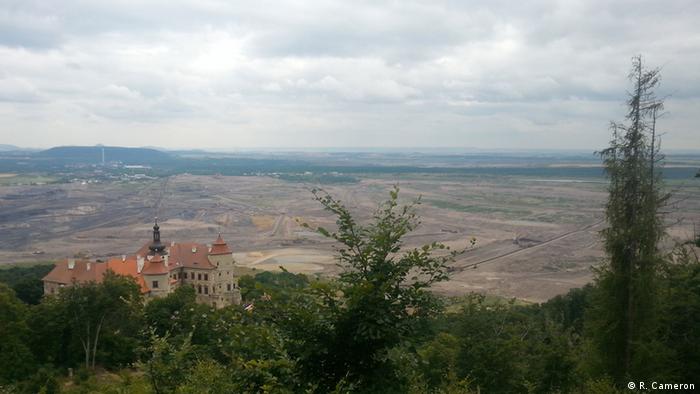 "If you look at this opencast mine, there are two thoughts that spring to mind," says Greenpeace energy campaigner Jan Rovensky as he gazes out over the lunar landscape that is the Czechoslovak Army (CSA) opencast coal mine in North Bohemia. "The first is how strong and powerful mankind is. And the second one is how stupid."

The CSA mine is one of three large opencast lignite mines in the Czech Republic's Krusne Hory, the mineral-rich Ore Mountains in the northwest of the country. It's staggeringly huge, extending virtually as far as the eye can see.

Now, the mining company controlling it wants to extend the mine even further, to access more than 750 million tons of lignite that can be found beyond the current boundaries.

But the untapped resources lie below a town - meaning that around 2,200 people would be forced to leave their homes.

The groaning sound of excavators drifts up to the top of the hill as the earth is scraped away below, allowing other colossal machines to get at the brown coal beneath. 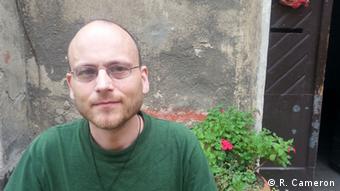 The Czech town Horni Jiretin would be destroyed if mining expansion limits were extended, says Rovensky

Clinging precariously to the densely-wooded hillside is a baroque jewel, Jezeri Castle. Once the venue for the first-ever performance of Beethoven's 3rd Symphony Eroica in 1804, today the castle's soundtrack is industrial rather than classical.

"From this place where we're standing, we can see the town of Horni Jiretin, the hamlet of Cernice, the town of Litinov, and the chemical factory in Zaluzi," Rovensky says, pointing to the settlements.

These, he says, are the towns that would be destroyed if the borders of the mines were expanded.

"Some 25,000 people will live for years at the edge of the mine - 500 meters away - and some 4,000 would lose their work because of the destruction of the chemical factory," he adds.

For the past 24 years, opencast mining in North Bohemia has been subject to strict geographical limits; the excavators can only go so far. But there's been substantial pressure to abolish those limits, which were introduced after the fall of communism to protect human health and the environment. If they are lifted, the town of Horni Jiretin - about 5 kilometers from Jizeri Castle - could find itself in the path of the excavators. 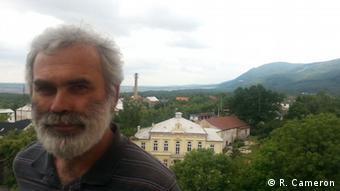 "At this moment in time, we certainly can't say that we've won," Horni Jiretin's mayor Vladimir Burt tells DW, adding that there is a lot of pressure on the town from the mining company, as well as politicians.

Burt knows better than anyone the consequences if they are not able to withstand the pressure; dirt is all that remains of Albrechtice, the town where he was born. Once nestled in the valley below Jezeri Castle, it faced a wrecking ball to make way for the coal industry in the early 80s.

Still, the mayor is optimistic about the chances for his town. "I'm convinced that common sense will ultimately prevail - and that most importantly a progressive vision of energy and the future of this country will triumph.

"That even the Czech Republic will start going in another direction," Burt says.

The fate of Horni Jiretin lies partly in the hands of the Czech trade and industry minister, Jan Mladek. He favors lifting the limits at a different brown coal mine - expansion there could take place without demolishing any homes. So, for now at least, Horni Jiretin will not be demolished. But he says he can't make any promises.

"At this moment we've done a lot of analysis of coal consumption, and we came to the conclusion that we can say that coal under Horni Jiretin is not necessary," he tells DW.

However, Mladek adds that a nuclear power plant in Dukovany could be closed earlier than expected, with Austrian environmentalists fighting a noisy campaign against Czech nuclear power. If that happens, a source of energy must be found elsewhere.

"Maybe it would be very nice to local people [to say their town is safe], but it would not be responsible because it can happen very easily that the question will be reopened," Mladek says. 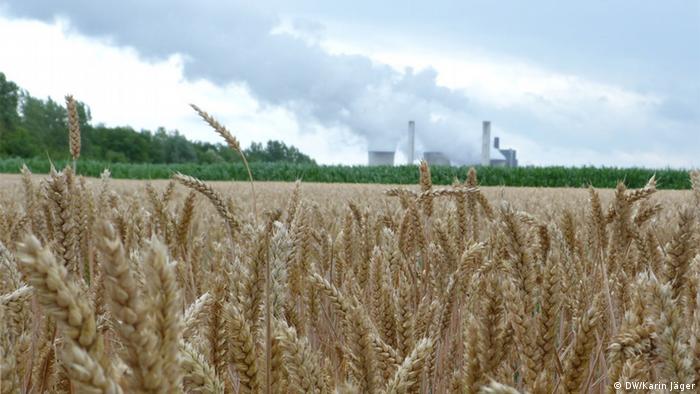 The Czech Republic has substantial reserves of brown coal, which is burned in plants like this one

Back in Horni Jiretin, Greenpeace activists are busy putting together a camp intended to host dialogue between activists and local people. Burt, the mayor, says despite the town's uncertain future, it has an unusually young population - that wants to stay.

"If the limits are to be broken, then we have to move. And it's not just about the buildings; it's the life here, you know," says Radek Vrabel, a 21-year-old student born in the neighboring city of Most.

"We want to have a normal life, we want to relax," Vrabel adds. Once described as "the jewel of North Bohemia," the the city's historic old town was demolished by the communist regime in the 1960s and 70s for coal.

"It's pretty disruptive … to not be sure if you can live here or not," adds Vrabel.

Environmental activists point out that the Czech Republic is the fourth biggest exporter of electricity in Europe, and the seventh-largest in the world. It has six nuclear reactors, substantial deposits of both black and brown coal that can be exploited without destroying houses and uprooting people, and lots of solar power.

They say that demolishing towns shouldn't be an option. But it's an option the government is clearly unwilling to take off the table.

British plans to build two new nuclear reactors has drawn the ire of renewable-energy supporters. Now, the government in Vienna has filed a lawsuit, arguing that the project violates EU law. (06.07.2015)