The Czech Republic and Slovakia have again rejected of quotas for redistributing asylum seekers from southern Europe as suggested by the EU commission and backed by the German and French leaderships. 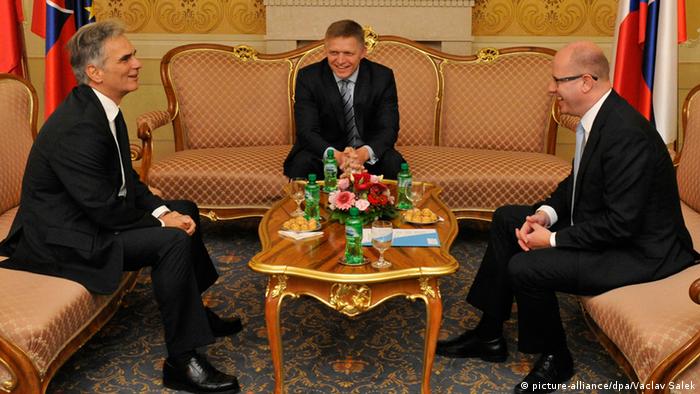 Slovak Prime Minister Robert Fico (pictured center above) described talk of quotas as "irrational," while hosting his Czech and Austrian counterparts in Bratislava.

"Migrants arriving in Europe do not want to stay in Slovakia. They don't have a base for their religion here, their relatives, they would run away anyway," he asserted. 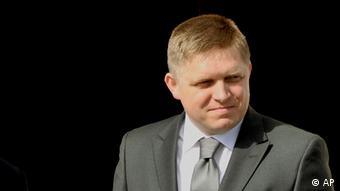 Fico remained at odds on Monday with Slovak President Andrej Kiska who on television said accepting a few hundreds or thousands of migrants would not threaten Slovak security or culture.

"Nobody who has a heart wants to stand by and watch that much human tragedy," Kiska said. "An (EU) agreement is in the interest of all.

Visiting Bratislava, Czech Prime Minister Bohuslav Sobotka said any measures within the EU for migrants should be voluntary.

"We want to help … financially, by (providing) experts, and, of course, we will take care of some of the refugees who get asylum, but solely and exclusively on a voluntary basis, " Sobotka said. 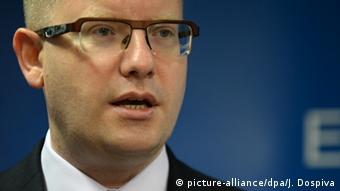 Austrian Chancellor Werner Faymann said any quota formula must cater for what he called genuine refugees but exclude what he termed economic migrants.

"I am firmly convinced that you can secure the outer border (of the EU) only when you know what to do with the refugees from war," said Faymann of Austria's center-left Social Democrats.

Reuters said details of the EU commission's plan circulating in Brussels for 160,000 asylum seekers arriving in Greece, Hungary and Italy would allocate some 40,000 to Germany and nearly 31,000 to France.

EU officials said the 160,000 comprised 40,000 proposed by the commission in May plus 120,000 contained in a new proposal to be unveiled by commission president Jean-Claude Juncker on Wednesday.

The concept of redistribution has the backing of German Chancellor Angela Merkel and France President Francois Hollande.

EU interior ministers are to debate the commission's proposals at an emergency meeting next Monday in Brussels.

The three main countries used by migrants for entry into the EU - Greece, Italy and Hungary - would, according to Reuters, be largely excempt from taking in a share of the refugees.

Slovakians vote 'no' to taking in Austria's homeless asylum seekers

A village in Slovakia has strongly rejected Hosting asylum seekers to ease pressure on overcrowded shelters in neighboring Austria. The plan, approved by the interior ministers of both countries, was put to a local vote. (03.08.2015)