Czech Government Could Collapse, Says Premier | Europe| News and current affairs from around the continent | DW | 08.06.2008

The Czech government could collapse this autumn, months before it takes on the European Union's rotating presidency, Prime Minister Mirek Topolanek was quoted as saying. 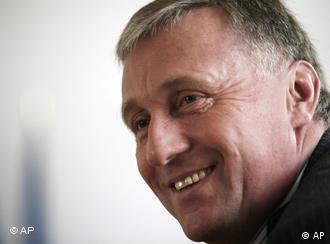 Topolanek said the coalition may crumble by autumn

"If [the coalition] does not sort itself out by the summer and adhere to its majority, autumn could see the end of the government," the daily Mlada Fronta Dnes reported him as saying on Saturday, June 7.

Topolanek's coalition secured 100 of the 200 lower house seats in the June 2006 general election and won a vote of confidence seven months later only with help of two opposition defectors, who have since become independents.

Dissidents in all three coalition parties -- Topolanek's right-wing Civic Democrats, the centrist Greens and Christian Democrats -- are threatening to derail votes on budget-tightening reforms, a plan to host US missile defense radar and a scheme to compensate churches for properties seized during the communist era.

The fragile government, whose four-year term expires in 2010, is due to preside over the EU in the first half of 2009 at a time when the 27-member bloc is to start overhauling its institutions.

The Czech parliament narrowly re-elected Vaclav Klaus, a right-wing Euroskeptic as the country's president on Friday, Feb 15, averting a political crisis and ending a bitter campaign. (15.02.2008)

A Chinese food company opened its first European plant earlier this week in a Czech village, seeking to turn the sleepy spot into a launching pad for its European and North American expansion. (01.06.2008)

German War Dead to Be Reburied in Czech Graves

Germany's war graves authority has signed an agreement for the remains of some 4,000 German soldiers killed in former Czechoslovakia during World War II to be buried at a special site in the western Czech town of Cheb. (27.05.2008)