Schoolchildren in Prague have helped gather 170,000 signatures to help Sir Nicholas Winton win the Nobel Peace Prize. Their efforts - and the 103-year-old's story - are extraordinary. 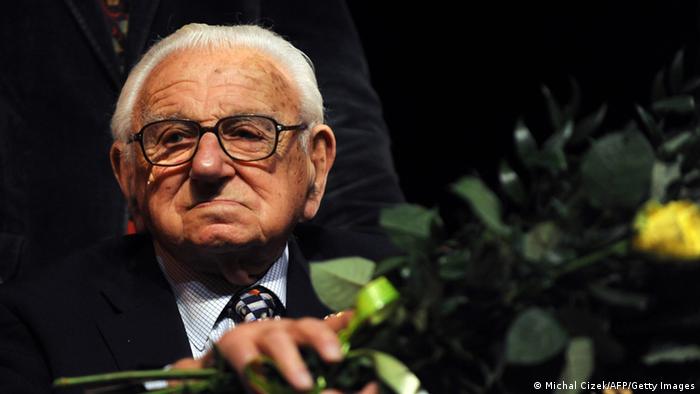 Miroslava Nemcova, speaker of the lower house of parliament in the Czech republic, recently announced to reporters that she was formally submitting a nomination for Sir Nicholas Winton to be awarded the 2013 Nobel Peace Prize.

Standing beside her were pupils from Open Gate high school in Prague. Together, they have collected a fresh batch of 13,000 signatures. The total number of signatures in support of Sir Nicholas Winton now stands at 170,000.

"We're not just trying to gain signatures to support Sir Nicholas Winton's nomination for the Nobel Prize," said Dominika Kourilova, one of the students at Open Gate. "We're also trying to spread his story around the world. Because not everyone knows about it."

Czech officials have already nominated Sir Nicholas in two previous years. With the prize only awarded to living people, time is running out for supporters of the 103-year-old man.

The story of Sir Nicholas Winton has been told and retold in documentaries, films and books. It remains an extraordinary one.

"I knew what it meant"

In 1938, shortly after Britain and France had agreed to give the Sudetenland - the largely German-speaking areas of Czechoslovakia - to Hitler and Nazi Germany, Nicholas Winton, then a young British stockbroker, visited Prague. He was appalled by the condition of the refugees, shivering in squalid camps. Some were Jews or anti-Nazi activists from Austria and Germany who had sought refuge in Czechoslovakia. Others were Czechoslovaks who had fled the Sudetenland into the country's interior. Nothing, it seemed, was being done for the refugee children. 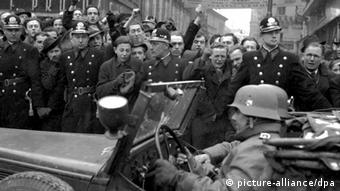 Parts of Czechoslovakia were annexed in September 1938, with the country occupied by March 1939

"When I arrived in Prague, I pretty much knew what to expect," Sir Nicholas Winton told DW in an interview in 2011. "And when I saw what was happening to a lot of the anti-Hitler people, including the Jews, that they were losing their jobs, that the doctors weren't allowed to practice, that the Jewish children weren't allowed to go to school anymore. I knew what it meant."

Nicholas Winton was certain that Hitler would occupy the rest of Czechoslovakia. He was also certain that the fate awaiting the country's Jews was not a happy one.

He began organizing the transport of children out of the country, mostly to new homes in Britain. Over the next nine months - even after Germany had invaded Czechoslovakia in March 1939 - special trains left Prague for London, carrying a total of 669 children to safety. Among them was Milena Fleischmannova, who boarded one of the trains with her younger sister Eva.

"I remember being on the platform," said Milena Fleischmannova, who boarded one of the trains with her younger sister Eva. "I certainly remember my grandparents being there, and my mother. I have an autograph book. My grandfather had actually signed it at nine o'clock in the evening on the evening of my departure. He says, 'Remember to be a faithful daughter to your country, to your parents, and always remember your grandfather, who loves you very much.'"

Today, Milena is now Lady Milena Grenfell-Baines. She was lucky enough to join her father, an opponent of Hitler who managed to escape Prague, in England. She was later joined there by her mother, who escaped in 1940. Many of the other children never saw their parents again. 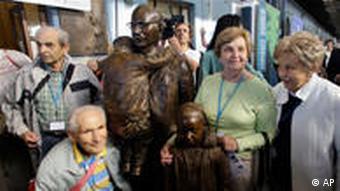 As for Nicholas Winton, his story would have been remarkable enough, but he never told anyone - not even his wife - about what he had done before the war. One day, his wife was poking around in the attic when she came across an old suitcase containing odd-looking documents about children from Czechoslovakia.

That started a series of events in motion, culminating in a legendary scene on British television in the 1980s, when an unsuspecting Nicholas Winton, sitting in a studio audience, was informed that dozens of the children he had saved, now themselves in their 60s and 70s, were sitting in the audience alongside him.

The rest is history. He has been knighted and has received countless other awards. His story has been turned into an award-winning documentary. There have been regular reunions in London and Prague. And now there is a campaign to have him nominated for the Nobel Prize.

And this time, a determined group of Czech secondary school children hope, the committee in Norway will hear them.

A special train left Prague for London on Tuesday to mark the 70th anniversary of the mass transport of Jewish children from Czechoslovakia. It was organized by Nicholas Winton to save them from Nazi camps. (01.09.2009)

Germany and its southeastern neighbor have had a checkered past. But 20 years after a friendship treaty, war wounds appear to have largely healed. That's a good thing as the German Chancellor visits Prague. (03.04.2012)

A film based on the true story of a Nazi who helped save 200,000 Chinese civilians from the Nanking Massacre has dominated the German Film Awards, winning prizes for best film, actor, art direction and costume design. (25.04.2009)