The Cyprus government has postponed an emergency session of parliament to debate and vote on a controversial levy imposed as part of an EU bailout deal. Several parties have said they will not back the tax. 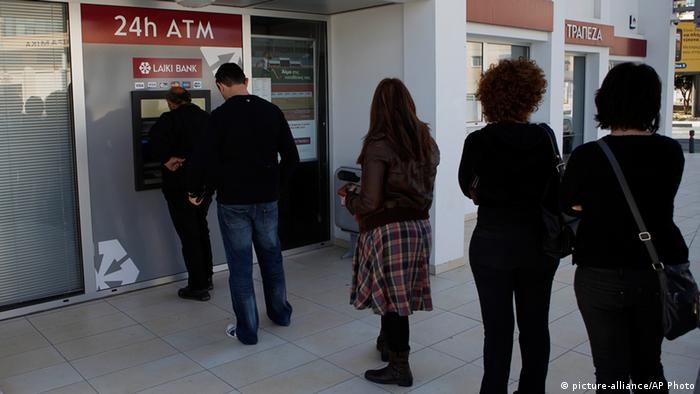 Cyprus's President Nicos Anastasiades on Sunday postponed an emergency parliament session which had been called to debate and vote on a rescue package worth at least 10 billion euro ($13.08 billion), struck by eurozone lenders early Saturday.

Fears of a run on Cypriot banks

However, in exchange for the rescue fund, Cyprus agreed to levy a one time tax of 9.9 percent on deposits of over 100,000 euros held in the country's banks. A tax of 6.7 percent will be applied to anything under 100,000 euros. The levy is expected to generate 5.8 billion euros.

State television said the parliamentary debate was postponed to "ensure MPs were fully aware of the situation and were better informed."

The vote was rescheduled for Monday, but an exact time has not been given. However, the government needs to ratify the savings levy before banks open Tuesday, after the island's holiday weekend is over.

Regardless of the postponement, the levy faces a tough run in parliament as several parties have said they will not back the tax.

Anger across the island

Cypriots reacted with shock and anger Saturday morning, rushing to local cooperative banks and ATM machines in an effort to protect their savings from the new tax.

The cooperative banks, which represent about a fifth of the island's banking sector, remained open only for about an hour before shutting down to prevent a run on withdrawals. However, people continued to have access to funds through ATMs.

Anastasiades said thousands of small businesses would also have gone bankrupt because of cash flow problems without the deal.

Trying to find the right policy for the crisis

Recession, unemployment, the rise of extremist parties - the ongoing crisis is a big strain on Europe. Thursday's EU summit is a search for solutions, but the huge differences will be hard to bridge. (14.03.2013)

"Either we could choose the catastrophic scenario of a disorderly default or a painful but controlled management of the crisis that definitively ends the uncertainty and provides a starting point to kick-start the economy," he said.

"The assistance is warranted to safeguard financial stability in Cyprus and the eurozone as a whole," Eurogroup President Jeroen Dijsselbloem told reporters after the meeting early Saturday. Cyprus' gross domestic product (GDP) makes up less than 0.2 percent of the eurozone's overall output.

In mid-2012, the eurozone country asked for international aid of at least 17.5 billion euros ($22.3 billion), the majority of which would go towards rescuing its ailing banks, which were affected by the sovereign debt restructuring in neighboring Greece last year.

However, because the loan would have amounted to nearly the size of Cyprus' entire economy, creditors lowered the number to a more manageable amount of debt. Cyprus is the fourth eurozone country to receive a sovereign bailout.