Cyanide pollution in Tianjin much higher than expected

Chinese officials have detected extremely high levels of cyanide in the water near the sites of massive blasts that tore through Tianjin last week. The air is safe to breathe, according to the authorities. 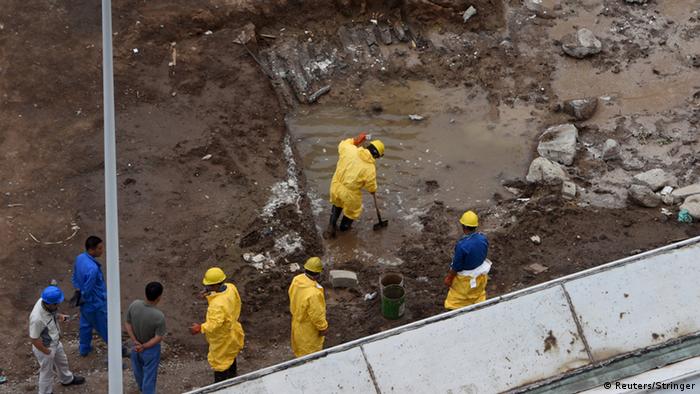 "An excessive level of cyanide was detected in eight locations with the highest reaching 356 times" the permitted level, the agency said.

Previously, Chinese officials said that test had shown cyanide at only 28 times the allowed limit. The bureau did not explain the spike.

The pollution stems from two massive explosion at the key port city of Tianjin last week, which killed at least 114 people. The death toll is expected to rise, as there are dozens of people still missing.

Some 700 tons of sodium cyanide were at the site of the blasts, which followed a fire in a warehouse used to store dangerous chemicals.

The authorities have repeatedly stated that the air is safe to breathe for the 15 million citizens of Tianjin. In addition, the recovery personnel have built a dam of sand and earth, encircling a 100,000-square-meter (120,000-square-yard) area around the blast sites to prevent leakage.

The water inside the central crater is also polluted by cyanide, according to the state broadcaster CCTV.

"All the polluted water is contained in the cordoned off area," environment protection official Tian Weiyong told reporters. "We won't drain it until we clean it up."

Despite the assurances of safety from the government, locals doubt that poisonous chemicals might still affect the Chinese metropolis, and the global environmental environment group Greenpeace has also urged caution.

In addition to environmental concerns, there are also worries about structural damage caused by the blasts.

The company that owned the warehouse, Ruihai Logistics, allegedly circumvented safety regulations, according to Chinese state agency Xinhua. As a result, the warehouse was located only 560 meters (612 yards) from the nearest apartment block, instead of the recommended 1,000 meters.

The city authorities promised to compensate the citizens whose apartments had been damaged in the blasts. However, the payoff would have to wait for experts to evaluate some 17,000 residents affected by the explosions.

"After that is done, it will be decided which of them would be demolished, renovated or bought off," Tianjin deputy mayor Zong Guoying said.