Curtain Falls on Media Chancellor | News and current affairs from Germany and around the world | DW | 10.10.2005

Having relinquished his grip on the reins of power, Gerhard Schröder appears set to bow out of the new government under Angela Merkel's leadership. But up to the last, he was mindful of the legacy he would leave behind. 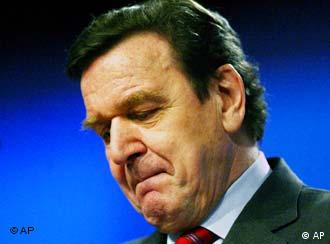 Schröder is bowing out

Sources in Gerhard Schröder's Social Democratic Party (SDP) said Monday that, despite appeals from within the party that he become vice-chancellor, Schröder will not play a role in the country's new coalition government under conservative leader Angela Merkel.

It's a life path that took the charismatic Schröder from humble beginnings in Lower Saxony, to the top of one of the most powerful nations in Europe.

Schröder was born in Mossenberg in 1944, never knowing his father, a soldier who was killed in Romania during World War II. Schröder worked as an ironmonger's apprentice and a construction worker before completing his intermediate high school certificate at the age of 20. 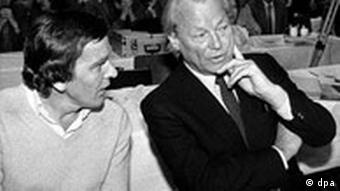 Gerhard Schröder with Willy Brandt in 1980

In 1966, Schröder began pursuing a law degree, taking his state law examinations in 1971 and 1976. A fledgling Marxist and environmentalist, Schröder idolized SPD chancellor Willy Brandt throughout the 1970's and particularly respected his Ostpolitik, which aimed for improved relations with communist Eastern Europe and the Soviet Union.

Moving through the upper echelons of the SPD

Schröder moved into then-SPD leader Rudolf Scharping's shadow cabinet as the minister responsible for economic, traffic and energy policies and quickly moved up into the Social Democrats' higher echelons.

He soon became part of the party's leading "troika" along with Scharping and Oskar Lafontaine. Schröder's popularity grew and a 1997 poll showed that he, and not Lafontaine, was the people's choice for candidate most likely to replace incumbent Chancellor Helmut Kohl. It was no surprise that his name soon became linked with Germany's top job.

After Schröder won the state elections in Lower Saxony in March 1998, a vote which was expected to determine who would face Kohl in national elections, with 47.9 percent of the vote, SPD Chairman Franz Müntefering then announced that Schröder would be the party's candidate for chancellor. On Sept. 27, 1998, Gerhard Schröder was chosen to be the next leader of Germany, unseating Kohl, who had held the top job for 16 years.

Schröder celebrates being elected chancellor in 1998

Schröder represented the new and optimistic face of Germany. While Kohl had overseen the reunification of the country and earned a reputation as a respected elder statesman, Schröder projected a new, more dynamic image. He seemed youthful, telegenic and witty -- a brisk, media-savvy politician in a stodgy political landscape. He courted industry with his pro-business approach and romanced the public with fresh new ideas and promises of increased employment. At one point, he said his government would not deserve to stay in power if it failed to cut the jobless rate substantially. 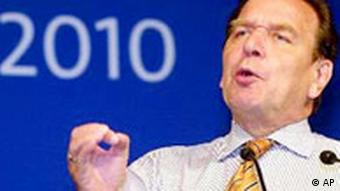 The honeymoon period was never going to last for the entire four years of his first term in office. In fact, it looked as if the SPD would again go into opposition as the 2002 federal elections approached. With the public railing against Schröder's Agenda 2010, a series of hard-hitting welfare and labor-market reforms, the chancellor narrowly escaped being voted out of office. He was saved partly by fighting the election on an anti-war stance as military action in Iraq grew increasingly likely and by his reactions to severe floods in eastern Germany where he cut a statesman-like figure that resonated with voters.

Unemployment proved to be Schröder's albatross

With the election won, the German people turned their attention back to Schröder's early promise of more jobs. As time wore on, the continuing high unemployment rate became the most conspicuous failure of his chancellorship. While fighting a national recession driven by a global downturn in the economy, Schröder watched as Germany's jobless exceeded four million, almost back to the level he inherited from his predecessor. 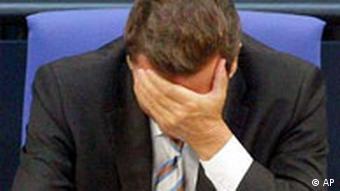 His widely unpopular reform programs cost him a good deal of his popularity. That, and the failure of the reforms to quickly rev up the economy led to the thrashing the SPD sustained in state elections in May in North Rhine-Westphalia, traditionally an SPD stronghold. The result prompted Schröder's radical step of calling for a vote of no confidence, which could trigger early elections.

Schröder is first German chancellor whose life, or youth at least, was not dominated by World War Two. Analysts say he has represented a Germany that is now ready to flex its muscles on the world stage. For the first time in the nation's post-war history, German troops have been engaged in operations abroad, joining peacekeeping operations in Kosovo and Macedonia, and combat operations in Afghanistan.

Leaders of all German mainstream parties are meeting today to discuss the ramifications of early national elections this fall after the ruling Social Democrats suffered a blow in crucial state elections Sunday. (May 23, 2005)

A Tale of Two Social Democrats

Tony Blair and Gerhard Schröder both wanted to reform Europe's social democracy. William Patterson, an expert on Germany, explains why Blair could win three elections while the end of Schröder's political career looms. (May 25, 2005)

German Chancellor Gerhard Schröder continues to keep silent about the logistics of a confidence vote needed for proposed early elections much to the chagrin of members of his own center-left coalition. (June 7, 2005)