Cruz on Brussels: Police should 'patrol and secure Muslim neighborhoods'

On the heels of terrorist attacks in Brussels, Ted Cruz has promoted boosting police presence in places where Muslims live. As two more state primaries got underway, his rival Trump blamed immigration for the violence.

Republican President hopeful Ted Cruz suggested police deploy extra vigilance in Muslim neighborhoods in light of the terrorist attacks in Belgium on Tuesday. As Americans in the states of Utah and Arizona headed to the polls to vote in their primaries, Cruz released a statement titled: "We Can No Longer Surrender to the Enemy Through Political Correctness."

"We need to empower law enforcement to patrol and secure Muslim neighborhoods before they become radicalized," said the Texas senator in his statement.

Echoing the firebrand rhetoric of rival Donald Trump, Cruz added that the US ought to refuse entry to refugees fleeing the area controlled by "Islamic State" terrorists (IS). The jihadist group has already claimed responsibility for the bombings at a Brussels airport and metro station that killed at least 31 people and injured dozens.

Trump, for his part, implied in an interview with Fox News that the Brussels attacks were the result of Muslim immigration. "Brussels was a beautiful city, a beautiful place with zero crime, and now it's a disaster city. A total disaster," he told the broadcaster.

On the other side of the aisle, Democratic frontrunner Hillary Clinton said ahead of Tuesday's primaries that the events in Brussels were a reminder of "how important it is to have a steady, smart, strong approach to keeping us safe."

Clinton mocked Trump's implication that terrorism could be stopped by stemming immigration, reminding the public at a campaign event in Washington state that many jihadists from the West who plot such attacks are self-radicalized on the internet. 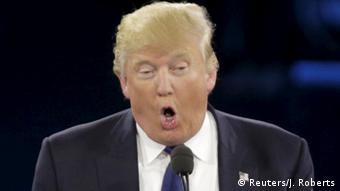 Donald Trump has repeatedly called for a wall on the Mexican border to curb immigration, promising to make Mexico City pay for its construction

"Some of my opponents want to build walls and shut the world off. Well you tell me, how high does the wall have to be to keep the internet out?" said the former secretary of state, referencing the billionaire's oft-mentioned plan to build a wall on the US-Mexico border.

There has been relatively little polling done in Arizona, but both Trump and Clinton were leading by safe margins. Utah, however, promised to be more of a mystery as the real estate mogul is extremely unpopular with the state's many Mormons. The last poll for the Democrats put Vermont Senator Bernie Sanders ahead of Clinton.

Democrats in the state of Idaho were also set to hold their primary on Tuesday, but with sparse population and little polling, the political establishment seemed to have little interest in the western state.

Across Europe famous landmarks are lighting up the night sky in a display of solidarity with the residents in Brussels. The illumination of the Belgian flag in Paris, Berlin and Rome is a display of unity against terror. (22.03.2016)

World leaders express sympathy and solidarity with Brussels after attacks

German Chancellor Angela Merkel said the terrorists who attacked Brussels were "enemies of all the values that Europe stands for." It was a sentiment echoed by most world leaders. (22.03.2016)