The tremor was felt in Zagreb, some 50 kilometers from the epicenter, where panicked residents ran into the streets. Several deaths have been reported, and Slovenia's nuclear power plant has been shut as a precaution.

The quake struck at around 1130 GMT near the town of Petrinja, around 50 kilometers (30 miles) south of the capital, Zagreb, according to the United States Geological Survey.

The tremors were also felt in neighboring countries Bosnia and Serbia.

Officials said a 12-year-old girl died in Petrinja, while five other people were killed in a nearby village.

Prime Minister Andrej Plenkovic, who rushed to Petrinja, said: "We have information that one girl was killed. The army is here to help. We will have to move some people from Petrinja because it is unsafe to be here."

Journalist Dalibor Dobric in Zagreb told DW there were also reports of injuries in the capital, adding that parts of the city were without electricity.

The search through the rubble for survivors is ongoing.

Mayor says 'half the city no longer exists'

Tuesday's quake comes a day after a smaller tremor struck in the same area.

"My town has been completely destroyed, we have dead children,'' Petrinja Mayor Darinko Dumbovic told the broadcaster HTV.

"This is like Hiroshima — half of the city no longer exists," he said. "We need help."

Images of the town, which is home to around 20,000, showed collapsed roofs and streets strewn with bricks and other debris. 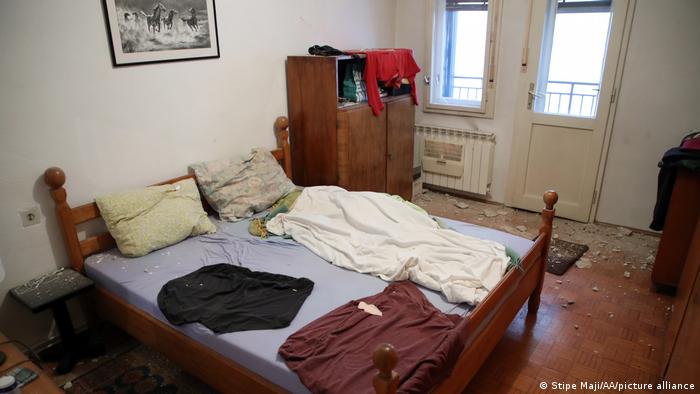 An inside view of a house after an earthquake of a magnitude around 5.0 hit the town of Petrinja in central Croatia on Monday.

Tomislav Fabijanic, head of the emergency medical service in Sisak near Petrinja, said there were many injured in Petrinja and in Sisak.

"There are fractures, there are concussions and some had to be operated on," he said,

Slovenia's STA news agency said that the country's sole nuclear power plant, which is 100 km from the epicenter, was shut down as a precaution.

"We are ready to support," European Commission chief Ursula von der Leyen wrote on Twitter, adding that the bloc's civil protection team was "ready to travel to Croatia as soon as the situation allows".

Charles Michel, president of the European Council, said "our thoughts go out to the injured and frontline workers."

The last big quake struck the Mediteranean country in the 1990s when the village of Ston was destroyed.