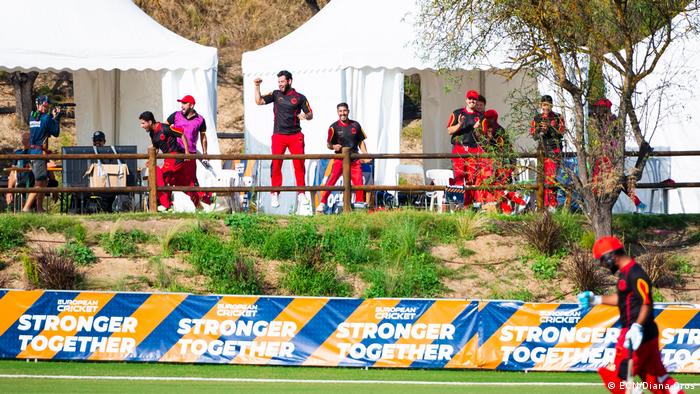 Germany celebrate a dramatic, last-ball win against Italy at the ECC

Twelve years after arriving from India with his mother, Rohit Singh captained for Germany at the European Cricket Championship (ECC).

"Playing cricket is like oxygen to me," Singh told DW.

Despite Singh's 237 runs and six wickets, Germany failed to move on to championship week at the Euros-style, T10 tournament — a shorter, more digestible form of cricket that encourages big hitting.

In two weeks, Singh and Germany will take on the even bigger task of T20 World Cup qualification. But does anyone in Germany know or care? 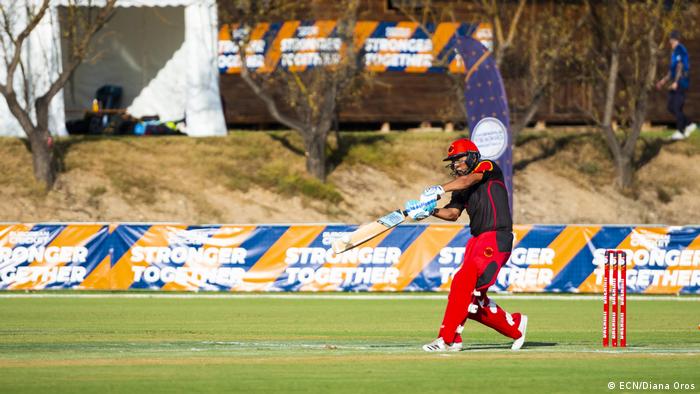 Most of Germany's cricket players are from abroad

"We know that 95% of our players in the men's game are from Bangladesh, India, Afghanistan, Sri Lanka, but we can only talk about integration if Germans are also playing," German Cricket Association (DCB) general manager Brian Mantle said in an interview with DW. "If they don't know about cricket then they won't come."

With the ECC being broadcast in over 100 countries and the network that organizes it — the European Cricket Network, ECN — boasting over a million Facebook followers, visibility is no longer an excuse.

Although Germany's cricket history dates as far back as 1858, having no perceived cultural roots has long hampered the sport's attempts to branch out into wider German society. Spain is playing host to the 2021 European Cricket Championship, at the Cartama Oval in Malaga

The late 1980s and early 1990s were a formative time for modern Germany, as the country was reunified, but also for cricket. The DCB was founded in 1988 and, after reunification in 1990, Germany joined the sport's governing body, the International Cricket Council (ICC).

Volker Ellerbeck, who grew up in West Berlin, lived through this transformation, having returned from the United Kingdom with a love of cricket after a year of studying at Oxford.

While playing with a group that called themselves "refugees from Thatcher's England" on pitches left behind by the British army, he befriended West Indian janitors and truck drivers who taught him how to bowl.

Eventually, Ellerbeck found himself representing Germany in international tournaments. Throughout, Ellerbeck admitted, tensions between those from cricket cultures and non-cricket cultures were so deep-rooted that many European finals were lost because of a lack of team spirit.

Cultural clashes remained into the mid-2000s, as some domestic clubs kept to themselves, while others welcomed a mix of cricket backgrounds. Few actively recruited those from non-cricket cultures. 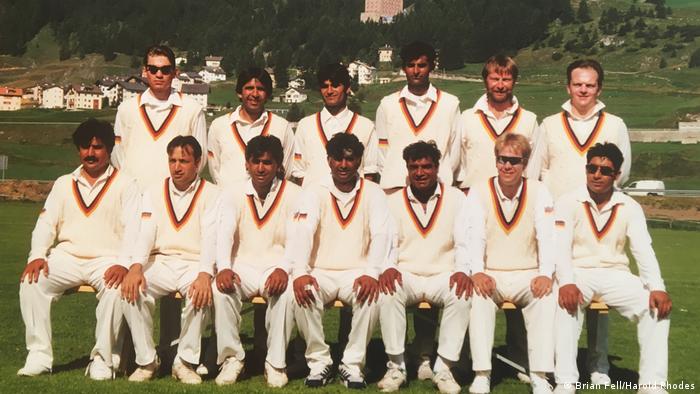 For 33-year-old Max Höck, a German player born in the small town of Tegernsee near Munich, there was no concept of cricket until a schoolteacher from Manchester taught him technique from a textbook.

Höck would go on to play for Germany's men's first team and, while his love for cricket was always at the forefront, playing the sport also opened his eyes.

"As a white German, cricket allowed me to work through my racial prejudice earlier than others," he told DW. "You listen to others and realize that your own perspective is strange, that it's a Western perspective."

Höck felt cricket gave him the chance to develop in a way the rural Germany of his youth could not.

"In Germany, I think there's a feeling that we're the first generation who could manage our history, and use contact and exchange to work through it," said Höck. 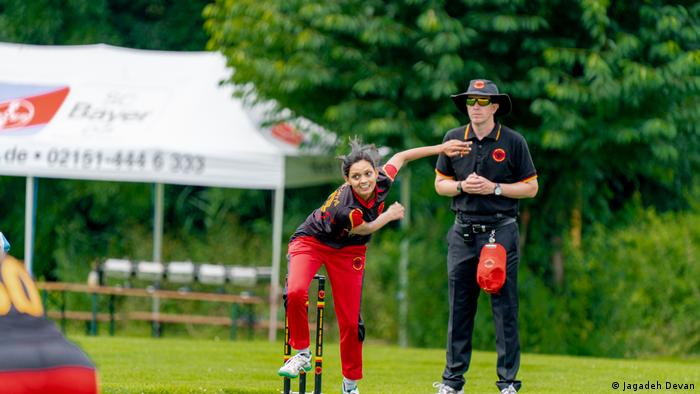 Anuradha Doddaballapur has been captain of Germany's women's team since 2017

Women's game on the rise

Cultural clashes are less of an issue for Germany's women's cricket team, ranked 25th in the world in T20 and made up predominantly of native Germans.

Recognizing their pathway to the national team is easier to reach due to the level of play, Germany's women have used the situation to their advantage to create a more inclusive, diverse sport.

Arriving in Germany from India via the UK in 2011, Doddaballapur initially had to play for Frankfurt's men's team because there was no women's team.

Two years later, she was playing for Germany. By 2015, she founded Frankfurt's first women's cricket team, a team she also coaches and who this year were crowned women's Bundesliga champions.

Last year, Doddaballapur made cricket history when, in a T20 international against Austria, she became the first woman to take four wickets in four balls. 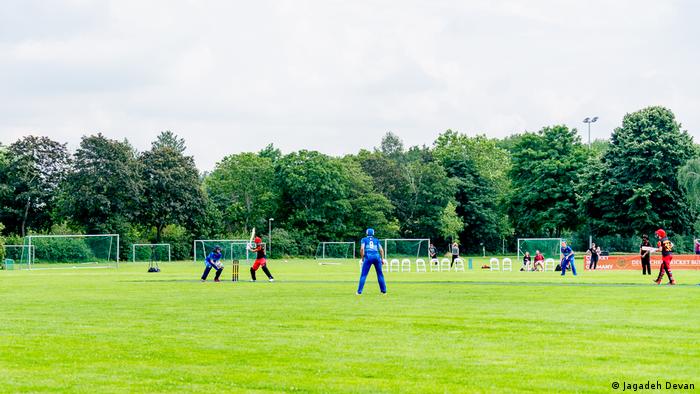 Germany's women in action against France in Krefeld, north of Dusseldorf

"It's an exciting time for women's cricket. You can foresee how this will look in a few years with better funding. The potential is there," Doddaballapur told DW.

Funding has doubled since 2016 to nearly half a million euros, but support outside of the ICC and its extensive criteria is also needed.

Cricket at the 2028 Summer Olympics would be a game changer and would open up greater support from the German Olympic Committee (DOSB).

Germany's federal program "Integration through Sports," run through the DOSB, has long been boosted by the large number of immigrants and refugees playing cricket.

In 2002, Satyanarayana Srinivas left India, where he had played professionally, for Duisburg, a city in western Germany where he intended to study. He thought the cricket chapter of his life was over, but a day after he arrived, he was shocked when he stumbled across a group of young Punjabi guys playing cricket in a parking lot. 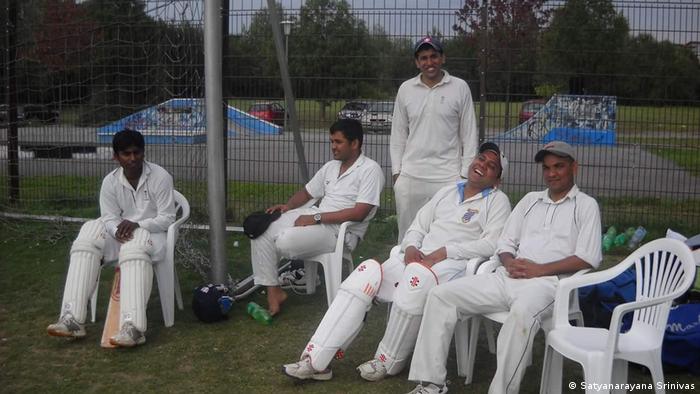 "I thought I'd be the only brown guy on the streets and people would see me as an alien," Srinivas told DW. Cricket helped change that as Srinivas went on to keep wicket for Germany. He still plays for Köln CC now.

Höck, though, believes the DOSB slogan is misleading.

"I would say, the DOSB may be unaware that their working slogan 'Integration through Sport' is a violent statement," Höck told DW.

"Firstly, it articulates an expectation toward an 'abstract other' which actually doesn't exist, and secondly, it doesn't include the far more pressing issue of Germans integrating themselves into global societies."

Despite commitment from a passionate association to integrate the sport into wider society, German cricket faces the same struggles of so many marginalized sports.

Cricket is still often depicted as an exotic British pastime. There's a heavy reliance on volunteers, club facilities often render ground strokes immaterial and there's a lack of visibility, although the ECN is helping to change that. The game is still caught between an amateur reality and professional desires.

"There are a lot of good players but they can't come because they're working on daily wages and can't take lots of days off," said Rohit Singh. "They have families to feed at home." 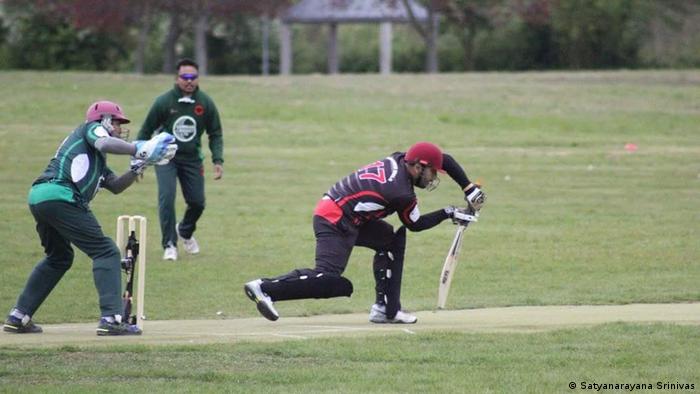 Proper club cricket facilities are still a problem in Germany

'Taking on the world'

"It sounds like we're trying to take on the world," said Mantle, of the German Cricket Association. "We're growing so fast but we're still one of the smallest sports in the country. We're trying to make cricket a German sport and create long-term structures."

While integrating the sport into schools is slow, German cricket is growing strong enough that most of the players selected for the ECC had never played for the country before. Some were also born in Germany, such as 22-year-old Mahela Daub.

"I grew up here and have a special connection with Germany," Daub, born in Göttingen, told DW. "It's good to be a part of it and represent the country."

But when Germany play their World Cup qualifiers in two weeks, the squad will look different. For some, this is an issue.

Srinivas, the former Germany wicket keeper, would prefer to see more domestic-based players get called up rather than someone of better ability who happens to have a German passport — to play for Germany you need to either have been born in the country, have a German passport or have lived in the country for three years and can prove it is your home.

On the other hand, Singh believes the presence of professionals can only be good for the sport and its infrastructure.

Cricket in Germany has been at the crease for a long time. Now, after 30 years, critical contributions from so many and with milestones looming, the hardest and most defining part of Germany's innings approaches.