Europe's finance ministers have agreed to move towards unprecedented sanctions against Spain and Portugal for overshooting EU deficit limits. Both countries then immediately set out to convince the EU to reconsider. 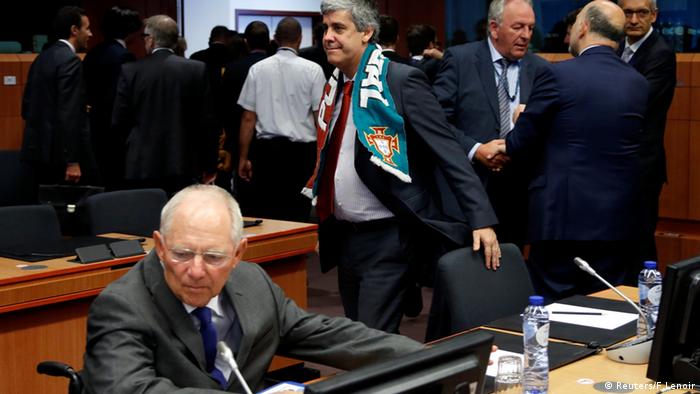 In fining the two countries, the EU hopes to signal that its rules cannot be broken with impunity, which has so far been the case. Among other countries that violated the deficit limit this year and before, the EU has picked on Spain and Portugal for "not taking effective action" to fix the issue.

Wolfgang Schäuble, finance minister of fiscally rigid Germany, which has long pushed for penalties, praised the move. "The decision proves that the rules are being applied," he said Tuesday. "That sends a signal of reliability."

While conceding that "the rules are the rules," Michel Sapin, finance minister of France, whose deficit also hangs above three percent, warned against wanting to "sanction for the pleasure of sanctioning."

The penalties can be as high as 0.2 percent of GDP - which amounts to $2.4 billion (2.2 billion euros) for Spain and $398 million (360 million euros) for Portugal - as well as a loss of those countries' access to eurozone funds.

Both Spain and Portugal railed against the decision. Spain's acting Economy Minister Luis de Guindos said "it would be a huge paradox" for Europe to fine its fastest growing economy, adding that he doubted it would actually go through with it.

Portugal's Prime Minister Antonio Costa struck a similar note, calling the process "a contradiction" that was "unjustified and counterproductive." He warned that "the European economy and the eurozone will derive no benefit from applying sanctions of any kind."

But both governments said that they would do what was necessary to avoid the fines. According to the penalty procedure, they will be given 10 days to state their case.

Spain wasted no time in putting forth a plan. During a press conference on Tuesday, de Guindos said that the government - though at a political standstill - would raise taxes on businesses and crack down more on tax evasion, efforts that he calculated will bring in additional seven billion euros of revenue.

Costa meanwhile maintained that Portugal is already on its way towards abiding by the three percent limit.

Hoping for 'a smart result'

The European Commission will have an additional 10 days to weigh their appeals and put forth a penalty recommendation. EU governments would then have another 10 days to approve it.

Given political backlash to austerity and uncertain economic growth throughout Europe, many expect the fine to bear only symbolic value. The European Commission said last week that zero percent fines were a possibility.

But there have been calls, including from the influential German Finance Minister Schäuble, to cut off Portugal and Spain from structural aid in 2017. European Commission Vice President Valdis Dombrovskis noted that Portugal and Spain will have time until then to "react and avoid losing any EU funds."

"I am sure we will have a smart, intelligent result at the end," said Slovak Finance Minister Peter Kazimir.