Cracks in opposition alliance against Yanukovych | Europe | News and current affairs from around the continent | DW | 31.01.2014

Cracks in opposition alliance against Yanukovych

The protests against the Ukrainian President Viktor Yanukovych force the opposition to work together, but the alliance is fragile. Politicians like Vitali Klitschko have hardly any influence on autonomous groups. 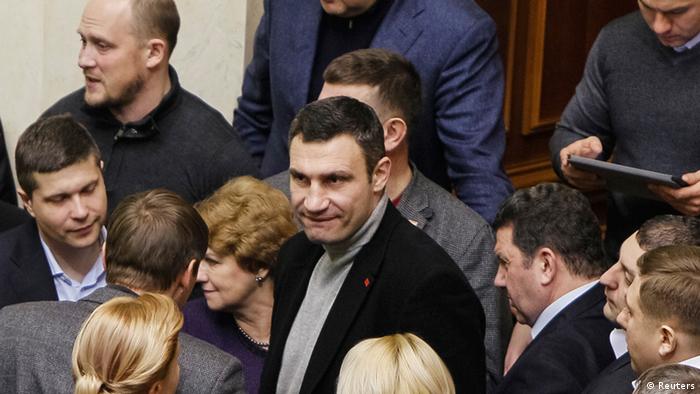 Alexander Moisseyenko purses his lips when he hears the name "Vitali Klitschko." The 35-year-old IT-specialist from Odessa said he doesn't think highly of the opposition leader from the UDAR party.

"Klitschko has nothing to say," said Moisseyenko, who serves as the speaker of the "Spilna Sprava," or common cause, movement. He added that the same applies to other politicians, "The opposition has proved its ability to act."

Moisseyenko sits in an army tent on the Khreshchatyk Boulevard, which the demonstrators from the opposition have occupied since December. Piles of clothes are inside the tent: sweaters, coats and trousers. You can't wear too many layers when the temperatures are below -20 Celsius (-4 Fahrenheit).

Dispute about the occupied ministries

Spilna Sprava was a driving force at the beginning of the protests. "We have registered the very first demonstrations when President Yanukovych announced that he won't sign the association agreement with the EU," said Moisseyenko.

Several hundred people in Kyiv are part of the movement. "We are also in the Hrushevskyi Street," he said without giving further details. In Hrushevskyi Street, demonstrators faced police and some people were killed during street battles. 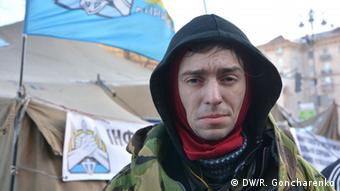 Alexander Moisseyenko is the speaker of the 'Spilna Sprava' movement

Spilna Sprava recently raised attention by occupying government ministry buildings. UDAR leader Klitschko has tried, unsuccessfully, to prevent this as he didn't want to provoke the government. The activists retreated just a few days ago. The right-wing Svoboda, or freedom, party has driven Spilna Sprava out of the Ministry of Agriculture, showing how the opposition groups share a common goal but do not always agree on how to reach it.

The three opposition parties in the parliament are just a part of the protest movement. There are about a dozen small opposition groups, some which were formed during the protests.

You have to go to the "Headquarters of the National Resistance" in the union building at Maidan to meet the right-wing activists. On a glass door in the forth floor are "Nazi only" stickers. Young people with covered faces walk through the door. They have clean-shaven heads and wear combat boots and military uniforms. The extreme right-wing activists from "Pravy Sektor" (Right Sector) put themselves up here.

"We are not an organization or a party, we're an association of several groups," said Andrij Tarassenko, a bearded man in his early forties. Pravy Sektor came into being after the protests started and is based on the right-wing organization 'Trisub' (trident). Tarassenko is the deputy chairman of Trisub and disagrees with it being given the label "extremist, right-wing."

"We're nationalists and not chauvinists or fascists," he said, adding that Pravy Sektor is not a purely western Ukrainian association and that half of its members speak Russian. 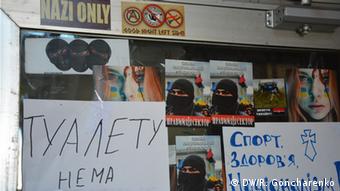 Pravy Sektor is apparently at the fore of the violent protests against the police. They are easily recognized by their red and black flags. Tarassenko doesn't deny that his people threw Molotov cocktails and stones at the police. There are a few hundred activists in action, according to Tarassenko. This number could not be independently verified.

Alliance of purpose against Yanukovych

Pravy Sektor is not fighting for Ukraine to develop closer relations to the EU but to "remove the occupying regime." For them, the occupying regime is Yanukovych and his pro-Russian policy. Tarassenko said he does not exclude cooperation with other opposition parties but he and his supporters won't stop fighting before the president has resigned.

It seems to be difficult for the political opposition to bring autonomous groups like Pravy Sektor and Spilna Sprava completely onto its side as not even the three main opposition leaders are united.

According to polls Klitschko is the most popular opposition leader and he would like to run for president in the 2015 election as the common candidate of the opposition, but Arseniy Yatsenyuk from Batkivshchyna (Fatherland) party and Oleh Tyahnybok from Svoboda also want to run for presidency.

When Yanukovych recently offered his opponents the chance to form part of the government, cracks in the opposition came to light. Yatsenyuk indicated that he is ready to take on a role in the government. He received loud whistles from the crowd on Maidan Square and later he had to backpedal and rejected the offer.

The majority is neither right-wing nor political 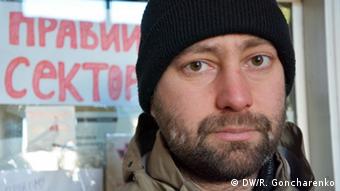 But it is wrong to assume that the opposition in Kyiv is dominated by the right-wing activists. They are not more than a few thousand in total. There are other, less extreme groups. For example, the activists from the "Democratic Alliance," who fight against corruption and for closer ties to Europe.

Most of the hundreds of thousands of protesters against Yanukovych in the streets of Kyiv are not following a party's political agenda. Many of them are from the middle class. People like Vassyl who is from western Ukraine and in his late 40s. He said Klitschko is pleasant but he still wants to decide for himself what to do. "I'll stay here until there are elections," he said.

Or students like Maria and Sophia from Kyiv on Maidan Square. "We came here to support the people here," they said. When the right-wing activists shout their slogan "Glory for Ukraine" Maria and Sophia answer with "Glory for the heroes!" They say they don't care that slogan is from Ukrainian nationalists because it's been turned into a chant commemorating today's "heroes of Maidan Square."

The head of Human Rights Watch tells DW that the Olympics may mean an end to the Russian UN veto over Syria. And how a free Ukraine could inspire a similar rising in Russia - Vladimir Putin's 'nightmare.'

The EU-Russia summit revealed the emptiness at the core of the two political zones' "strategic partnership." The EU needs a new strategy in order to prevent a new Cold War with Russia, writes DW's Ingo Mannteufel. (29.01.2014)

Ukrainian protesters may be risking their lives, as cases mount in which activists are kidnapped and beaten. One of them was found dead, and others have gone missing. Some experts suspect death squads behind the crimes. (27.01.2014)