COVID: What has India learned from the second wave?

Experts fear that, amid a slow vaccination drive and easing restrictions, the appearance of new variants could spur a devastating third wave. The country is still struggling with a severe shortage in medical supplies. 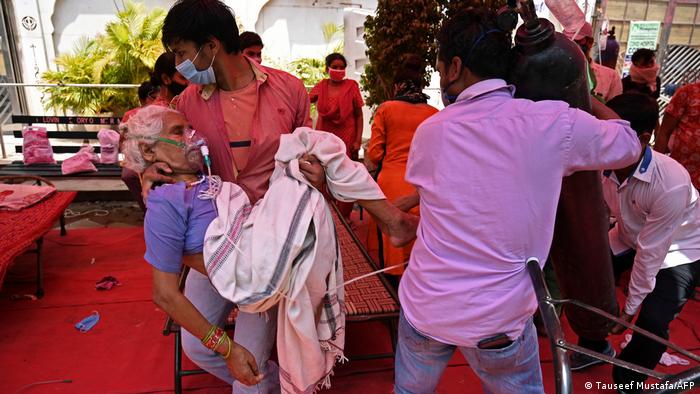 India was recording over 400,000 new cases per day at the height of the second wave

Despite a decrease in the number of new COVID-19 cases and the easing of restrictions in India, experts are warning that the country still has a long way to go to effectively prevent the spread of the coronavirus.

In response to the devastation seen in April and May, many states have started expanding their health infrastructure to ensure availability of essential equipment, drugs and ICU beds.

At the height of the second wave in April and early May, the daily number of new cases often exceeded 400,000. On Wednesday, however, India reported just 62,200 new cases, marking a sharp decrease from May's figures.

Still, as the country's vaccination drive slowly gathers pace, leaving more room for variants to develop and spread, many are warning that a third wave could be around the corner.

India has been grappling with an acute shortage of lifesaving oxygen and medicine, as patients have been denied beds, and many have died outside of hospitals because of lack of treatment.

In an online briefing, Delhi Chief Minister Arvind Kejriwal announced the setup of a pediatric task force and two genome sequencing labs, as well as a plan to ramp up oxygen capacity in the state. The region has been one of the hardest hit by the second wave.

Given that children will be more vulnerable to a potential third wave, the western state of Maharashtra plans to increase the number of pediatric COVID-19 beds to nearly 2,300, up from the current number of 600.

The financial capital, Mumbai, which won praise for its management of the second wave, is already procuring ventilators, monitors and other medical equipment.

"We are fully geared up. We have four COVID care centers with pediatric units, which will be able to house more than a thousand children," Mumbai Municipal Commissioner Iqbal Singh Chahal told DW.

Similarly, the eastern state of Jharkhand has unveiled a plan that includes setting up 20 pediatric ICU beds in every district and converting all malnutrition treatment centers to high-dependency units, which provide a more intensive level of care than in normal wards. The plan also identifies gaps in essential resources, and drug requirements among pediatric age groups.

"I think we are better prepared to handle the third wave. There might be bottlenecks, but hospitals and government authorities have taken preemptive steps," Priscilla Rupali, an infectious disease specialist from Christian Medical College, told DW.

Virologists and scientists believe that the key to thwarting a third wave is vaccinating the vulnerable, along with reliable data on genome sequencing of the virus variants in circulation.

"Slow vaccination progress is a problem. That will encourage the development of more variants, and also the third wave may hit us earlier than the rest of the developed world because there will still be a large number of susceptible individuals," Vineeta Bal, a scientist from the National Institute of Immunology, told DW.

"It is not just the children who will be susceptible in the next wave because they will not get a vaccine, but also people from other age groups and pregnant women," Bal said.

Although India has set an ambitious target of manufacturing more than 2 billion COVID-19 doses of vaccines by December, which would be enough to inoculate most of the population, the vaccination drive has been criticized for moving at a slow pace.

Official data shows that only 11% of the population has received at least one dose while just 3.4% of people have completed the required two doses.

"In order to vaccinate the whole population, both supply and trained staff are necessary," Bal said.

COVID-19 Special: A 'variant of concern'

The second wave in India was also propelled by a highly infectious variant, now commonly known as the delta variant. A strain of the delta variant is now classified as "of concern" by the World Health Organization, and according to the UK's Imperial College COVID-19 response team, it could also contribute to a significant third wave.

"The second wave overwhelmed the system. We need to vaccinate at least 9 to 10 million people everyday and aggressively contain the virus," Giridhar Babu, an epidemiologist, told DW.

Additionally, a slow pace of vaccination allows new variants to develop and spread.

"The second wave taught us valuable lessons, and I think we are better in terms of oxygen supply in district hospitals and community health centers. I don't think there is cause for panic," Shally Awathi, a pediatric pulmonologist from King George's Medical University in Lucknow, told DW.

A group of German MPs is in Taiwan to strengthen co-operation. But to what extent, given Germany's massive trade ties with China? And how caring for the elderly is fast becoming a business in family-oriented India.