COVID plus Brexit means quarantine, paperwork and stress  | Germany| News and in-depth reporting from Berlin and beyond | DW | 19.01.2021 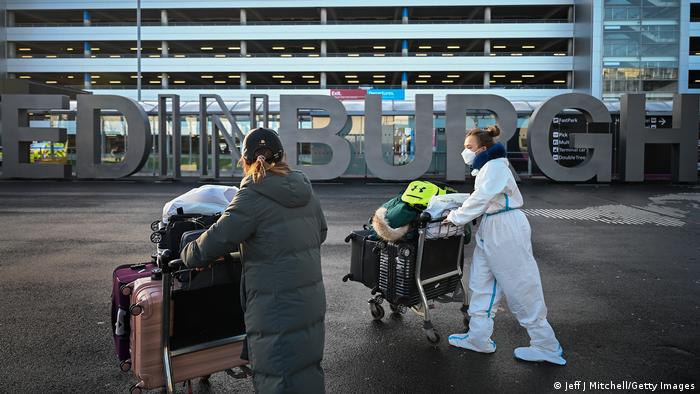 While rare, some travelers have braved the Edinburgh airport in recent days

In the first days of a post-Brexit new year, I found myself shivering in a snowstorm at Edinburgh airport, masked and sanitized to the hilt, clutching a thick wad of documents to prove my residency in Germany along with proof of a negative COVID-19 test result.

I was bound for the city where I live: Berlin.

As a UK citizen who has lived in Germany for 18 months, I had expected to stay put in Berlin over Christmas 2020 until travel became safer and easier. But a death in my family forced me to return to Scotland. 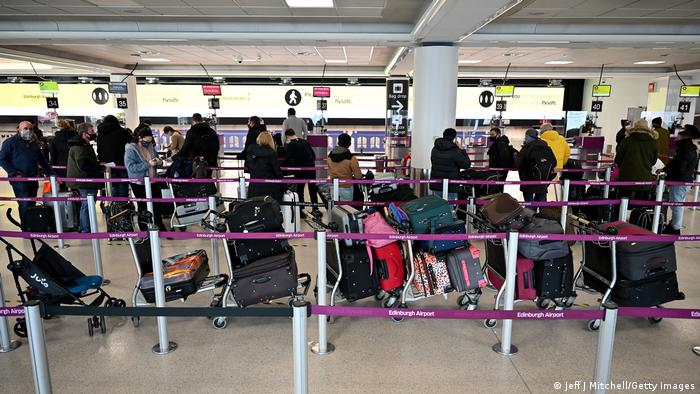 Social distancing can be difficult at a busy airport

On the day I traveled to Edinburgh, cases were rising across Europe. The UK reported 24,054 new COVID-19 cases; Germany reported 23,542. I was required to quarantine at home for 14 days upon arrival in Scotland.

But there was no quarantine requirement for other members of my household. My father, with whom I was sharing a house, was free to legally go to shops, restaurants, pubs and travel on public transport to his heart's content during my 14 days of confinement. At that time, much of Scotland was not in lockdown.

The Scottish government also made an exception to the quarantine rules to attend funerals. Under the circumstances, I was very grateful for this — but surely this rendered the quarantine requirement meaningless.

In fact, the only time I was contacted to check on my 14 days of quarantine came during the wake. I had a missed phone call, one that I returned a few hours later. A pleasant Glaswegian voice ran through a few questions and then focused on checking up on my mental health. She left me with the phone number of an emotional support charity "in case I got too lonely."

I planned to travel back to Berlin well before the new year. The end of the Brexit transition period on December 31 meant that UK citizens could potentially be shut off from entering the European Union under coronavirus travel restrictions after that.

Then came the weekend before Christmas when, in wartime spirit, I gathered around the television with my family to watch Prime Minister Boris Johnson and, later, Scottish First Minister Nicola Sturgeon address the nation. The new mutation of the virus was out of control in the south of England; Christmas family gatherings would be largely banned, and the border between Scotland and England was to be closed for the first time in 70 years. I can honestly say during the whole duration of the pandemic I have never felt so hopeless as on that day.

In an effort to react quickly to the new variant, much of the world closed its borders to the UK with immediate effect — just days before the UK would in turn close its doors to the EU.

Stranded in England due to COVID mutation

In the ensuing chaos, airports were stuffed full of people trying to get back to their families. Truckers at ferry terminals in England found themselves spending Christmas Day alone in their cab, and food and supplies were left to rot. And — of course — my flight back to Berlin was canceled.

Resigned to the impossibility of the situation, I expected to ride out the rest of the winter in Scotland with my family. But a loophole emerged: German citizens and German residents would be allowed to travel back home from January 1. My flight was rescheduled for early January.

After internal (and external) conflict, I decided to take the plunge and try to get back to Germany.

My trip would not be straightforward. UK citizens living and working in Germany before Brexit have their rights protected under the EU withdrawal agreement. But in order to demonstrate this right, we need a new residency card — a card that anecdotal evidence suggested has still to be issued to the vast majority of relatively recent arrivals, like me. So I needed to prove my residency in Germany with every possible piece of paperwork. Fortunately, life in Germany tends to produce a great deal of that.

The second problem was that in order to travel from the UK I needed to take a privately-paid coronavirus test within 48 hours of my trip. But most private testing companies would not guarantee that a PCR test result could be returned within 48 hours. After calls to the test center, my airline, and — for good measure — the German Embassy in the UK, I established there was no solution to this particular Catch-22. I would have to cross my fingers. 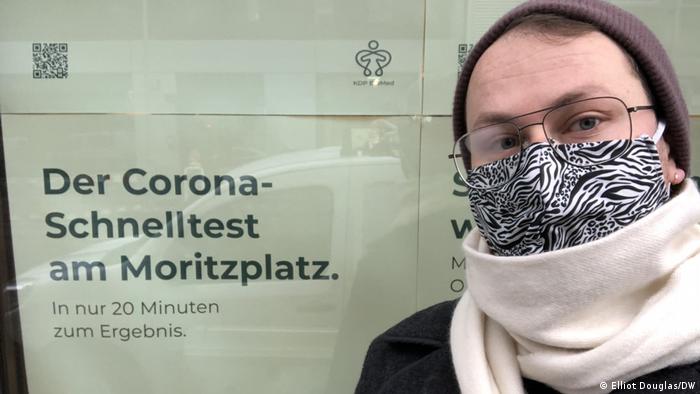 Upon his return, Elliot got a 'quick test' in Berlin

Luckily, my test result came back in time (negative) and I made it to the airport. Some people were turned back at check-in; even more at the gate. I have rarely been on a plane that was emptier or the atmosphere more tense. When we landed in Berlin, in another snowstorm, the plane doors were briefly frozen shut. A strained 30 minutes passed until the crackly voice of the pilot announced that we could disembark.

At customs, I queued up in the non-EU line for the first time, which moved at a snail's pace. An unsmiling German border official checked my documents and my negative test result — and, for the first time ever when entering the European Union, my passport was stamped.

Quarantine rules at the German end were a little different to Scotland. Instead of 14 days, only 10 days were required, and in Berlin and some other states, this can be limited to five days with a negative test result on day five.

While I had to register where I would be quarantined, unlike in Scotland no one made any attempt to contact me. Again, my flatmate was free to leave the house and shop for me. On the fifth day I tried to call my local health officials, who were allegedly tracking my quarantine. No reply. I then called the Berlin-wide citizens' advice hotline.

"Oh, Friedrichshain-Kreuzberg?" the woman on the other end said, sighing, naming my district. "They're the most useless, they never seem to check."

This was not encouraging. Unperturbed, I left the house for the first time after five days to free myself from quarantine. At the testing center, I opted for the antigen test — a type of test that provides much quicker results but some experts say is less accurate than a PCR test. Different German states require different types of tests, with rules constantly changing.

What we learn from China's pandemic response?

And then, within minutes, I received my negative test result. I celebrated with a trip to the supermarket. Had I gone a couple of hours earlier, I would have been breaking the law. But I reflected that my chances of being caught would have been extremely low and that many other people had probably also worked that out.

I was very fortunate, at both ends. I had people to shop for me and was able to work from home. Many are not, and may well end up breaking quarantine in order to provide for themselves or their families.

Last week, the UK announced it was finally exploring the option of compulsory minimum 14-day hotel quarantine for incoming travelers. The scheme, which has its downsides, has become the norm in Australia, New Zealand, China and several other countries — but it brings the chances of infection from incoming travelers to almost zero.

Efficiently screening and quarantining travelers may not end the pandemic. But, from my experience, the quarantine procedure is an area that badly needs to be reexamined in the UK and Germany.

With the United Kingdom currently cut off from Europe, British Prime Minister Boris Johnson held crisis talks over a new strain of COVID-19. EU officials are working on ways to reopen the UK to passenger traffic.