COVID: South Korean cities grapple with cab shortage | Asia | An in-depth look at news from across the continent | DW | 29.11.2021

After lockdowns knocked several taxis out of business, partygoers and late-night workers are struggling to catch cab rides home. 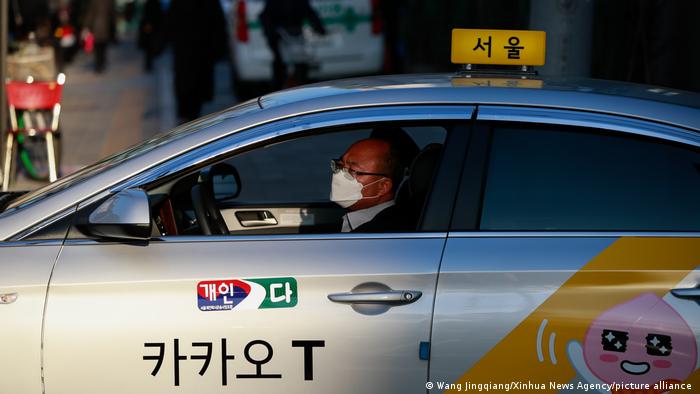 Experts believe the shortage will remain through the holiday season

Han Ye-jung could always count on an available taxi to bring her home, after working late into the night at her company's office in central Seoul. However, that has changed since the start of the pandemic.

At present, flagging down a taxi requires good luck or a test of endurance, Han told DW. A shortage of cabs in South Korea's major cities, she said, is certain to become more acute over the coming festive season.

"It's unbelievable at the moment," said the 39-year-old. "Taxis just seemed to disappear from the streets of Seoul during the pandemic, and now that the government has begun to relax the restrictions on going out, it's impossible to find one."

"A lot of districts in Seoul are really busy again now and the restaurants and bars in Itaewon and Gangnam are full of people who want to go out after we have all been locked down for such a long time," she said. "But people are having to be careful to make sure they are able to catch the last train home each evening because they will never be able to find a taxi after midnight."

"People are looking forward to being able to celebrate with friends and colleagues in late December, something they could not do last year, but everyone knows that finding a cab at the end of the night is going to be pretty much impossible," she said.

Nearly two years after coronavirus infections were first reported in South Korea, the taxi industry has shrunk dramatically. Drivers who had a good income before the health crisis saw customer numbers plummet as staff were instructed to work from home and the government imposed a series of lockdown measures which closed bars, restaurants and other nightlife venues that drivers relied on for fares.

With their incomes in decline, drivers were forced to seek new sources of income. The Korea Times described the process of finding a taxi on the streets of Seoul as a "war," citing metropolitan authorities' figures which show that the number of drivers was down to 70,805 in late August, or 13% less than what it was two years ago.

At the same time, demand for taxis between the hours of 11 p.m. and 4 a.m. surged after restrictions were eased on November 1.

Nationwide, the number of drivers fell by 9.5% as of September. An official from the Korea National Joint Conference of Taxi Associations told the Korea Times that many drivers had hung up their badges during the pandemic because they were not earning enough money.

"The drop in drivers, along with the surge in passengers in line with the 'Living with COVID-19' scheme seems to have resulted in passengers having difficulties being able to use taxis, especially at night," he said.

In response to the shortage, the Seoul government has temporarily relaxed a rule under which drivers are only permitted to work three consecutive days before a mandatory day off. Critics say the move will not completely solve the problem, especially if drivers who left the industry refuse to return.

Will South Korea bring back restrictions as COVID surges?

Proposed solutions include more late-night buses linking city centers with the suburbs, or making it easier for technology-based providers, such as Uber or Grab — which the traditional taxi industry has lobbied fiercely against — to start services.

Taxi firms staged strikes when it was first proposed that new operators be allowed into South Korea. The firms were successful in making sure that the sector was so heavily regulated that it was not appealing to Uber or other similar companies, although that is now changing, partly as a result of the current cab crisis.

Eight years after its first attempt to enter the Korean market, San Francisco-based Uber has begun working with local firm SK Telecom Co to launch its local ride-hailing service, known as UT. The service aims to have 10,000 franchise taxis before the end of the year and expand into carpooling next year, in a measure that would help solve the present shortages.

UT would also help to supplement a comparable service presently being operated by the South Korean firm Kakao.

Park Saing-in, an economist at Seoul National University, believes that the present problems in the industry are temporary. He said that the shortage was caused by the combination of pandemic shutdowns and a sudden lifting of restrictions on bars and restaurants.

"I think it will be just a short-term issue. It will just take a little time for the supply-and-demand situation to work itself out."

However, he said that might not happen before the country's festive season begins. "Since the government lifted the restrictions and moved to 'Living with COVID-19,' infection numbers have increased again," he said.

"The restrictions may have to be brought back if cases continue to rise or if there is greater concern about newly emerging variants of the virus. But if numbers fall again, there will still be a shortage of taxis at the end of the year.

"It's the holiday season. People want to go out. They are tired of being told to stay at home. It's natural," he added.