Germany's health minister has warned that the currently low, but rising COVID caseload could quickly snowball. But the country also expects lower hospitalization rates even as cases rise, due to high vaccination rates. 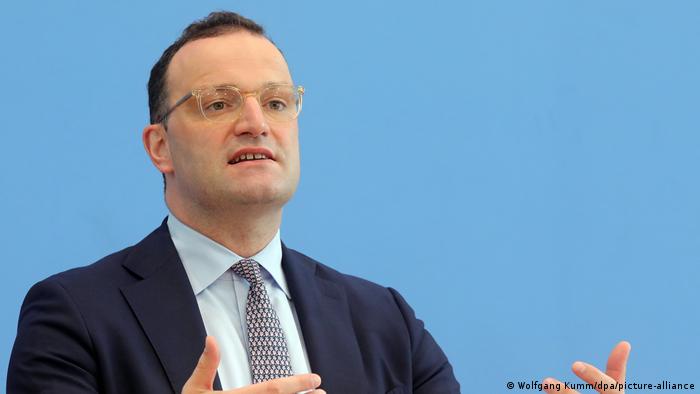 Health Minister Jens Spahn at a press conference in Berlin

German Health Minister Jens Spahn said on Wednesday that COVID-19 infections are now expected to rise, after two months of consistently low case numbers, which have started creeping upwards in the past two weeks.

Spahn spoke at a press conference on Wednesday regarding the incidence rate, the number of infections per 100,000 inhabitants per week, the measure by which German authorities had been assessing the pandemic. The figure has been instrumental for the government in deciding when to impose or remove lockdown measures.

As of Wednesday, the Robert Koch Institute (RKI) for disease control and prevention reported the rate of 11.4 infections per 100,000 inhabitants, with 2,203 new coronavirus infections and 19 deaths recorded within 24 hours.

Spahn warned that, while the number still seemed low, it could quickly get out of hand.

"If the incidence continues to double like this, every 12 days, then we will exceed 400 in September, 800 in October," he said.

"Do we want to let this happen?" Spahn said, saying that "we're deciding now in these days of July what will happen in September, October, November."

"It's about wearing masks indoors, getting tested regularly and if you haven't been vaccinated yet, getting vaccinated," he said.

The German health minister pointed out the importance of being able to open schools and daycare centers in a low-infection environment in the fall.

Earlier this year, the German government had set an incidence of 50 as the magic number to lift restrictions, while anything above that number kept lockdowns in place.

Spahn said on Wednesday that that figure would now be changed. While he expressed worry about rising cases, he noted that with a higher vaccination rate, the number of hospitalizations and intensive care units used would be lower.

It seems that "200 is the new 50," Spahn said, indicating that the country would be able to remain open with a higher number of infections than before, and less subsequent burden on the health system.

Still, he told the public that raising the bar did not mean citizens should lower their guard or allow cases to rise.

'Most vaccinated' in Europe

Spahn also sought to reassure the population that the country was on the right path to manage the pandemic, in particular when it comes to vaccination.

"In no other country in Europe are more people thus vaccinated than in Germany," Spahn wrote on Twitter, ahead of the press conference.

Still, he urged those who had not yet been vaccinated to do so, saying the current rates of vaccination were still not high enough to counter the highly transmissible delta variant, which is fueling a resurgence in the virus across Europe.

More than 50 million people in Germany, some 60% of the population, have received at least one shot of vaccine against the virus and around 47% are fully vaccinated, Spahn said.