Corruption, division among Greek political elite | World | Breaking news and perspectives from around the globe | DW | 13.02.2012

Athens saw a partial success with the passage of its latest austerity package. But commentators say that Greek politicians are incapable of solving the country's problems, leaving voters with few alternatives. 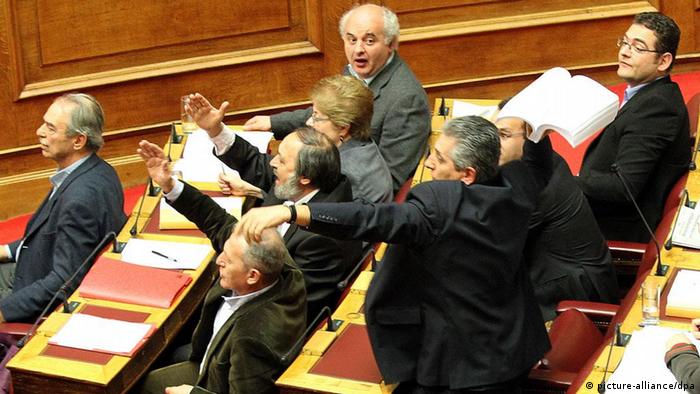 Turbulent days both in and out of parliament have surrounded the Sunday night passage of a new austerity package intended to save Greece from bankruptcy. The vote highlighted divisions and corruption among top Greek politicians, according to political commentators.

Ahead of the vote, some members of the Socialist Party announced they would vote against the austerity package, while others withdrew in protest of the coalition government to which they belong. More than 40 members of the governing coalition voted against the new round of savings measures. After the vote, they were expelled from their parties.

Once the package was passed, conservative party head Antonis Samaras demanded an immediate revote - despite also suggesting that he would still vote for the austerity package in parliament. Then the unpredictable right-wing populist Giorgos Karatzaferis let his ministers resign from a government to which he had so far offered strong support. 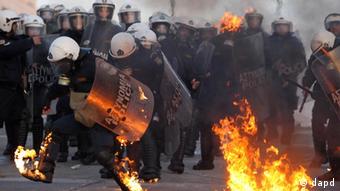 Heavy protests in Athens and elsewhere in Greece accompanied the vote

Greek commentators have suggested that former Prime Minister George Papandreou encouraged protests from the Socialists to punish his biggest political adversary, Evangelos Venizelos, a fellow party member and supporter of the austerity measures.

This political maneuvering among Greek leaders is causing lots of trouble for the country, argued the EU expert Antonis Papagiannidis in an interview on Thursday with Greece's Skai TV.

"For the sake of generating political drama at home, politicians in Athens didn't come to an agreement until Thursday night. By then, though, the major European newspapers had already gone to press," Papagiannidis said, adding, "Venizelos came to Brussels to announce the successful end to negotiations, but his partners already had to assume that no agreement had been reached."

Other political commentators have agreed that the politicians' haphazard course is a major obstacle to recovery.

"Even as the country is in free-fall, the personal interests of our politicians stand in the foreground," read one piece in "Naftemporiki," an Athens business journal. 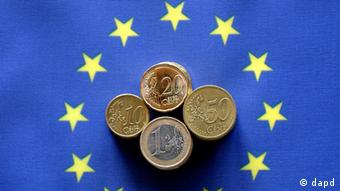 Some Greek politicians argue EU institutions are destroying the country

But for many, the new scapegoat is the troika consisting of the EU, IMF and ECB that is alleged to have forced Greece to save itself to death.

Those three institutions have indeed admitted mistakes in their handling of the Greek crisis, but the government in Athens has insisted on higher taxes out of fear of the alternative - namely, taking a swipe at a political system based on corruption and special interests by reducing state spending and eliminating privileges.

"That will lead to suffering both for the citizens and for the many public servants who take their service seriously," the pro-business lobbyist added. 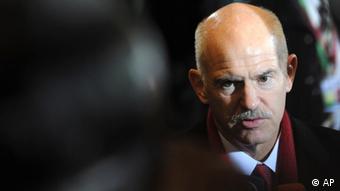 Despite the crisis, those close to the political class continue to get cushy posts. The most recent example: Kostas Theos, until recently the office manager for former Prime Minister George Papandreou, was named deputy head of the state-owned electricity company DEI, although the position was not open. The company's former vice president was forced to resign to make room - a move almost unthinkable if the energy company functioned like a private company.

Many Greek commentators have concluded that Athenian politicians simply won't give up their system of playing favorites because they would destroy their own careers along the way.

At this critical point, it is especially important to rally behind Greeks who support reforms and honest work, said renowned political analyst Alexis Papachelas.

"The lazy and incompetent political system must not be confused with the hard-working Greek population. That's also something our partners abroad need to be aware of. They should not cling to prejudices about lazy Greeks and span the bow too tightly, ushering in the ruin of an entire people," Papachelas argued, cautioning that such a move would have consequences for the EU.

Is there an alternative to the veteran politicians produced by the corrupt old system?

Polls indicate the leftist opposition parties could draw in around 40 percent of votes in elections slated to come by April. If so, they would win an absolute majority in the Greek parliament and set about dismantling the austerity measures so far set in place, a move that could further destabilize Greece and the entire EU.

Still a long way to go for Greece

As Greece prepares to accept new austerity measures, questions have arisen about the ECB's methods. A controversial bond swap is intended to cut Greek debt, but could be a subsidy in disguise. (13.02.2012)

Threats are made, deadlines are set. There are arguments behind closed doors as the eurozone and Greece wrestle over money - lots of money. (11.02.2012)