Coronavirus vaccine: Why are so many Russians skeptical of the COVID shot? | Europe | News and current affairs from around the continent | DW | 28.10.2021

Coronavirus vaccine: Why are so many Russians skeptical of the COVID shot?

A new lockdown has come into effect in and around Moscow. Only a third of the Russian population is fully vaccinated — experts blame a widespread distrust of the authorities. Why do so many Russians remain skeptical? 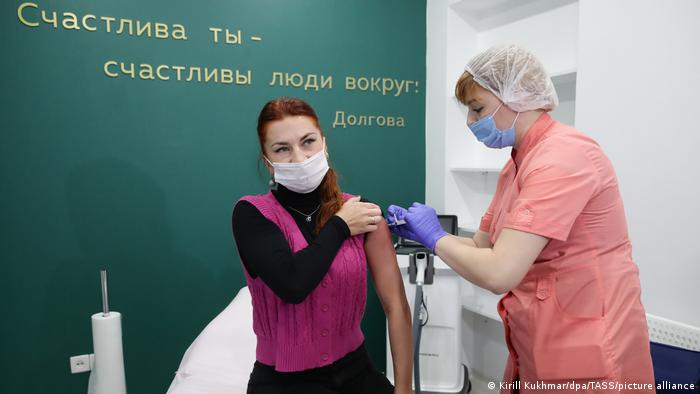 Once again, schools, stores, restaurants, sports centers and hair salons in Moscow and the region around the Russian capital have been forced to close. Drugstores and shops that sell food are allowed to remain open, along with theaters and museums, but visitors must show a QR code to prove they've been vaccinated or are fully recovered from a COVID infection.

Moscow Mayor Sergei Sobyanin announced the new measures last week, ordering all companies to furlough nonessential staff until November 7. On his website, Sobyanin warned of a "historic peak in new COVID infections" and urged his fellow Muscovites to "take a short break and help save the health and lives of many people," assuring them that life would get back to normal afterward.

The new measures coincide with a decree by President Vladimir Putin ordering a nationwide paid week off work in the first week of November, along with smaller-scale lockdown efforts introduced by regional leaders.

The moves come as Russia, which has seen a low vaccination rate, is experiencing new highs in COVID-19 cases and deaths, due in large part to the new, more infectious delta strain. On October 27, authorities registered 36,600 new cases of COVID-19, more than ever. More than 1,000 people are dying every day.

"The situation in Moscow is very serious. We can't talk about waves in Moscow. Since summer we've plateaued at a very high level of new infections," said Dr. Alexey Agranovsky, professor in the Virology Department at Lomonosov Moscow State University.

"Now we're starting from that high level and going up. It's a very concerning and unfortunate situation."

Agranovsky told DW that the new restrictions were the right step, but he said it might not be enough. Most experts recommend a minimum lockdown of two weeks due to the COVID incubation period.

"Eleven days isn't enough at all. It's another example of a half measure, and an attempt to please everyone," he said. "But you have to keep public health in mind. ... We're talking about real deaths, real illness and long COVID. We have to put a stop to it."

He warned that Mayor Sobyanin may be forced to extend the measures, should the rate of infection remain high.

Only a third of population vaccinated

Russia's current struggles are surprising, given the country's first-in-the-world mass vaccination drive. But in the 10 months since the Russian-made Sputnik V was brought to market, Moscow is still struggling to get shots in arms.

Only around 36% of Russians have had at least one dose of a domestic vaccine, one of the lowest rates in Europe. This is low compared to other industrialized countries. In Germany, the vaccination rate is almost twice as high.

Opinion surveys indicate that only slightly more than half of Russians intend to get vaccinated. However, a large minority say they don't intend to get vaccinated at all. Some authorities have suggested compulsory vaccination to turn the tide, but Russians are divided on this issue. According to a recent survey by the Public Opinion Foundation (FOM), 47% of those surveyed were in favor of a mandatory vaccine, while the same proportion was against it.

How good is Sputnik V?

Part of the problem is Russia's homegrown vaccine; many of those surveyed who had yet to be vaccinated said they'd rather wait for an international version. Andrey Milekhin, vice president of survey institute Gallop International and director of Russia's Romir research institute, said the international community's reluctance to embrace Sputnik V is also weighing on vaccination rates.

"What's happening with the registration of our vaccine? I also don't understand it," he told DW. "Why don't all international medical bodies accept the vaccine? Questions like that erode public trust."

That skepticism isn't limited to the general public, either — many in the medical community have been reluctant as well. "That's the most surprising fact among all the tendencies we're observing," said Agranovsky. "Among doctors, there aren't just a lot of vaccine skeptics, but also people who raise doubts about COVID more generally."

Agranovsky recalled being told by the nurse administering his inoculation that he was "a brave man" for agreeing to be vaccinated. "And it's not just hospital and clinical staff," he said. "There are also people with medical degrees who hold roundtables and discussion forums and they're attracting many people who are affected by their arguments."

The Levada Center, a nongovernmental polling organization, found that the population distrusts both the vaccine and the authorities in general. Denis Volkov, the center's director, told DW that there was a widespread lack of confidence in the country's power structures, with about 50% of Russians disapproving of the government's work. 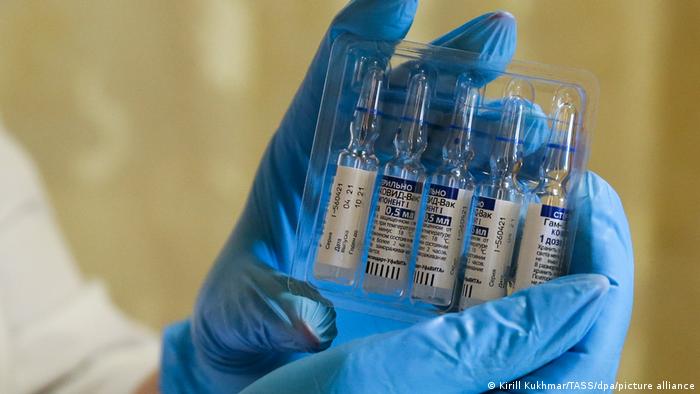 Many Russians distrust both the vaccine and the authorities

"The number of those willing to be vaccinated is much lower among those who have a negative attitude toward the authorities," he said, adding that those who distrust the authorities tend to oppose almost all government initiatives, from vaccination campaigns to digital voting to video surveillance. But he also said most of those who were afraid of the vaccine were also worried about contracting COVID-19.

Currently, only about half of the Russian population supports the authorities' efforts to fight the coronavirus pandemic, according to the Romir research institute. "Right now, we're seeing a polarization in public opinion," said director Milekhin. He said this was why there were so many online debates about this issue, and why so many people were deliberately spreading misinformation.

He fears that while the latest lockdown might be the right measure from an epidemiological standpoint, the protracted anti-COVID campaign combined with expanded restrictions is only making many Russians more resistant to the government's pleas to get vaccinated.

"People stop listening. They develop mental blocks. And the thick skin many people develop comes from the fact that all these arguments, the frightening images, just stop having an effect," he said. 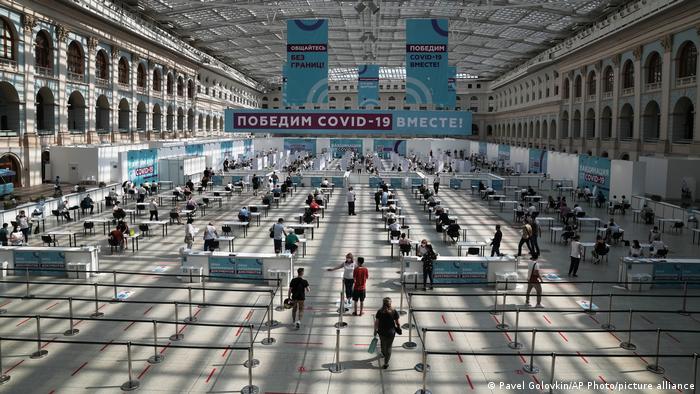 According to data collected by the independent website gogov.ru, which tracks vaccinations in Russia, the daily vaccination rate is once again approaching the peak values recorded during the summer, after a similar two-week period with stricter COVID measures. Since mid-October, over 500,000 people have been receiving a shot every day.

Volkov of the Levada Center said the announcement of the new lockdown and the increasing restrictions on unvaccinated people in different regions of Russia had already had an impact on the population's anti-vaccine stance.

"Our studies have shown that a significant proportion of those who do not want to be vaccinated wait for the moment when they can no longer avoid it," he said. "However, suitable measures only work if they are consistent and long lasting, which is not the case here."

Volkov is certain it was the long and hard lockdown in various European countries that contributed to Europeans getting vaccinated in greater numbers than in Russia.

This article has been adapted from the original Russian. Additional reporting by Aaron Tilton.