Margaret Keenan, 90, is the world's first person to receive the BioNTech-Pfizer vaccine outside of a trial. The UK has 800,000 doses of the jab and expects to have up to 4 million available by the end of December. 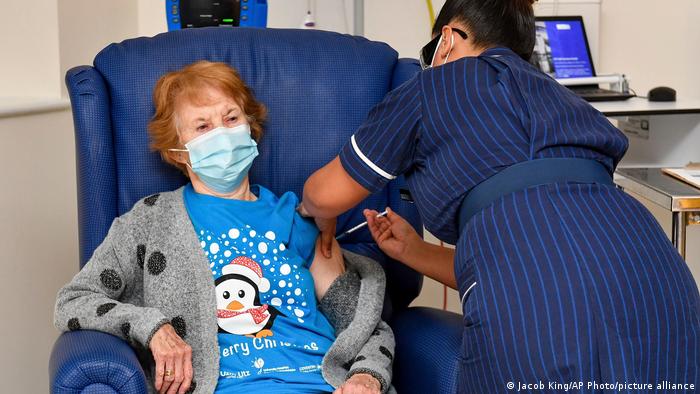 Britain on Tuesday began rolling out the first doses of a widely tested and independently reviewed COVID-19 vaccine, kicking off the biggest vaccination program in the country's history.

People over 80, care home workers, and at-risk frontline health and social care staff were the first in line to receive the jabs, a day that has been dubbed "V-Day." They will require a second dose in 21 days.

UK gets ready for 'V-Day'

The first recipient was grandmother Margaret Keenan, who turns 91 next week. She received the vaccine at University Hospital Coventry at 6:31 a.m. UTC, and said she feels "so privileged to be the first person vaccinated against COVID-19."

"It's the best early birthday present I could wish for because it means I can finally look forward to spending time with my family and friends in the New Year after being on my own for most of the year," she said.

Meanwhile, Buckingham Palace refused to comment on reports that Queen Elizabeth II, 94, and her 99-year-old husband, Prince Philip, would be vaccinated as a public example of its safety.

"Our goal is totally to protect every member of the population, Her Majesty, of course, as well,'' Dr. June Raine, chief executive of Britain's Medicines and Healthcare products Regulatory Agency, told the BBC.

Most to be vaccinated next year

Public health officials are asking the public to be patient because only those who are most at risk from the virus will be vaccinated in the early stages. Most people will have to wait until next year to be vaccinated, until there is enough supply to expand the program.

"I think there's every chance that we will look back on ... [Tuesday] as marking a decisive turning point in the battle against coronavirus,'' said Simon Stevens, the CEO of England's National Health Service.

The first 800,000 doses will go to people over 80 who are either hospitalized or already have outpatient appointments scheduled, and nursing home workers.

Last week, Britain became the first country to approve the BioNtech-Pfizer vaccine, raising hopes of a breakthrough in the pandemic, which has killed more than 1.5 million people.

The UK has been one of the countries hardest-hit by the pandemic, both in Europe and worldwide, recording over 61,000 deaths and 1.6 million cases. The country has ordered 40 million doses of the vaccine — enough to innocculate 20 million people. Up to 4 million of those doses are expected by the end of December.

The government is targeting more than 25 million people, or about 40% of the population, in the first phase of its vaccination program.

Prime Minister Boris Johnson, who spent days in intensive care with COVID-19 earlier this year, called it a "huge step forward in the UK's fight against coronavirus."

UK Health Secretary Matt Hancock, who has offered to take the vaccine on live television, said the roll-out was a "key moment" that would protect the most vulnerable.

European Union authorities are also reviewing the vaccine, alongside rival products developed by US biotechnology company Moderna, and a collaboration between Oxford University and pharmeceutical producer AstraZeneca.

This is an updated version of a previous story.