Although the United States has hit a grim milestone in the pandemic, overall daily case numbers and deaths are dropping. President Joe Biden has urged Americans to "remain vigilant."

The number of coronavirus deaths in the United States surpassed 500,000 on Monday, according to data from the Johns Hopkins University.

The US has by far the highest COVID death toll of any country in the world, with 20% of the nearly 2.5 million global deaths from coronavirus.

The half a million Americans who have died from COVID-19 exceeds the US death toll from World War I, World War II and the Vietnam War combined.

President Joe Biden said the death toll was a "truly grim, heartbreaking milestone," while urging people to resist "viewing each life as a statistic."

"As a nation, we can't accept such a cruel fate. While we've been fighting this pandemic for so long, we have to resist becoming numb to sorrow," Biden said during an emotional speech at the White House.

"I ask all Americans to remember, remember those we lost and those they left behind," he said. "I also ask us to act, to remain vigilant, to stay socially distant, to mask up, to get vaccinated." 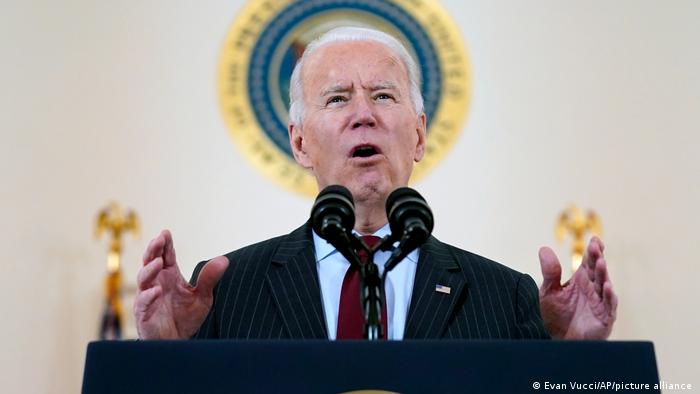 How is US commemorating the dead?

On Monday, church bells at the National Cathedral in Washington rang 500 times to symbolize the 500,000 people who lost their lives during the pandemic.

On the White House steps, 500 candles were lit to commemorate the dead as a military band played a rendition of "Amazing Grace."

President Biden has ordered all flags on federal properties and military facilities to be lowered to half-staff until Friday evening.

Anthony Fauci, the country's top infectious disease expert, said Monday that political divisions in the US had contributed to the "stunning" death toll, where even mask wearing has become a political statement, rather than a public health measure.

"Even under the best of circumstances, this would have been a very serious problem," Fauci told the Reuters news agency.

"However, that does not explain how a rich and sophisticated country can have the most percentage of deaths and be the hardest-hit country in the world," he added.

US tackling the pandemic head-on

US tackling the pandemic head on

What could be next?

Despite the bleak milestone, the number of new cases and deaths in the US has dropped over the past several weeks.

The country's nationwide vaccination campaign, which started in December, has already inoculated a total of 64.2 million people, according to the Centers for Disease Control and Prevention.

But despite the dip in deaths and cases, and mass vaccination campaigns, a model from the University of Washington has predicted at least 90,000 more COVID-related deaths in the US by June.