After six weeks of strict lockdown, Spaniards will be allowed to go on walks and engage in sports outside of their homes. Health authorities say the COVID-19 pandemic has been brought under control. 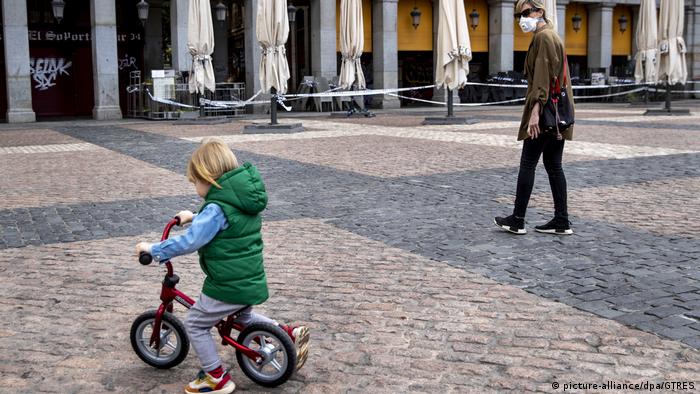 Spain's government released a four-phase plan on Tuesday for a gradual "de-escalation" of its coronavirus lockdown, one of Europe's strictest.

In the preparatory phase, the country will allow hairdressers and similar service-based businesses to resume work between May 4 and May 11. Restaurants would be allowed to serve take-away food. Professional athletes would resume training.

The official first phase would start some two weeks after May 11 in most of the country, with small businesses, bars, restaurants, and places of worship all reopening under strict conditions

The second phase would see theatres, cinemas, art galleries, and museums opening, but only working up to one-third of their capacity. Some schools would reopen and hunting and sports fishing would be allowed,

The third phase is set to start in late June, with more shops opening and restictions loosened.

Spaniards have been home for six weeks, after the country's coronavirus cases and deaths shot up exponentially in mid-March.

Prime Minister Pedro Sanchez's government has been developing the gradual lockdown easing plan over the past few weeks.

Previously, Health Minister Salvador Illa said that Spain had managed to control the pandemic and that the country's health system was also capable of handling a possible "second wave."

"The goal now is to continue to hold a sustained increase in cured cases and that the new daily infections remain in the 1% range," Illa said.

The health minister said that the gradual lockdown easing will have to be "step by step, with a lot of caution and good judgment." Authorities have insisted that strict hygiene and social distancing is a requirement in outside spaces.

Lockdown easing began Monday, when for the first time, children under 14 were allowed to go outside for one hour with one parent, albeit under strict social distancing rules.

The gradual de-escalation is expected to be the same for all regions, with some exceptions that will depend on how severely an area has been affected.

Starting on May 2, Spaniards will be allowed to go for walks with members of their own household and engage in outdoor sports.

Economic activity in factories may also be slowly restarting. A Barcelona factory for Spanish automobile manufacturer Seat began partial production on Tuesday, under strict social hygiene rules and with only 3,000 of its 11,000 workers.

The Spanish government is following the lead of countries like Italy in pairing its lockdown easing with antibody testing. Public health authorities said it was critical for them to "understand the real scope of infection."

Raquel Yotti, director of the Carlos III Health Institute, said these efforts include calculating the number of people who have had contact with the virus and who have developed antibodies.

Some 90,000 people from 36,000 households, who were selected based on statistical criteria, have volunteered to participate in the study.

The restrictions around the coronavirus outbreak have made it impossible for thousands of migrant workers to come and harvest crops in Spanish fields. But that's just one of the many problems local farmers face. (15.04.2020)

Amid the debate about coronabonds, the Spanish government wants to push through long-term financial measures to help the poorest. The idea perturbs even economists in Spain, as Stefanie Müller reports from Madrid. (12.04.2020)