Coronavirus restrictions have made life more difficult for people experiencing homelessness in Germany this year. Those who have lost their jobs or work part time are less willing to share with people in need. 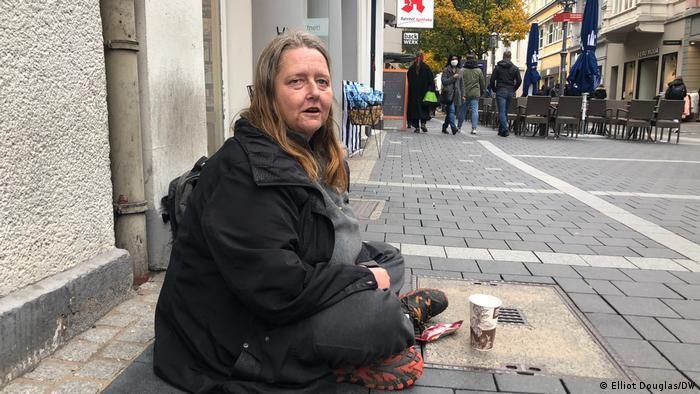 "People are holding their wallets closer," Yvonne says, glancing glumly at the passersby scurrying towards the train station. "I think maybe they just don't have as much money to give away."

Yvonne is sitting on the ground on a busy street in Bonn's pedestrian shopping area close to the central train station. She stares into the cup in front of her, which holds a few small coins.

"I used to get a €5 bill quite frequently," she says. "Now that never happens."

Around 50,000 people in Germany live on the street and less than a quarter of them are women.

Read more: In March Berlin opened a hostel for the homeless amid coronavirus pandemic

Figures from the state of North Rhine-Westphalia, where Bonn is located, show a steady rise in homelessness over the last few years. In Bonn, between 2011 and 2018, the official number went from 214 people to 812, a trend seen in all large cities across the state.

"The main reasons for the rising number of homeless people are theinsufficient supply of affordable housing, the shrinking of the stock of social housing and consolidation of poverty," Werena Rosenke, head of the German Federal Working Group for Homelessness Aid, wrote on the group's website.

Around 600,000 people live in shelters and other accommodation run by charities. 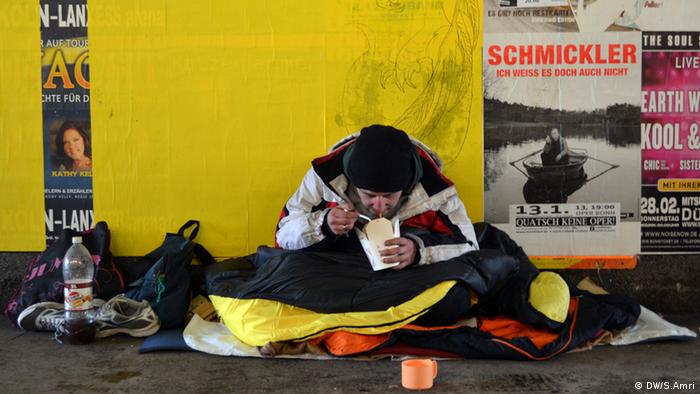 The number of homeless people is rising across Germany

Fifty-year-old Yvonne was homeless for three years but before the pandemic, she was assigned a social housing apartment on the outskirts of the city. She says she receives only a few hundred euros a month from the government, an income which she supplements with begging.

Read more: From sleeping bags to own homes

Money can disappear quickly, says Yvonne. German authorities have recently cracked down on mask-wearing, which has been compulsory in shops, restaurants and on public transport since June.

"I was walking through the train station and this policeman appeared from nowhere. I got a fine of €150 ($175) for not wearing a mask," Yvonne says. "That was all I had left for the month." Now she is careful to keep a face-covering with her at all times: she shows me the much-used purple disposable mask she has had in her pocket for several weeks.

But many homeless people are very aware of the pandemic. "They really worked to understand the regulations," Bonn-based social worker Nelly Grunwald told DW during the first lockdown.

Grunwald works for an organization that offers a safe place for homeless people to eat. "They are very sensible and don't want to get infected or infect us. They mostly stick to the rules among themselves," she added.

Yvonne is also a recovering heroin addict, which shapes her daily life.

"I have to come into the city center to the doctor every day to receive [heroin substitute] methadone," she explains. "Luckily, I could do that even during the first lockdown, the doctors' surgeries stayed open."

She says she usually begs outside the station, even though there are more people inside: she wants to avoid the "addicts" (as she puts it) who spend their time on the platforms.

Coronavirus leads to increase in homelessness in the US

Potential generous passers-by have more money worries now than before the pandemic: some 12 million people were on the government's "short-term work scheme" for much of the spring and summer, and the unemployment rate rose to 4%. People are also spending less time out and about, making begging difficult.

"Where am I supposed to go to the toilet when cafes are closed?" she asks. "Some cafes let you in. But in the train station, you have to pay — and even those toilets were closed for a little while [in the first lockdown]. When everything was shut, it was really difficult. I would have to hold it in or waste time by going all the way back to my apartment to use the bathroom."

But Yvonne is broadly optimistic. While we talk, a teenager with a billboard advertising the opening of a new supermarket cycles by, offering free muesli bars and treats to people in the street. Yvonne accepts three, eyeing them suspiciously.

"Nuts," she sighs. "Do you want one? They don't look that tasty." When I say no, she shrugs and stashes them away for later. "You need to plan ahead," she says.

With winter coming and no-one sure how long the latest restrictions will remain in place, the situation is unlikely to get any better.

"I think if you're all by yourself, homeless and begging on the street this winter — I can't imagine anything worse."