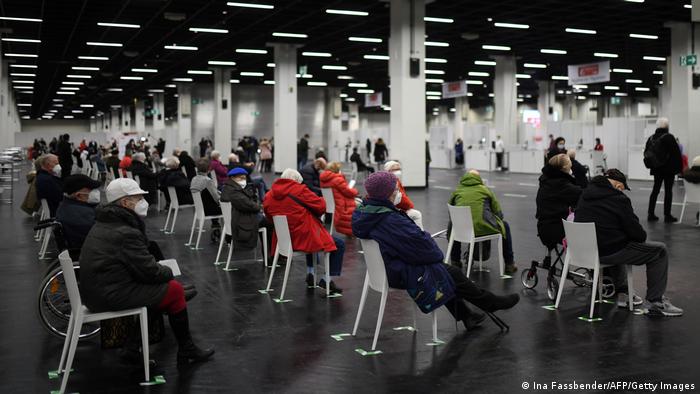 Germany should prioritize people for coronavirus vaccines by the number of their social contacts rather than their age, immunology expert Michael Meyer-Hermann told local media on Sunday.

Meyer-Hermann, from the Helmholtz center for Infection Research in the central German city of Braunschweig, told the Berlin-based Tagesspiegel newspaper that first giving vaccines to those with the most contacts "would have a much greater effect."

He pointed out that the plan followed by Germany and most other countries of vaccinating the elderly and most vulnerable first had reduced the number of deaths, but had not had a significant impact on the pandemic as these people tended to have the fewest social contacts.

What is Germany's coronavirus outlook?

The immunologist also criticized Germany's plan to ease lockdown measures, especially as the more virulent strains of the virus were increasingly spreading throughout the country.

He predicted that case numbers would "explode" as they have done in Ireland, Britain, Portugal and the Czech Republic.

'We are in a third wave'

Karl Lauterbach: COVID strategy 'will not curtail the third wave'

Gernot Marx, head of the German intensive care association (DIVI), said, in an interview with Funke Media Group, that if Germany manages to significantly increase its vaccination program, then "we will have defeated the pandemic by the end of September."

He said that data from Israel showed that those who had already been vaccinated could no longer infect others, but he warned that some hygiene measures should be maintained so as not to lose the progress afforded by the vaccine.

What is the current vaccine situation in Germany?

As of Friday, 71 days since the first jab was administered, 4.9 million people in German had been administered at least one vaccine, of which 2.4 million had received both shots and were thus fully vaccinated against COVID-19, according to the government run vaccine dashboard.

The number of daily vaccinations had also increased to over 170,000 on both Thursday and Friday. The number of vaccines being administered has increased in previous weeks amid criticism of the country's slow vaccine roll out.