France is set to tighten controls in its Moselle region, as the rate of infection due to new variants rises in the area. From Monday, cross-border workers will have to submit to a PCR test before crossing. 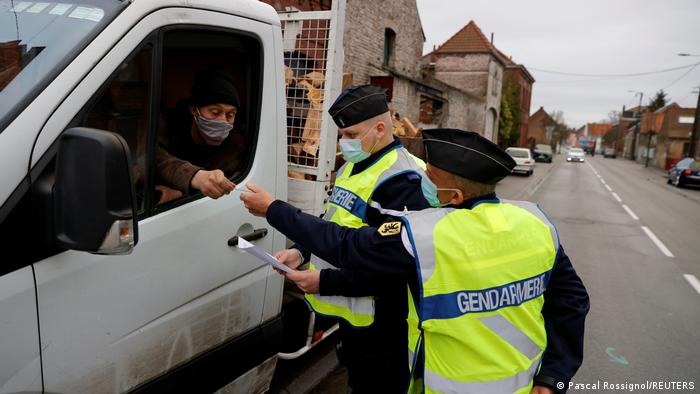 French officials check cars at the French-Belgian border in Maulde

France on Thursday said it would tighten controls at the German border to curb the spread of coronavirus, which is spreading faster in the eastern Moselle region than elsewhere in France.

"Strengthening of health measures at the Franco-German border in Moselle, from March 1," the Ministry of Solidarity and Health tweeted.

From Monday, workers commuting between Germany and Moselle will have to submit to a weekly PCR test before being allowed to cross the border, Health Minister Olivier Veran and European Affairs Minister Clement Beaune said in a statement.

The new measures follow a warning from the German government last week that it was considering extending new travel restrictions to its French border, due to the rise of new, more infectious virus variants in the Moselle region.

How far do the controls extend?

French workers regularly crossing the border with Luxembourg will not be targeted by the new requirement. The current rule that travelers other than cross-border workers arriving from another EU country must take a PCR test ahead of arrival in France is still in force.

France said that joint border police patrols "could be reinforced" to ensure compliance.

The move comes as EU leaders held a virtual summit to discuss pandemic-related topics, including border closures and vaccine passports. The European Commission has criticized recent border closures in several EU countries as disproportionate, and has written warning letters to Belgium, Denmark, Finland, Germany, Hungary and Sweden about their measures.

Checks implemented at Germany's borders with the Austrian state of Tyrol, the Czech Republic and Slovakia earlier this month wreaked traffic havoc and caused travel chaos in some of the regions.