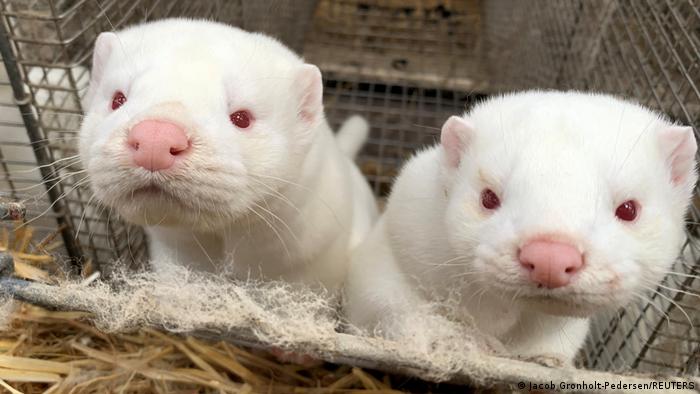 Denmark has killed millions of mink as it tries to cull its entire population of the animal in a bid to prevent the spread of the coronavirus after a particular mutated strain of the virus was found to have infected at least 12 people.

Countries across Europe have detected infections in their mink farms, prompting fears of further culls.

Here are five things to know about the mink infections.

Why are minks being culled?

Earlier this month, the government of Denmark — the world's largest fur exporter — ordered all of its roughly 15 million mink be killed.

This came after finding that mutated versions of the coronavirus had developed in the animals and jumped to at least 373 people.

One of those mutations might jeopardize future vaccination efforts.

How is this infection different?

Several animals, including cats, dogs and even lions and tigers at the New York zoo, have been found to carry to virus. But mink are the only animal known to be capable of infecting humans, partly because they are more likely to receive a heavy viral load in their crowded cages.

Denmark found that the virus had mutated in the mink and split into at least five different strains. Viruses commonly mutate, and new variants are not necessarily worse that previous ones.

However, one of the mutations — dubbed "Cluster 5" — was found to be particularly resistant to antibodies. It was found in 12 people in August and September.

The "Cluster 5" strain has a mutation in the gene encoding the coronavirus' spike protein, which it uses to enter cells. This spike protein is an identifying feature, which many vaccines use to train the immune system. Therefore, this mutation could make future vaccines less effective.

Where has it spread?

The first case of a farm worker being infected with SARS-CoV-2 by a mink was registered in the Netherlands in April. Since then, more than 1 million mink have been killed at the 69 farms found to be affected.

Most recently, 169 mink were found to have the virus on a farm in Lithuania after some of the animals suddenly died. Lithuania has 1.6 million mink on 86 farms.

The Polish government has denied its mink are infected, despite a team of researchers from Gdansk Medical University confirming the presence of coronavirus among eight out of 91 minks tested at a mink farm in northern Poland.

Nonetheless, Poland is preparing legislation to regulate the potential culling of animals and compensation for farmers.

Ireland is planning to cull its population of 100,000 mink.

Was the Danish cull legal?

No. The government ordered the killing of the entire population of mink despite not having the authority to do so. This has caused a huge controversy in the country, and led to calls for the resignation of Prime Minister Mette Frederiksen.

Danish mink are prized for the high quality of their fur. The Danish industry employs 6,000 people and exports fur pelts worth $800
million (€670 million) annually.

The head of the Danish mink breeders' association said earlier this month that the industry is now completely finished.

Prime Minister Frederiksen, in tears, visited a mink breeder on Friday and apologized for her government's handling of the affair.

Dead mink are rising out of the ground in Denmark after being buried in unsuitable conditions. Authorities blame shallow graves and poor soil quality.

Denmark is considering a ban on all mink breeding until 2022.

Danish health authorities last week announced the "Cluster 5" strain was "most likely" extinct, and had not been found in any more people.

And Russia is considering vaccinating its mink to prevent any infections there.

All non-residents coming from Denmark will no longer be allowed into the UK, the government announced. Denmark ordered a nationwide mink cull after a mutated version of the coronavirus was transmitted to humans.

Authorities are ordering farms to close after the novel respiratory virus broke out among the animals. The disease is bringing forward plans to wind down the industry in the country.