Clashes broke out on Sunday in Amsterdam, Eindhoven and Stein, a small city near the Dutch-Belgium border, over the introduction of a nationwide curfew to curtail the spread of the coronavirus.

The violence came hours after a group of young people torched a viral testing center overnight in Urk, a fishing industry city northeast of the Dutch capital.

Security forces in both cities used water cannon as well as batons, horses and dogs — and in Eindhoven tear gas — to quell the protests. 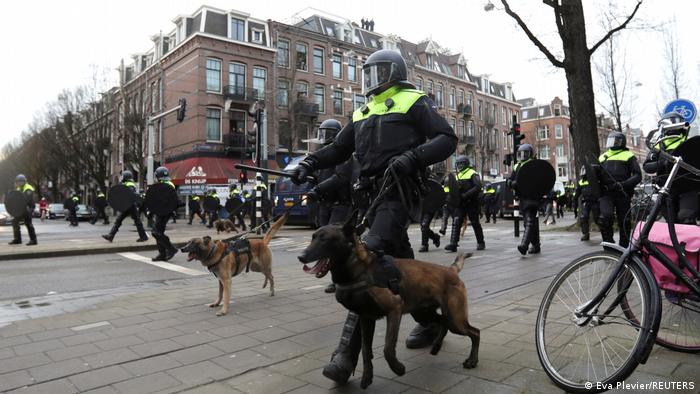 Fearing a riot or a disease-spreading event, Mayor Femke Halsema had designated the square as a "high-risk zone" and gave police the power to preemptively frisk people for weapons.

And in Stein — near Maastricht close to Belgium — clashes with police occurred as they broke up an illegal party reportedly attended by 100 people. 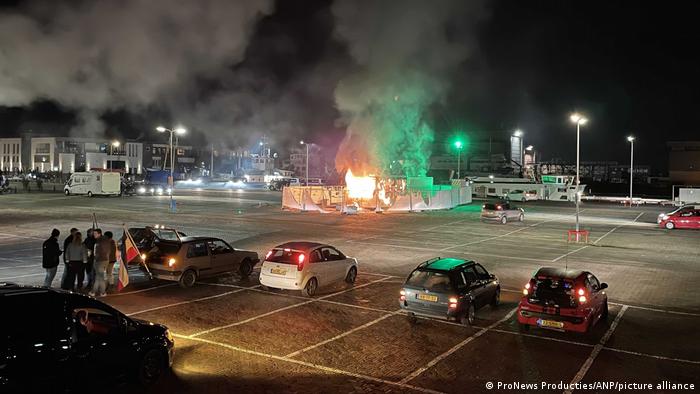 In addition, more than 3,600 fines were handed out and 25 persons arrested on Saturday night as the Netherlands' first nighttime curfew of the pandemic came into force to rein in a more transmissible variant of the coronavirus. Alleged curfew violators were handed fines of €95 ($116) each.

In Urk, a fishing industry city of 21,000 residents, on Saturday night, dozens of people hurled stones and fireworks at police.

A group of youths set fire to an Urk coronavirus testing center, and pepper spray was used against reporters of the public broadcaster NOS.

On Sunday, municipal officials deplored the overnight rioting. "This is not only unacceptable but also a slap in the face, especially for the local health authority staff who do all they can at the test center to help people from Urk," they said.

Local authorities added that the curfew would be strictly enforced for the rest of the coming week.

Journalist Michel Kerres told DW that the collapse of the Dutch government 10 days ago, over a child welfare scandal, has likely spurred protesters:

"We now have a caretaker government and the political debate is heating up, going into elections in March. There is more restlessness and people are disappointed that things are taking very long, that the coronavirus is not going away and that the Netherlands is doing very badly with vaccines."

Brexit hits German exports to the UK 1h ago