Coronavirus digest: US expected to begin vaccinating next month

The head of Operation Warp Speed has said he would begin sending out vaccinations within 24 hours of approval. Meanwhile, another protest against protective measures has taken place in Berlin. Follow DW for the latest. 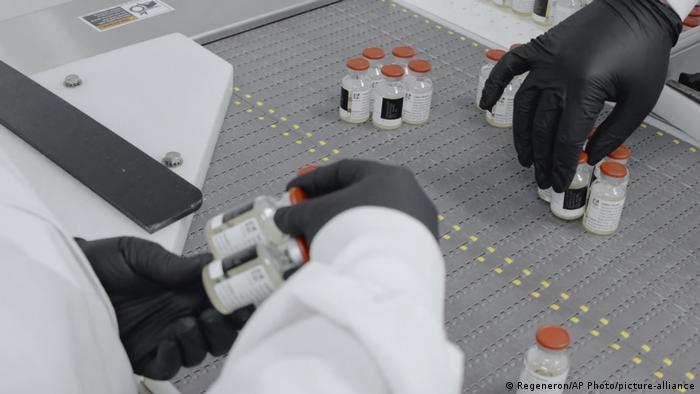 Dr. Moncef Slaoui, head of the Operation Warp Speed coronavirus vaccine program in the United States, said Sunday he plans to ship vaccines across the country within 24 hours of approval from the Food and Drug Administration (FDA), with vaccinations beginning on December 12.

The FDA, which oversees vaccine production in the US, is scheduled to meet on December 10 to discuss Pfizer's request for emergency authorization for its COVID-19 vaccine. The American company and German partner BioNTech announced earlier this month that the vaccine appeared to be 95% effective at preventing COVID-19.

The Group of Twenty, or G20 nations, has emphasized the need for global access to coronavirus vaccines during the group‘s virtual summit hosted by Saudi Arabia on Saturday.

"Although we are optimistic about the progress made in developing vaccines, therapeutics and diagnostics tools for COVID-19, we must work to create the conditions for affordable and equitable access to these tools for all people," said Saudi King Salman, the host of the summit.

Leaders from across the world, including German Chancellor Angela Merkel, outgoing US President Donald Trump, Russian President Vladimir Putin and others, participated remotely in the two-day gathering that saw them pop up in windows on a large screen. 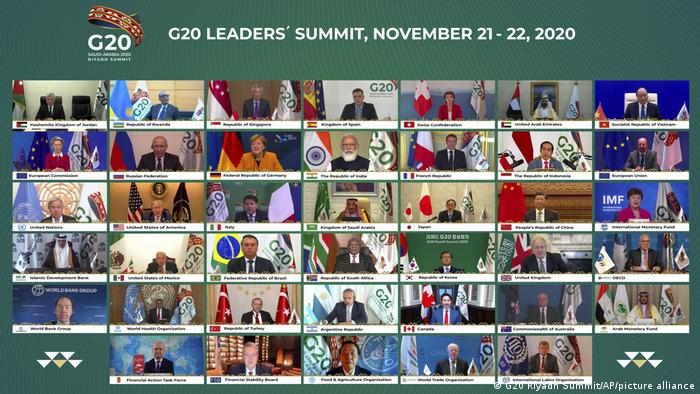 According to the organizers, there is still a $4.5 billion (€3.8 billion) funding shortfall for COVID-19 vaccines. G20 nations have, so far, contributed over $21 billion to combat the coronavirus. The group has also injected $11 trillion to "safeguard" the world economy, which has been severely impacted by the pandemic.

The November lockdown in Germany aimed at taming the coronavirus spread, often called "lockdown light,"  should be extended into December, according to Vice Chancellor Olaf Scholz and Bavarian State Premier Markus Söder.

"Everything suggests that the current restrictions [on interpersonal contacts] must be extended for a while beyond November 30," said Scholz on Sunday.

"In any case, for two or three weeks," added Söder.

The comments came ahead of further pandemic crisis talks next week involving Chancellor Angela Merkel and the premiers of Germany's 16 states, which in the country's federal system are tasked with implementing measures.

Earlier, about 1,000 protesters took to the streets of Berlin to stage a "silent march" against the "light" lockdown policies.

The march was organized by members of the Querdenken (Lateral Thinking) group which has staged protests against lockdown measures throughout the country. The majority of the protesters, who marched through the northeastern district of Prenzlauer Berg, wore masks, as prescribed by the rules. Some who didn't wear masks presented medical forms that claimed that they did not have to wear a mask, but police said they were not authentic.

Several hundred counterprotesters gathered along the route, shouting slogans and banging pans to disrupt the silence. The Querdenken group has been criticized for associating with right-wing extremists.

American biotech company Moderna will charge governments between $25 and $37 for every dose of its coronavirus vaccine, depending on the size of the order, the company's CEO Stephane Bancel told German newspaper Welt am Sonntag.

"Nothing is signed yet, but we're close to a deal with the EU [European] Commission. We want to deliver to Europe and are in constructive talks," he said, as the European Union looked to secure millions of doses for a price below $25 per dose.

The company has joined the league of vaccine front-runners after late-stage clinical data showed that its experimental shot was 94.5% effective in preventing COVID-19.

The coronavirus lockdown in the United Kingdom will end as scheduled on December 2, according to Prime Minister Boris Johnson's office. This will mark a return to regional restrictions following the stabilization of coronavirus infections.

After the November 5 lockdown ends, the UK will return to a three-tiered system of localized restrictions.

The government is also expected to announce a one-year package worth £3 billion (€3.36 billion, $3.98 billion) to support the state-run National Health Service in tackling the pandemic.

Authorities in France have ordered the culling of all minks at a farm located just west of Paris, after analysis showed a mutated version of the virus was circulating among the animals.

The government released a statement Sunday that said about 1,000 minks have been culled and all animal products were eliminated from the farm in question. There are four mink farms in the country, according to the government. Of the other three farms, one did not have the coronavirus, while the other two were undergoing testing as of Sunday.

The French government said farmers who have been in contact with the animals have all tested negative for the virus so far.

The Food and Drug Administration (FDA) in the United States has issued emergency authorization for the use of Regeneron Pharmaceuticals Inc's coronavirus antibody therapy — an experimental treatment given to President Donald Trump that he said helped cure him of the disease.

The FDA said Saturday that the therapy should be administered to patients with mild to moderate symptoms who are at high risk of progressing to severe COVID-19. This includes those who are 65 years of age or older or who have certain chronic medical conditions.

The treatment is part of a class of drugs known as monoclonal antibodies, which are manufactured copies of antibodies created by the human body to fight infections.

Regeneron's REGEN-COV2 "antibody cocktail" is designed so that the two antibodies seek out and bind to the coronavirus' spike protein to prevent it from entering healthy human cells.

The US reached a new high of 12 million coronavirus infections on Saturday, just six days after the country crossed 11 million cases, according to data from Johns Hopkins University.

The daily increase in infections is fast approaching 200,000, just weeks after the US hit 100,000 new infections in a day for the first time. The US has the highest number of coronavirus fatalities in the world, with over 255,000 people dead.

South Korea has reported more than 300 new infections for the fifth day in a row, with 330 cases reported at the end of Saturday. Officials have warned that stricter restrictions may be imposed if the upward trend does not subside.

An official from the Korea Disease Control and Prevention Agency (KDCA) said the country was at "a critical juncture," and the inability to reduce the daily infections could result in stricter social distancing regulations going forward.

South Korea announced Sunday that there would be stricter social distancing policies in the capital, Seoul, starting Tuesday.

Nightclubs and most other indoor entertainment facilities will shut down, and late-night dining will no longer be allowed. Patrons will not be allowed to drink or eat in cafes, internet cafes or fitness centers. Audiences at sporting events will be limited to 10% of the facility's capacity.

Health Minister Park Neung-hoo said Sunday that authorities have found 62 virus clusters in the past two weeks. The stricter measures in Seoul will last for two weeks.

Singapore and Hong Kong have postponed plans for an air travel bubble between both cities as the number of infections in the latter act as a "sober reminder" of risks to public health.

"For any scheme to be successful, they must fulfill the condition of securing public health, and also make sure that both sides would be comfortable and feel safe about the scheme," said Edward Yau, Hong Kong's minister of commerce and economic development.

"In light of the situation in Hong Kong, I think it's the responsible way to put this back for a while, and then sort of relaunch it at a suitable juncture." 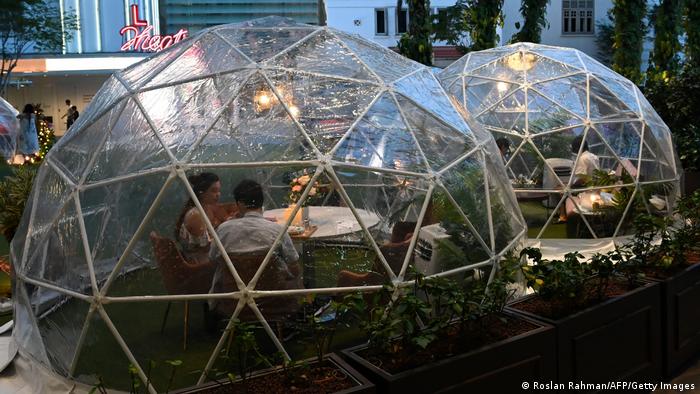 People dine inside an enclosed space in Singapore

The Chinese territory reported 43 new infections on Saturday, delaying the travel bubble's inaugural flight, which was set to take off on Sunday. The plans may now be delayed by at least two weeks.

Authorities in China are conducting mass testing and shutting down schools after the country reported three new domestically transmitted cases in the past 24 hours. The northern Inner Mongolia province reported two cases, while Shanghai reported one.

Manzuhouli, in Inner Mongolia, began testing all of its residents on Sunday. The city has already closed classes and public venues.

Shanghai has begun testing all residents in the Pudong New Area district. The country has already begun mass testing for up to 3 million residents in the northern port city of Tianjin after five cases were found there last week.

Authorities in Sri Lanka said there have been more than 600 confirmed COVID cases in prisons there as infections surge in the capital and suburbs. At least 652 cases have been reported across five prisons, affecting 609 inmates and 43 prison officers.

US disease experts warn people not to travel over Thanksgiving

Bamlanivimab and REGN-CoV-2 are two promising antibody treatments to combat COVID-19. How do they work?