More than 100,000 Americans are hospitalized due to COVID-19, marking a new all-time record. President-elect Biden gave a dire warning as cases continued to rise. DW rounds up the latest developments. 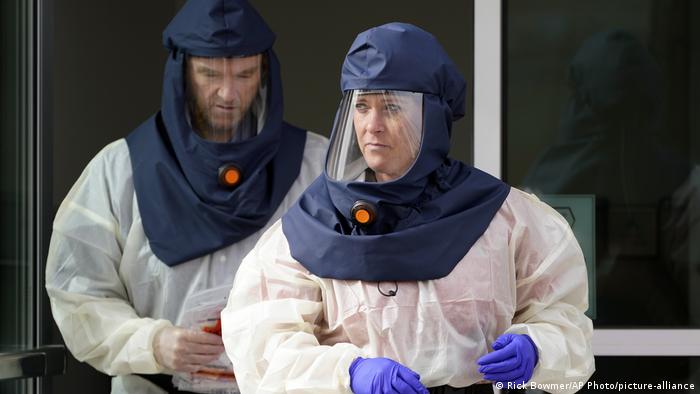 Coronavirus hospitalizations in the US surpassed an all-time high on Wednesday. A record of 100,226 Americans are hospitalized with COVID-19, according to data collected by COVID Tracking Project.

Director of the US Centers for Disease Control and Prevention (CDC), Robert Redfield warned: "December, January and February are going to be rough times. I actually believe they're going to be the most difficult time in the public health history of this nation."

The pandemic has put a huge strain on the healthcare system of the US, the worst-affected nation worldwide. Almost 200,000 new cases were reported on Wednesday, and 2,753 new deaths.

The UK became the first country in the Western world to approve the Pfizer-BioNTech vaccine for use. It will be rolled out to the public next week.

The EU's medicine regulator, European Medicines Agency (EMA) will hold a special meeting on December 29 on whether to roll out the Pfizer-BioNTech vaccine for use. The body insisted it had the "most appropriate" method to approve vaccines, after Britain announced it will use the vaccine use next week.

UK ministers falsely claimed that Brexit had freed them to adopt the vaccine before the EU. In reality, the EU's 27 member states are free to approve a vaccine for temporary emergency use if they so desire.

Former French President Valery Giscard d'Estaing, who was in power from 1974-81, died on Wednesday at age 94, due to complications arising from COVID-19. He had previously been hospitalized due to heart issues.

German federal and state governments have agreed to extend the country's current partial lockdown until January 10, Chancellor Angela Merkel announced on Wednesday. She will hold talks with Germany's 16 state leaders again on January 4 to reassess the situation.

"Generally, things will remain as they are now," Merkel said.

Russian President Vladimir Putin has announced a large scale immunization campaign in Russia, which is set to begin by late next week. The country will be administering its domestically developed Sputnik V vaccine, which received regulatory approval in August.

Experts have warned that the Russian vaccine is yet to complete the advanced studies needed to ensure its effectiveness and safety as per current scientific protocols.

The Italian Health Ministry has banned midnight masses, as the country reports more fatalities than any other European nation during the recent weeks. Italians will also not be able to move between regions during the holiday period, except in emergency cases.

Christmas Eve mass will end at 8:30 pm this year, so that attendees can make it home in time for the 10 pm curfew that has already been imposed.

Slovenia's government says it will begin mass testing this month after restrictions imposed to curb the spread of coronavirus did not have the desired effect. Health Minister Tomaz Gantar told a news conference that the first 100,000 test kits will be delivered in just over one week and that the government planned to acquire 1.5 million antigen tests for the 2-million strong country.

He added that lockdown measures that have been in place since mid-November would be extended by another week. The country has 80,000 confirmed cases and nearly 1,600 deaths.

The idle gondolas of Venice

US President-elect Joe Biden warned of a "dark winter" during a livestreamed round table with workers affected by the pandemic.

"We're likely to lose another 250,000 people dead between now and January. You hear me? Because people aren't paying attention," he said. His predictions seemed far bleaker than those made by experts, but his team is yet to clarify the remarks.

The mayor of Los Angeles has announced an emergency order directing all residents within the city to remain in their homes effective immediately.

Prime Minister Scott Morrison said Australian borders will remain shut for "some time," for people who are not Australian citizens or permanent residents. "On international borders we're still some time away from that," he told reporters.

Australia's pharmaceutical regulator said it is on course to review Pfizer's COVID-19 vaccine by January 2021. The country has not made any changes to its timetable to roll out the vaccine in March, despite the UK's approval.

The UN General Assembly will be holding a special session starting Thursday on the response to COVID-19 and the best path to recovery, where about 100 world leaders and a few ministers are slated to speak.

Volkan Bozkir, president of the General Assembly said that the session "provides a historic moment for us to come together to beat COVID-19."

Thousands of migrants cross Guatemala in US-bound caravan 3h ago