China is facing its biggest rebound of COVID-19 infections. Meanwhile, the UK is set to announce its strategy for booster jabs ahead of the winter months. Follow DW for the latest. 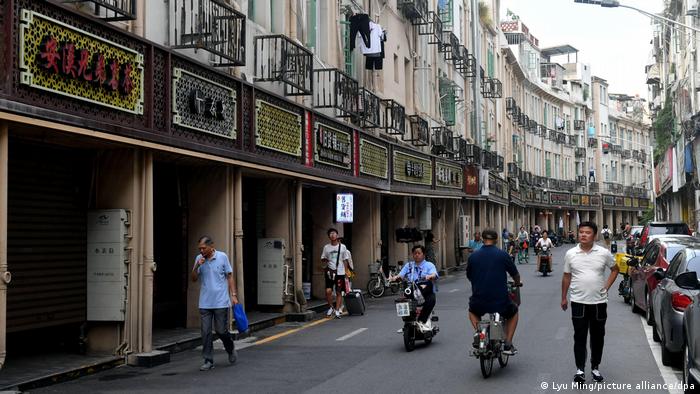 The city of Xiamen in Fujian province, China has locked down high risk area

China is racing to control new local COVID-19 infections which have more than doubled in its southeastern province of Fujian.

The country's National Health Commission reported 59 new domestically transmitted cases on Tuesday, up from 22 the day before. All of the cases were in Fujian province.

A total of 102 community infections have been reported in the province in just the last four days.

The first case was reported in Putian, a city of 3.2 million, on September 10. The virus has since spread south to Xiamen.

Both cities have locked down high-risk areas and began city-wide testing on Tuesday.

The latest outbreak, spurred by the highly contagious delta variant, comes ahead of the week-long National Day holiday starting October 1.

Here's the latest coronavirus news from around the world:

Japan will donate an additional 1.3 million doses of the AstraZeneca COVID-19 vaccine to Taiwan and other Asian neighbors, Foreign Minister Toshimitsu Motegi said.

The Australian Capital Territory, home to Canberra, will remain in lockdown for another four weeks.

The ACT first went into lockdown for a seven-day period last month after it recorded its first COVID-19 case in the community since July 2020.

New South Wales and Victoria saw new infections slightly ease on Tuesday, but officials said they would need to see a steady drop in daily cases before concluding that the infections had peaked.

The majority of the cases were reported in the two state capitals, Sydney and Melbourne.

In Russia, President Vladimir Putin is self-isolating after coronavirus cases emerged in his inner circle. He has cancelled plans to appear in person at a regional summit in Dushanbe, Tajikistan later in the week.

British Prime Minister Boris Johnson is set to announce a strategy for giving vulnerable groups and the elderly a booster shot of the COVID-19 vaccine.

Germany reported 6,325 new cases on Tuesday and 68 additional deaths, according to the Robert Koch Institute of Infectious disease. The latest figures take the total infection to 4,089,476 and fatalities to 92,686.

South Africa's president has announced the easing of some restrictions and urged citizens to get vaccinated. Less than 20% of South Africans are fully vaccinated as the authorities urge a boost in vaccine take-up.

Florida Governor Ron DeSantis has threatened to fine cities and counties that would mandate employees to get vaccinated against COVID-19.

"If a government agency in the state of Florida forces a vaccine as a condition to employment, that violates Florida law," he said in a press conference. "And you will face a $5,000 fine for every single violation," he added. "That's millions and millions of dollars potentially in fines."

The southern US state has recorded more than 3.4 million cases of COVID-19.

BioNTech-Pfizer confident about their vaccine for kids

The German team behind the BioNTech-Pfizer COVID vaccine still hopes for swift approval for its jab in kids aged 5 to 11.