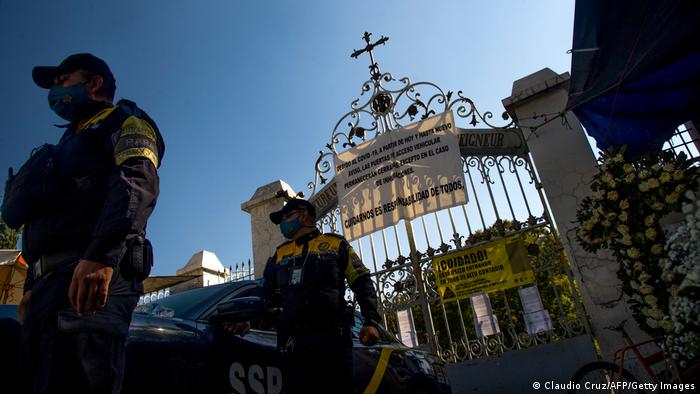 Leaders of the world's 20 largest economies (G20) will debate how to deal with the pandemic this weekend and how to manage the recovery once the virus is under control.

To prepare for future pandemics, the EU will propose a treaty on illnesses that spread around the world.

"An international treaty would help us respond more quickly and in a more coordinated manner," said Charles Michel, the president of the European Council.

The International Monetary Fund said in a report for the G20 summit, hosted virtually by Saudi Arabia this weekend, that the economic recovery will be uneven and the pandemic will likely leave deep scars.

G20 nations have contributed more than $21 billion (€18 billion) to combat the pandemic, which has infected 56 million people globally and left 1.3 million dead, and injected $11 trillion to "safeguard" the virus-battered world economy, organizers said.

World leaders are intensifying international efforts for a large-scale rollout of coronavirus vaccines after several companies announced a breakthrough in trials. Calls are growing for G20 nations to plug a $4.5 billion funding shortfall.

"The G20 committed in March to do 'whatever it takes to overcome the pandemic and protect lives and livelihoods,'" British Prime Minister Boris Johnson said, referring to an earlier forum. "As we meet this weekend, we must hold ourselves to account for that promise."

Germany reported 22,964 new COVID-19 cases, according to data released Saturday by the Robert Koch Institute, the country's disease monitoring agency. That is a slight decrease from the record 23,648 cases announced a day earlier. The country also reported 254 more deaths.

"The state of emergency will last as long as is necessary to fight against the pandemic," said Portuguese President Marcelo Rebelo de Sousa.

More than 80% of the country has been under a partial lockdown. New measures to reduce the spread of the coronavirus starting from Tuesday will be announced Saturday.

Doctors in Switzerland have urged people vulnerable to severe cases of COVID-19 to record their wishes for end-of-life care to ease pressure on intensive care units.

The Swiss Society for Intensive Care Medicine (SGI) called this week for the "especially imperiled" including people over 60 or with health conditions such as heart disease to put their wishes on paper in case they might not be able to communicate while ill.

The number of deaths in the Czech Republic linked to COVID-19 doubled in November and passed the 7,000 mark, Health Ministry data showed on Saturday.

Recorded fatalities reached 7,021 as of Saturday, compared with the 3,523 recorded by the end of October.

The country, one of the worst-hit in Europe by the pandemic, has seen a fall in the number of new cases and hospitalized patients in recent weeks, allowing the government to ease some curbs.

The number of hospitalizations dropped to 6,307 compared with a peak of 8,283 recorded on November 6.

In Poland, Prime Minister Mateusz Morawiecki has warned his country's nationals against any travel over the Christmas period, as he extended most coronavirus curbs but said shops could reopen next week.

Morawiecki said theaters, bars and restaurants would remain closed until after Christmas, and schools would continue to teach students remotely.

"The situation is still very serious," he said, voicing concern about Poland's high death rate but pointing out that the number of new cases had stabilized.

The Health Ministry on Saturday reported 574 deaths over 24 hours, bringing the total toll to 13,288 — the third highest in the EU after Italy and France, according to an AFP tally.

Japan says it will suspend a domestic travel marketing campaign in areas where coronavirus infections are especially high.

“We will suspend new reservations under the Go-To Travel program for trips destined for regions seeing a rise in coronavirus infections,” Prime Minister Yoshihide Suga said on Saturday.

The decision was made as cases in the capital, Tokyo, hit a record high of 539.

Suga has been attempting a balancing act of revitalizing Japan's hard-hit economy while keeping the spread of the coronavirus under control.

There are also concerns of a surge in cases following the Labor Thanksgiving holiday on Monday.

Hong Kong says the planned travel bubble or corridor with Singapore would be postponed after a spike in coronavirus infections inside the southern Chinese city.

"In the light of [a] recent surge of local cases we have decided, together with the Singapore government, to defer the air travel bubble's launch by two weeks," Commerce Secretary Edward Yau told reporters.

In China, mass coronavirus testing has begun in the northeastern city of Tianjin, state news agency Xinhua reported on Saturday.

All residents in the sprawling Binhai New Area, home to the largest port in the north and some 3 million people, will undergo testing in response to a cluster of cases that has been traced back to the district's Kanhaixuan residential community.

South Korea's medical associates called for stricter social distancing, and the government warned tougher measures would be needed if infections were not contained.

The Korea Disease Control and Prevention Agency reported 386 new COVID-19 cases on Friday, topping 300 for the fourth day in a row.

The Korean Society of Infectious Diseases and eight other medical societies warned the country could reach 1,000 daily cases in the next two weeks if the illness is not contained.

Mexico became the fourth country to pass 100,000 deaths from COVID-19. The country's number includes only test-confirmed deaths, meaning the actual toll is likely higher. A government study into excess mortality in October determined that about 140,000 deaths this year could likely be attributed to COVID-19.

Less than a week ago, Mexico reached 1 million confirmed infections. President Andres Manuel Lopez Obrador suggested Friday that criticism of the country's approach to the pandemic were political attacks.

"Why change?" asked Obrador. "Just because the ones who used to steal and loot don't like what we are doing, or don't like seeing us in power?"

Canadian Prime Minister Justin Trudeau said Friday that Canada's hospitals could be overwhelmed by a potential spike in COVID-19 cases as Toronto prepared to impose a lockdown.

"A normal Christmas is quite frankly right out of the question," said Trudeau.

Ontario Premier Doug Ford announced that Canada's largest city would enter a lockdown on Monday. All social gatherings will be banned, restaurants can only offer takeout and delivery services and most retail stores are permitted curbside pickup only. The measures will last for at least 28 days.

"The situation is extremely serious, and further action is required to avoid the worst-case scenario," Ford said.

Trudeau said he would not reintroduce a national shutdown like one that was imposed earlier this year. "I'm not looking to bring in a federal hammer to try and do things," he added.

"Don tested positive at the start of the week and has been quarantining out at his cabin since the result," said his spokesman, who added that Trump Jr. was asymptomatic.

Trump Jr. has downplayed the pandemic, as his father has done, and told Fox News last months that deaths from COVID-19 had fallen to "almost nothing."