Coronavirus digest: Johnson & Johnson applies for emergency approval in US

Johnson & Johnson has become the latest company to request emergency authorization for its vaccine in the US, hoping to produce 1 billion jabs this year. Follow DW for the latest. 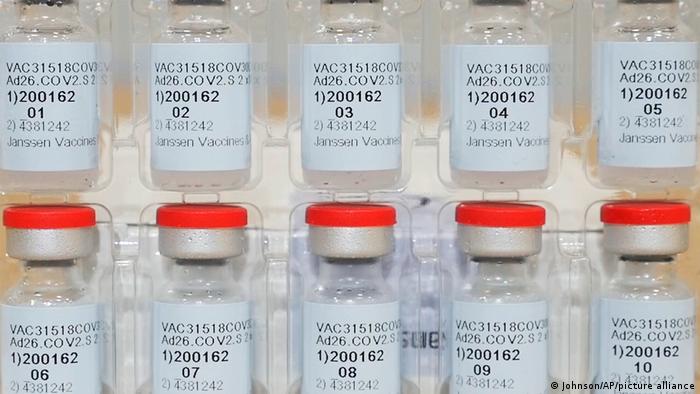 The Johnson & Johnson vaccine has several benefits over the alternatives, especially for poorer countries

The US drugs company Johnson & Johnson said on Thursday that it had submitted a request for emergency authorization of its one-shot vaccine to the US Food and Drug Administration (FDA).

The FDA's independent vaccine advisory board will meet on February 26 to make a decision on the vaccine's approval. Johnson & Johnson said that they would also request approval in Europe in a matter of weeks.

The most recent player to join a growing field of approved vaccines around the world has the benefit that it requires only one jab and does not need to be kept at super cool temperatures like the BioNTech-Pfizer and Moderna vaccines.

However, the company's recent report shows that the vaccine only has a 66% efficiency, significantly lower than some of the other vaccines on offer.

The Day: Questions over Astrazeneca vaccine

The Day: Questions over Astrazeneca vaccine

The UK government said on Friday that it had reached a deal with the German biotech firm CureVac to rapidly produce vaccines for COVID-19 mutations if it proved to be necessary. They also placed an order for 50 million doses of these potential vaccines.

Regulators also said the AstraZeneca coronavirus vaccine has been found to be effective against the British variant of the virus.

France has recorded four new cases of people infected with the new coronavirus variant first detected in Brazil. The French prime minister rejected the idea of taking the country back into lockdown.

Germany's Robert Koch Institute reported 12,908 new COVID-19 cases on Friday, over 1,000 fewer than the previous week. The number of deaths in the country increased by 855.

The country's top disease control official also warned on Friday that the new variants of COVID-19 had been discovered aross Germany and data has revealed that they are more dangerous than previously thought.

Researchers from Germany's Merseburg University have found that the sex lives of most Germans has not deteriorated during the coronavirus pandemic with some 30% of German women reporting having better sex.

The EU's foreign policy chief Josep Borrell said, following a meeting with the Russian foreign minister in Moscow, that he hoped the EU would approve the Russian Sputnik V vaccine to make up for supply shortages.

The head of the European Commission Ursula von der Leyen admitted to faults in the EU's vaccine procurement program in an interview on Thursday saying that the bloc should have put a greater focus on the challenges of mass production.

In Denmark, one in five new coronavirus infections in the final week of January came from the more contagious British variant, experts there said.

Poland said on Friday it will open up its hotels, cinemas and theaters as a trial from next week.

Prime Minister Mateusz Morawiecki said there is a "fragile stabilizilation" in coronavirus cases.

China recorded its lowest number of new cases in over a month on Friday less than a week before the Lunar New Year holiday kicks off.

Funerals and deaths in times of coronavirus

Funerals and deaths in times of coronavirus

Recent measures to crack down on the spread of the virus in northern regions of the country seem to have been successful as the infection rate subsides.

Authorities have been warning people not to travel or hold big parties for the new year festivities, worried about the possibilities of large outbreaks of the virus.

BioNTech-Pfizer withdrew its application for emergency authorization of its vaccine in India on Friday after meeting with officials from the country's drug regulator, Reuters has reported.

China also announced it would donate 100,000 doses to the Republic of Congo and forgive $13 million of debt.

New Zealand announced on Friday that it would open its borders to refugees once more almost a year after they closed to stop the spread of coronavirus.

The country planned to welcome 35 refugees in February with around 210 expected to arrive by June. All arrivals will be obliged to stay in a 14-day quarantine in government managed isolation facilities.

No kindergarten or school, no play dates or sports — the corona crisis has dramatic consequences for children.  Pediatricians observe deteriorating health conditions and a dramatic increase in behavioral disorders. Read the full story here.

An IP waiver by the WTO would have made it easier for developing countries to produce COVID-19 vaccines and drugs. Wealthy countries opposed the move, arguing that a suspension of patents would stifle innovation. Read the full story here.

Mexico is running short of oxygen for COVID-19 patients. With the country's health care system at its limit, many people are caring for their loved ones at home, but the demand for privately sourced oxygen has led to price-gouging. Watch the report below.