The Johnson & Johnson one-shot vaccine is next in line for authorization in the US. Meanwhile, Denmark and Switzerland are easing some restrictions. Follow DW for the latest. 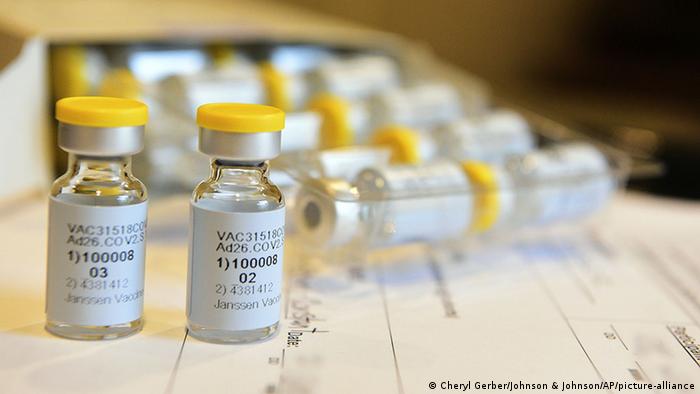 J&J can be stored at fridge temperature, rather than inaccessible freezers that Pfizer and Moderna shots require

The US Food and Drug Administration (FDA) announcement paves the way for an emergency use authorization for the single-shot vaccine, which an independent committee is set to discuss.

"The vaccine was effective in preventing COVID-19 using a less restrictive definition of the disease and for more severe disease, including COVID-19 requiring medical intervention, considering all cases starting 14 days after vaccination," the FDA document said.

J&J said last month that its vaccine was 66% effective in preventing moderate to severe COVID-19 infections, including the variants detected in South Africa and Brazil.

The one-shot jab could become the third vaccine the FDA approves as the US battles the pandemic that has so far killed more than 500,000 of its residents.

Meanwhile, American vaccine manufacturer Moderna said on Wednesday that the shots of its new coronavirus vaccine candidate targeting the South African strain of the virus has been sent to the US National Institutes of Health for testing.

"We look forward to beginning the clinical study of our variant booster and are grateful for the NIH's continued collaboration to combat this pandemic," CEO Stephane Bancel said.

The South African strain is counted among one of the more dangerous of the current mutations as it dodges some of the blocking action of antibodies that target the older COVID-19 strain.

As a result people who are infected with the older strain are more vulnerable to reinfection.

Also in a first, a mass real world study involving over half a million people has revealed that the Pfizer-BioNtech coronavirus vaccine is "extremely effective."

Germany has approved three at-home virus tests for use as part of Health Minister Jens Spahn's strategy for mass testing to help the country emerge from its current lockdown.

The Federal Institute for Drugs and Medical Devices, Germany's pharmaceutical regulator, approved the antigen tests, made by Healgen Scientific, Xiamen Boson Biotech and Hangzhou Laihe Biotech for use by people who are not medical professionals. Spahn told broadcaster ZDF earlier that further home test kits would be approved next week.

Germany has seen more than 2.4 million cases and nearly 69,000 deaths since the start of the pandemic. The infection rate stood at 59.3 cases per 100,000 people over the past seven days, compared with 57 a week earlier.

The infection rate fell steadily in the first weeks of the year but has stagnated in recent days. Chancellor Angela Merkel told lawmakers that making rapid tests more available and boosting testing capacity could make a return to normality more viable, sources present at the meeting told Reuters.

Non-essential shops and museums can reopen in Switzerland starting March 1.

"The initial reopening phase from March 1 essentially involves activities that allow people to wear masks and maintain social distancing, and that only involve small numbers of people or meeting outdoors," the government said in a statement.

The Swiss government is aiming to allow opening outdoor seating at restaurants, and a limited number of people can gather at sporting and cultural events by March 22.

Denmark is set to ease some shopping restrictions and allow schools in parts of the country to reopen on March 1. The country has seen general infection numbers drop substantially after introducing lockdown measures in December.

London's Heathrow airport saw a net loss of £2 billion (€2.3 billion) ($2.8 billion) last year, a result that "underlines the devastating impact of Covid-19 on aviation,” it said in a statement. The loss reflected a 73% decline in passenger numbers.

COVID-19: When to ease restrictions?

Finding a way out of lockdown

Sweden is set to ease restrictions on elderly residents of care homes who have been vaccinated against the virus. The country has seen a rise in cases in the last couple of weeks, sparking fears of a third wave of infections.

However, more than 80% of residents of care homes for the elderly have received their first vaccination, and 64% have completed a course of two shots, according to daily Dagens Nyheter.

Poland plans to limit traffic across its southern borders with the Czech Republic and Slovakia, and introduce tighter restrictions in some of its most affected regions, the country's health minister said, as the number of daily new infections exceeded 12,000 cases. The last time Poland recorded more than 10,000 cases in a day was in early January.

"We have a very dynamic growth from day to day and also compared to last week," said Health Minister Adam Niedzielski.

France is receiving enough doses of the vaccine to reach the government's target of vaccinating 15 million people by the end of June, Industry Minister Agnes Pannier-Runacher told LCI television. France, one of the European countries hardest-hit by the virus, has recorded more than 3.63 million cases and 85,000 deaths since the start of the pandemic.

Malaysia began its vaccination drive, with Prime Minister Muhyiddin Yassin receiving the first shot. The Southeast Asian nation has signed deals with several vaccine suppliers including Pfizer and AstraZeneca, and aims to vaccinate up to 80% of its 32 million people by next year. The country has recorded more than 288,000 cases and 1,000 deaths since the start of the pandemic.

The Philippines' health ministry said it will investigate the illegal use of unauthorized vaccines, after a presidential advisor admitted to receiving shots of a Sinopharm vaccine smuggled into the country.

"I got hold of vaccines from a friend who smuggled it into the country," celebrity radio and television host Ramon Tulfo told broadcaster One News. Several government officials have also received Sinopharm shots, he said, adding to speculation that the jabs were available on the black market. The Food and Drug Administration has not yet approved the use of the Sinopharm vaccine, making its import and distribution illegal.

Hong Kong will introduce HK$120 billion (€12.7 billion) ($15.5 billion) in fiscal measures to revitalize the pandemic-hit economy. The measures include tax relief, loans for the unemployed and consumption vouchers.

The two sides of coronavirus vaccination