Health authorities in India have celebrated a successful launch of the world's largest vaccination program, with 190,000 jabs given in one day. Follow DW for the latest. 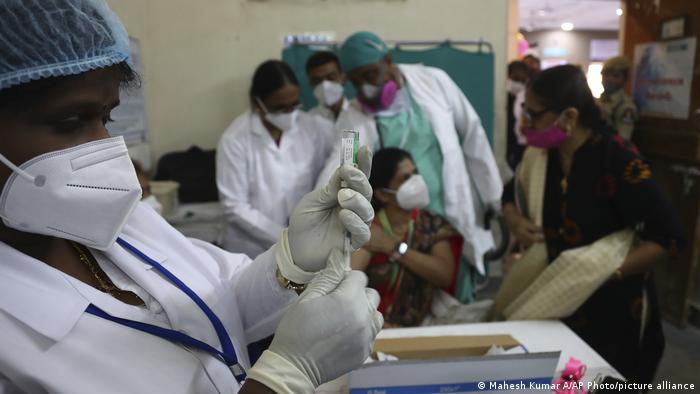 India's Health Ministry hailed a successful first day of the world's largest vaccination program, which was launched on Saturday.

More than 190,000 people received their first jabs and nobody was hospitalized with negative reactions to the vaccine.

Although authorities had hoped to vaccinate 300,000 people on the first day, a glitch in the app being used to coordinate and monitor the process led to some recipients not being alerted.

Front line health workers and people aged over 50, as well as those deemed at high risk are first in line to receive a jab from one of the two authorized vaccines — the Oxford University-AstraZeneca Covishield vaccine and the Indian-produced Covaxin.

Concerns over Covaxin, which has not yet completed phase 3 trials, have led to doctors requesting only Covishield doses to encourage uptake.

The country plans to immunize 300 million out of the 1.3 billion-strong population by July.

Pakistan's drug regulatory authority approved the use of the AstraZeneca Covishield vaccine and hopes to launch its immunization program against the virus in the first quarter of the year.

Pakistan has a strained relationship with India, the major producer of the vaccine. The Chinese vaccine developer CanSino is carrying out clinical trials in Pakistan.

China has finished the construction of a 1,500-bed hospital, built to help in the fight against a recent outbreak of the virus in the northeast of the country.

Chinese authorities also claimed to have found COVID-19 on ice cream produced in China with ingredients imported from New Zealand and Ukraine. There were no reported cases of people having contracted the virus from the ice cream, but authorities were chasing down some 390 units that had been sold.

Lebanon's caretaker government secured a deal for 2.1 million doses of the BioNTech-Pfizer vaccine which will start arriving in batches from February.

The country was also negotiating with the private sector to aquire doses of the AstraZeneca and Sinopharm vaccines.

The eastern Mediterranean country has been under a strict lockdown after relaxed measures over Christmas and New Year's lead to a spike in cases.

Oman will close its land borders for one week in order to battle the spread of coronavirus, with the possibility to extend the measures if necessary.

Some 47 tennis players, including Grand Slam champions, went into hard quarantine after arriving in Australia for the Australian Open. Four cases were identified on charter flights transporting players and staff for the event.

Some of the players have protested against being classified as "close contacts" with those who tested positive after being on the same flight.

The British government hopes to start phasing out its national lockdown by March if it manages to meet its vaccination targets, Foreign Secretary Dominic Raab told Sky News on Sunday.

Austria has said it will extend its lockdown by a further two weeks, allowing restrictions to ease from February 8.

All but essential shops are closed in the country, but health officials deem the infection rate to be too high for lockdown measures to end yet.

The country has had some 390,000 coronavirus cases and almost 7,000 deaths linked to the disease.