India has seen its most deadly day of the pandemic so far as complaints mount about the country's vaccination program. In Germany, case numbers show a slight downward trend. See DW for the latest. 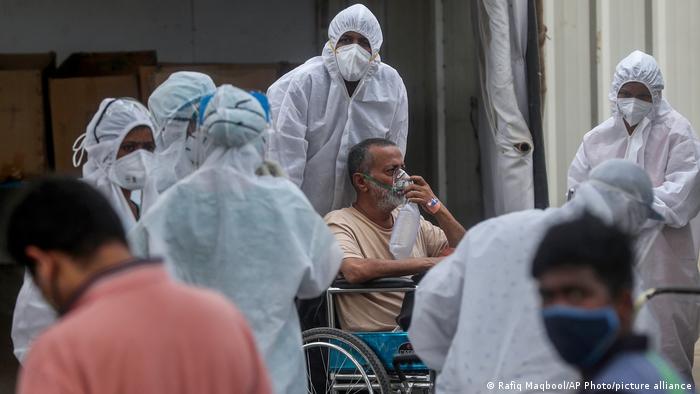 Health Ministry data showed there were 379,257 new COVID-19 cases and 3,645 new deaths on Thursday — making it the deadliest day so far for the country in the pandemic.

The figures came as the government rejected the notion that its vaccine campaign was floundering.

The country — one of the world's largest producers of vaccines — on Wednesday opened registrations for everyone above the age of 18 to be given shots from Saturday.

However, despite its production capacity, India doesn't have enough stocks for the 600 million people who would be eligible.

Social media was flooded with complaints the registration app had crashed due to high use and that there were no available appointments when it did work.

The pandemic has killed some 3.1 million people around the world, with more than 200,000 fatalities in India alone. In many Indian cities, hospitals are running out of beds, medicines and oxygen cylinders.

The US on Wednesday announced it was sending more than $100 million in supplies. A US military flight carrying 960,000 rapid tests and 100,000 face masks was due to arrive on Thursday.

Here is the latest coronavirus-related news from around the world.

For the first time since the start of Germany's vaccine rollout, over 1 million doses were administered in a single day, Health Minister Jens Spahn announced. After a sluggish and much-criticized start, the country's national vaccine campaign is starting to pick up pace.

The seven-day average of coronavirus cases fell on Thursday, for the third day in succession, to 155 per 100,000 people.

Data from the Robert Koch Institute (RKI) for infectious diseases showed the incidence figure, which the German government uses to determine lockdown policies was 169 on Monday. However, it has fallen on each day since then.

In vaccine news, German pharmaceutical and chemicals giant Merck said it has expanded production to help BioNTech and Pfizer create more jabs. Merck supplies lipids, which are a key component in the BioNTech-Pfizer vaccine.

President Recep Tayyip Erdogan announced the closure of all businesses — except those deemed exempt by the Interior Ministry. However, the country's tourism minister assured foreign visitors that they are exempt from all restrictions.

"Our most visited and important museums and archaeological sites will remain open," Mehmet Nuri Ersoy said.

The pandemic situation in many African countries is threatening to worsen, the World Health Organization (WHO) warned on Thursday.

In nearly half the countries on the African continent, there's a high risk that the coronavirus could quickly spread and lead to a wave of new infections, WHO regional director Matshidiso Moeti said.

She warned that countries in Africa could see a similar devastating crisis like the one in India if governments and the public feel a false sense of security.

The Philippines is extending an existing lockdown in metropolitan Manila and four neighboring provinces – an area taking in some 25 million people. Although the cases have been easing off, numbers remain alarming.

The length of a curfew in Manila was shortened from 9 to 6 hours to help struggling businesses hit by the measure.

Filipino hospitals on the brink

Pandemic puts hospitals in the Philippines on the brink

In Nepal's capital Kathmandu and most other major towns and cities in the country, authorities imposed a 15-day lockdown because of spiking cases of COVID-19.

Offices and markets were closed and police have imposed roadblocks, with vehicles no longer allowed to be driven on the streets.

Blood tests in Mexico indicate that as many as a third of people there had been exposed to COVID-19 by the end of 2020.

Antibodies were found in about 33.5% of samples from blood banks and tests that were unrelated to COVID-19.

Levels varied significantly according to region, with areas along the US border generally having higher rates.

With almost 350,000 virus-related deaths in Mexico, and about 40 million Mexicans apparently having been infected, authorities say the mortality rate could be just under 1%.

Mexico developing its own vaccine

Mexico works to develop its own vaccine

Research in the United States has shown that the COVID-19 virus is more likely to infect the placenta, potentially passing the disease from mother to fetus, early in pregnancy.

Analysis of 12 placentas from healthy women, ranging in gestational age from 5 weeks to 36 weeks, researchers found infected cells had the surface protein ACE2, which the virus uses as a gateway for entry.

Late in pregnancy, the ACE2 proteins are positioned on cells in such a way that they are not exposed to the virus circulating in the mother's blood, according to study co-author Dr. Drucilla Roberts of the Massachusetts General Hospital in Boston.

US pharmaceutical company Moderna has said it plans to increase global production of its COVID-19 vaccine to up to three billion doses in 2022.

The firm said in a statement that it would make new funding commitments to manufacturing facilities in Europe and the United States.

Germany: Will Merkel's legacy be a COVID mess?

After 16 years in power, Angela Merkel is nearing the end of her final term as chancellor. Germany is struggling to get the pandemic under control. A senior member of her party tells DW the country will be in good hands.