The Robert Koch Institute reported another new daily record of infections in Germany, while Hong Kong banned travelers from over 150 countries ahead of the Beijing Olympics. DW has the latest. 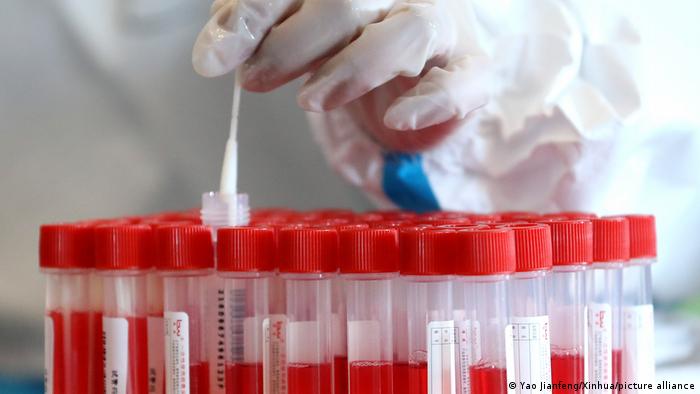 This means that the seven-day incidence rate has risen from Thursday's 427.7 to Friday's rate of 470.6. The figure indicates how many people per 100,000 people were infected during the past seven days.

There were 286 deaths recorded, bringing the total number of reported deaths in the country to 115,337.

The RKI said the omicron variant continues to spread rapidly and accounts for 73 percent of newly detected cases.

According to RKI figures on January 14 last year, there were more than 1,244 deaths recorded while the seven-day incidence stood at 151 cases per 100,000 people.

"She is following the current recommendations and will perform her duties from home. The PM is feeling well, given the situation," the prime minister's spokesperson said.

Andersson is among several party leaders who have tested positive for the virus. The country is seeing high new caseloads of around 25,000 infections per day.

Sweden's royal family has also been hit, with the king, queen and crown princess having been infected.

The Netherlands eased some coronavirus restrictions on Friday, allowing universities and some non-essential shops to open for the first time in weeks, but kept bars, restaurants and theaters closed.

The lockdown was introduced in mid-December to ease the strain on health services. Cases have been rising in the country due to the omicron variant, but hospitalizations have continued to fall.

Some bars and restaurants in one Dutch town opened on Friday in protest with more planning to open on Saturday.

Most of the Polish government's medical advisors resigned en masse on Friday, saying that their recommendations had a "lack of influence" on government policy.

In a letter to Prime Minister Mateusz Morawiecki, 13 of the 17 expert virologists, epidemiologists, and intensive care specialists quit. They referred to a "growing tolerance for groups that deny the threat of Covid-19 and the importance of vaccination in the fight against the pandemic."

The right-wing ruling Law and Justice party has avoided introducing strict measures to contain the spread of the virus despite a vaccination rate of around just 56%.

Italy's police union has expressed dissatisfaction after officers were sent batches of pink protective masks to wear while on duty. The union said it felt the masks could harm the reputation of police officials.

"We do not understand the reason behind the purchase of masks in a color that would appear at first sight to be unsuitable for our administration," the police union said in a letter to the Interior Ministry.

The union said that in the future, masks should be black, white or blue.

Spain's Health Ministry said the number of recorded COVID infections in the country since the beginning of the pandemic topped 8 million. In recent weeks, the country of 47 million inhabitants has seen a surge in cases, triggered by the dominant omicron variant. However, hospital occupancy rates barely increased in recent days.

Thousands of pilgrims in India bathed in the Ganges on Friday as part of the Hindu Makar Sankranti festival. Authorities, fearful of a super-spreader event implemented protocols, such as requiring proof of vaccination and a negative test.

China has ramped up anti-COVID-19 measures in Beijing and elsewhere in the country. That's as clusters of infections continue in the buildup to the Winter Olympics.

Mass testing has been taking place in the port city of Tianjin, where 126 infections were detected, some with the omicron variant.  Authorities have ordered a third round of testing of the city of 14 million people.

Authorities in Hong Kong on Friday instituted a ban on travelers from more than 150 nations from transiting through the territory's airport.

The move comes as China heightens restrictions ahead of the Olympics in two weeks.

Hong Kong has had a number of stringent measures in place since the global pandemic began. These include lengthy quarantine periods, lockdowns and mass testing.

South Africa's health research authority has reported that Johnson and Johnson's vaccine booster is 85% effective in protecting against hospitalization for the omicron variant. This protection was found to last for one to two months after being vaccinated.

"We are very happy to report very high levels of vaccine effectiveness against Omicron," Gray added.

Brazil started vaccinating children against COVID on Friday, after weeks of delay. Some 15 children received the jab.

Brazil's health regulator had approved the BioNTech shot for children, but the federal government's reluctance to endorse the vaccination of children delayed the effort.