The interior minister is the latest in Chancellor Merkel's Cabinet to become infected. Japan is struggling to contain a surge in COVID-19 cases with the Olympics just over 10 weeks away. Follow DW for the latest. 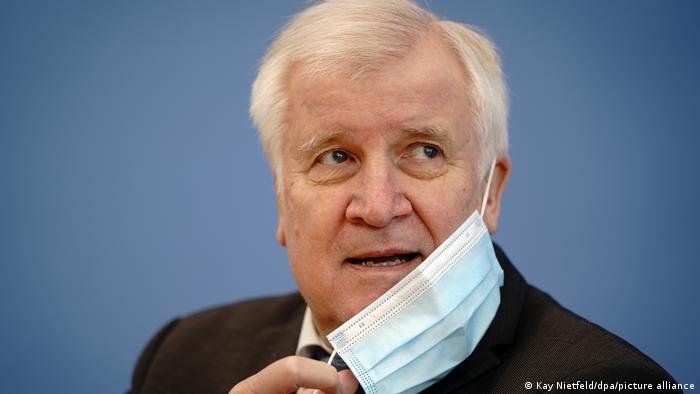 The 71-year-old minister is isolating at home and is not yet experiencing any symptoms.

The vaccine was earlier restricted to those above the age of 60, but with the majority of that group expected to be vaccinated by June, the government decided not to restrict the jabs to older people.

Younger people can get the vaccine — which, like AstraZeneca, can lead to very rare side effects — after consulting their doctor, Spahn said after a meeting with the health ministers of the federal states in Berlin.

Germany confirmed 6,922 new coronavirus cases in the past 24 hours, taking the total number of infections to 3,527,251, data from the Robert Koch Institute (RKI) for infectious diseases showed on Monday.

British Prime Minister Boris Johnson will announce the easing of restrictions in England on Monday, as daily infections and deaths have dropped sharply, aided by one of the fastest vaccine rollouts in the world.

Measures — effective from May 17 — will include the reopening of indoor seating in pubs and restaurants.

People should also be able to meet in groups of up to 30 outdoors, while six people or two households can meet indoors.

The easing of restrictions will apply to England only, with the devolved governments of Scotland, Northern Ireland, and Wales setting out their own rules.

Norway's government-appointed commission on Monday recommended excluding the COVID-19 vaccines made by AstraZeneca and Johnson & Johnson in its inoculation program due to a risk of rare but harmful side-effects.

However, it added that those who would volunteer to take either of the two vaccines should be allowed to do so.

The Norwegian Institute of Public Health said last month that the AstraZeneca vaccine should be dropped entirely but the government instead sought further advice — including on the jabs made by J&J, which the country has yet to adopt.

Cyprus will exit a third partial lockdown on Monday with a new coronavirus "safety pass" system to allow people to move freely.

The Indian coronavirus variant has been described by the World Health Organization as a "variant of interest," suggesting it could spread more rapidly, cause more disease, or even evade vaccine immunity.

Meanwhile, French Finance Minister Bruno Le Maire said the economy will return to its pre-COVID-19 economic levels by the first half of 2022.

He also told France Info radio that he was sticking to his forecast of 5% Gross Domestic Product (GDP) growth for 2021 for France.

Japan's state of emergency was extended last Friday until May 31. Bach's visit may not happen until June, according to the local TV station Fuji News Network.

"In the light of the extension of the state of emergency last week and various circumstances we are facing, the visit of IOC President Bach to Japan scheduled for 17 and 18 May has been postponed," Tokyo 2020 said in a statement.

"We will continue to monitor the COVID-19 situation in Japan and other relevant factors and will rearrange his visit to Japan as soon as possible."

Thomas Bach, IOC President: Safety of all participants and the Japanese people is first priority

Japanese Prime Minister Yoshihide Suga said that he has never "put the Olympics first," on a day when an opinion poll showed nearly 60% of people in the country want the Olympics canceled.

The Summer Games were scheduled to begin in less than three months.

"My priority has been to protect the lives and health of the Japanese population. We must first prevent the spread of the virus," Suga told a parliamentary committee meeting when asked if the Games will continue despite the COVID-19 infections spike.

India saw a significant drop in the number of daily coronavirus infections on Monday, reporting 366,161 new cases in the past 24 hours after logging more than 400,000 cases for four straight days.

However, experts attribute the decrease in cases to the relatively lower testing over the weekend.

The number of COVID-19-related deaths was 3,754 in the past 24 hours, according to the country's Health Ministry. This was also a decline, after 4,000 deaths a day for two consecutive days. The overall death toll now stands at 246,116.

Meanwhile, calls to impose a nationwide lockdown grew in the country, increasing pressure on the Narendra Modi government.

German vaccine maker BioNTech said Monday it would build a southeast Asia headquarters and manufacturing site in Singapore that could produce hundreds of millions of doses of vaccines per year that are based on its mRNA technology.

Construction of the manufacturing plant and a regional headquarters in Singapore will start this year, and the site could become operational by 2023, the company said in a statement.

Australia has started administering COVID-19 vaccines to athletes around the country to give them "comfort and certainty" for their final preparations for the Tokyo Olympics.

The country has been relatively slow to roll out vaccines to the general population, but Olympic and Paralympic athletes have been allowed to jump the queue before they travel to the Games, set to run from July 23 to August 8.

South African President Cyril Ramaphosa said that if wealthy nations refused to share COVID-19 vaccines with less fortunate parts of the world, that would amount to "vaccine apartheid."

Ramaphosa said South Africans should support a waiver on intellectual property rights for vaccines and medicines at the World Trade Organization (WTO), an idea backed by US President Joe Biden. Ramaphosa called a waiver a "global public good."

"It is about affirming our commitment to the advancement of equality and human rights, not just in our own country but around the world," said Ramaphosa in a weekly newsletter.

Sudan's healthcare system has struggled to keep up in a third wave of infections. Residents have taken to social media with pleas for help in looking for hosptial beds, medicine and oxygen.

Officials say that there are about 300 ventilators available in the country of over 40 million people. A government study found 38% of oxygen cylinders have been smuggled out of the health system for patients to use at home.

Last month, officials said the country could meet just 40% of its need for medicine. Sudan has recorded 33,000 cases and over 2,600 deaths since the beginning of the pandemic, but those numbers are likely much higher due to the low rates of testing.

The United Arab Emirates will bar entry to non-resident travellers from Bangladesh, Pakistan, Nepal and Sri Lanka starting on Wednesday. That includes transit flights, according to a statement by the Gulf state's National Emergency Crisis and Disasters Management Authority.

US-based Inovio Pharmaceuticals said its COVID-19 vaccine candidate was safe and produced immune responses against the virus in all the tested age groups. The trial included about 400 adult participants at 16 sites across the US.

The company plans to file preliminary mid-stage results with the US Food and Drug Administration (FDA).

BioNTech said that it is expected to deliver 1.8 billion doses of its COVID-19 vaccine by the end of this year, up 400 million doses from what was announced in March. The company posted a net profit of €1.13 billion($1.37 billion) in the first quarter of 2021, more than 70 times the figure for the same quarter last year.

The German firm also said that the vaccine it developed with Pfizer does not need any modifications or boosters at the moment to protect against variants.

"To date, there is no evidence that an adaptation of BioNTech's current COVID-19 vaccine against key identified emerging variants is necessary.," said the company in a statement.

Opinion: COVID vaccine patents are not the issue

US President Joe Biden's push to waive COVID-19 vaccine patents has led to mixed responses in Europe. This discussion, however, will not lead to more vaccines. It is just misleading, writes Bernd Riegert.

Pandemic woes: which cultural events can we look forward to in 2021?