Germany will have to make tough decisions on who gets the coronavirus vaccine first, Health Minister Jens Spahn has warned. Several COVID patients died in Pakistan after hospitals ran out of oxygen. Follow DW for more. 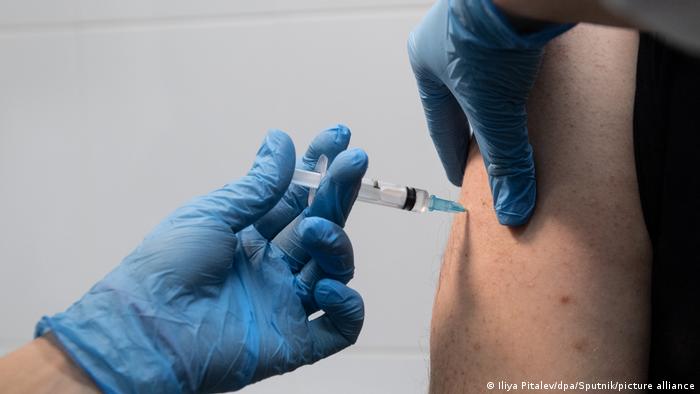 A medical worker gives a COVID shot to a patient

In Germany, Health Minister Jens Spahn has warned that the rollout of coronavirus vaccinations will lead to squabbles over who gets inoculated first.

Spahn told an online forum in Berlin that the number of doses will be limited in the first few months. He estimated that there would be 3 million doses in January, but there would be tens of millions of people who want to be inoculated.

He said there would be tough decisions about who will be prioritized. The government has already said that health workers, the elderly and those at high risk of severe complications from COVID-19 will get the first doses.

Spahn added that he expects the situation to ease within a few months. From the summer, he said, it would be possible to carry out vaccinations in doctors' clinics. If as many people as possible get vaccinated, the country could be out of the woods by the fall of 2021, he added.

Meanwhile, the country's coronavirus app has so far warned more than 1.5 million people of a possible infection.
Minister in the Chancellory Helge Braun told the newspaper Welt am Sonntag that the app has done "exactly what it should."

The app records contacts between strangers who would otherwise not be warned of their risk of infection.

"So far, over 100,000 users have shared a positive coronavirus test in the app," Braun said. With an average of 15 relevant contacts per user, that would be more than 1.5 million people who have been warned to date.

Braun told the newspaper that the German app was better than those in Asia, which are less accurate and have sent people into quarantine unnecessarily.

He said the advantage of the German app is the connection to testing laboratories. If the test results are positive, the users are informed immediately.

Britain is gearing up to be the first country in the world to roll out the BioNTech-Pfizer coronavirus vaccine, with the first shots set to be administered on Tuesday.

The vaccine will first be made available at hospitals, before being distributed to doctor’s clinics, the government said on Sunday.

People over the age of 80, frontline workers and residents, and staff of care homes are on top of the priority list for the dosage.

According to the authorities, more than 1,000 vaccination centers will operate across the country under groups of local doctors.

The head of Britain's medicines regulator has played down concerns that the roll out of the COVID-19 vaccine could be disrupted if Britain and the European Union fail to reach a trade deal before the end of the Brexit transition period on December 31.

"We've practiced, we are ready, we are fully prepared for any possible outcome," June Raine, head of the Medicines and Healthcare products Regulatory Agency (MHRA), told the BBC.

Queen Elizabeth II and her husband Prince Philip could receive the vaccine within weeks, according to the Daily Mail newspaper. The report added that the two royals will not receive preferential treatment and were in line to get the shot early due to their age.

The improving situation in France also continued its general trend on Saturday with a further fall in the number of COVID-19 hospital deaths. Hospital admissions also fell, although the total still numbered in the tens of thousands. A little over 26,000 people were in French hospitals on Saturday due to COVID-19 problems.

Demand is high despite health officials remaining tight-lipped on how well they work or how they may reach the country's 1.4 billion people.

More than a million health care workers and others who are deemed at high risk of infection have already received the vaccines under emergency use permission. There has been no word on possible side effects.

The country's fledgling pharmaceutical industry has at least five vaccines from four producers being tested in more than a dozen countries including Russia, Egypt and Mexico.

One developer, China National Pharmaceutical Group, known as Sinopharm, said in November it had applied for final market approval for use of its vaccine

The companies are using more traditional techniques than Western developers so the vaccines can be stored at 2 to 8 Celcius (36 to 46 Fahrenheit).

Hospitals in Pakistan are struggling to cope with overwhelming numbers of COVID-19 cases.

"We are in a critical situation which is worsening every day," Sajjad Qaisar, secretary-general of the Pakistan Medical Association, told dpa.

Qaisar said hospitals have been filled up by seriously ill patients, and there is a dearth of ventilators and sometimes a shortage of oxygen cylinders.

At least seven patients died on Saturday in a public hospital in the north-western city of Peshawar when doctors ran out of oxygen to treat them. The provincial government has launched an inquiry.

New infections are steadily increasing in Pakistan; more than 3,000 new cases have been reported daily since December 2.

Indonesia's social affairs minister has been arrested for allegedly taking $1.2 million ($990,000) in bribes linked to food aid for those hit by the coronavirus pandemic.

Juliari Batubara was named as a suspect after Indonesian anti-corruption agents seized suitcases, backpacks and envelopes stuffed with cash in a sting operation on Saturday.

Officials have alleged that he received the money from two contractors that were appointed to supply basic food packages for those whose incomes dried up.

Batubara turned himself in on Sunday at the anti-corruption agency's headquarters, becoming the second minister in President Joko Widodo's government to be arrested over alleged graft in recent weeks.

South Korea has raised its coronavirus alert to the second-highest level in Seoul and surrounding areas as authorities struggle to contain a fresh outbreak.

In recent weeks, new infections have jumped from around 100 a day to more than 500.

In the capital, all gatherings of more than 50 people will be banned and professional sports will be held behind closed doors with no spectators. Cafes will continue to serve only takeaways, while restaurants must close by 9 p.m., with only deliveries permitted afterward.

The country was previously held up as a model of how to combat the virus, due to its test and trace program. The public has largely followed social distancing and other rules, such as wearing face masks.

Australia's Victoria state eased its coronavirus restrictions on Sunday after recording no new cases of infections for 37 days straight.

With new relaxations, the limit for people attending social gatherings has been increased to 100. The density rules of one person per two square meters will continue to apply.

Masks will still be mandatory in indoor venues and on public transport.

Victoria's Premier Daniel Andrews said 50% of office workers are expected to return to workplaces by January 11.

Hundreds of thousands of pupils in Israel have returned to junior high schools for the first time in more than two months, as part of the easing of the second lockdown.

Seventh to tenth graders became the last students to stay at home after Israel on September 18 became the first Western country to impose a second nationwide lockdown.

After being criticized for easing the first March-May curbs too quickly, Prime Minister Benjamin Netanyahu tried to avoid making the same mistake by lifting the second lockdown in stages, starting the process on October 18.

But numbers of daily infections have gone up again nonetheless, on Sunday crossing the 1,500 mark for the first time in weeks, and prompting officials to warn of an imminent third lockdown.

Dozens of people attended the lighting of the Christmas tree in Bethlehem — believed by many to be the birthplace of Jesus — in the Palestinian territories on Saturday.

In normal times, thousands of tourists regularly take part in the event, bringing a much-needed economic boost to the area. Due to coronavirus restrictions, the vast majority were obliged to view the ceremony online.