Brussels has urged Ireland to consider easing restrictions that require many EU travelers to enter a minimum 10-day hotel quarantine. Doubts are growing over whether the Olympics can be held in Tokyo. DW has the latest. 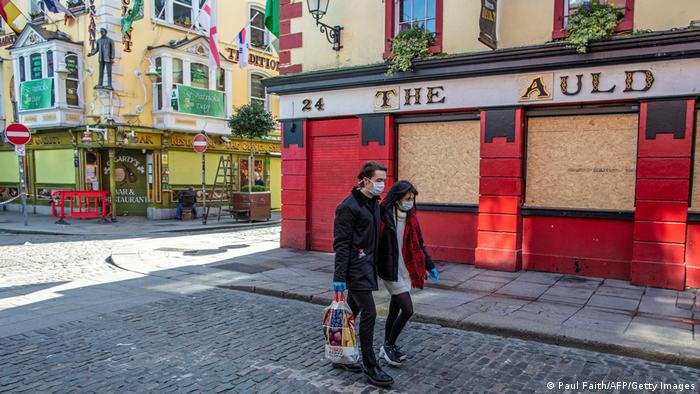 The European Commission on Friday sent a letter to Ireland, voicing concern about a mandatory hotel quarantine regime for coronavirus for travelers from some member states.

Five EU countries — Austria, Belgium, France, Italy and Luxembourg — are on a list of countries from which travelers must pay almost 2,000 euros to quarantine for up to 14 days in secure hotels.

Spokesman Christian Wigand told journalists the issue raised "concerns" under principles of EU law when it came to proportionality and non-discrimination amid the pandemic.

"The commission believes that the objective pursued by Ireland, which is the protection of public health during the pandemic, could be achieved by less restrictive measures," Wigand said.

The letter asked for "clarifications on this matter and on the criteria used to determine the designated countries," Wigand said. He added that Ireland had 10 days to respond to the letter.

The five EU countries are among 71 nations that are on the list.

In March, the European Commission sent similar letters to six other EU countries querying COVID-19 related travel restrictions. It has yet to start an infringement process against any one of them on the issue.

Here's a roundup of some other major COVID-related stories around the world.

The Robert Koch Institute in Germany on Friday reported 25,831 new cases of coronavirus infections and 247 deaths. It marks a rise from last Friday, albeit partly because of decreased testing over the Easter weekend in Germany. The seven-day incidence rate stood at 160.1 cases per 100,000 people.

Doctors in Germany warn: time is running out

Chancellor Angela Merkel has urged parliament to pass a bill that would mandate a nationwide "emergency brake" when the spread of COVID-19 becomes too rapid.

Merkel said it was necessary to stop the health care system from becoming overwhelmed. "The situation is serious, very serious, and we need to take it seriously," she told lawmakers.

Passing the bill could be a struggle for Merkel, with state governments reluctant to cede authority to the central federal government. The measures would need to be passed by the state-run upper house of parliament as well as the lower house to be implemented.

Merkel made her plea on the same day she was vaccinated with the AstraZeneca vaccine.

The German vaccine producer IDT Biologika says it plans to make some 10 million doses of the coronavirus shot developed by AstraZeneca this year.

IDT Biologika and AstraZeneca previously announced they would expand production at a plant in the German town of Dessau by the end of 2022.

IDT makes vaccines for a number of pharmaceutical companies. In March, the company said it would make the single-dose COVID-19 shot developed by Johnson & Johnson.

Austria plans a slow reopening from May under strict hygiene measures, after months of pandemic-imposed closures that shuttered restaurants, cafes, hotels and leisure facilities.

Chancellor Sebastian Kurz said the first steps towards a reopening of tourism, gastronomy, cultural and sports sectors would be possible from next month.

While he did not give precise dates, he said detailed planning was scheduled for next week. "Freedom is within reach," Kurz said.

Italy has also said it plans to ease COVID-19 restrictions, setting out a broad timetable for reopening after pressure from parties within his administration.

"The government is taking a reasonable risk based on data that is improving, although not dramatically," Draghi told a news conference.

From April 26, restaurants and bars tables in the regions with low infection levels will be able to serve clients at outside tables. Outdoor theatres and cinemas will also reopen in those areas.

"Our idea is to allow open-air swimming pools from May 15 and restart some gym activities on June 1," Health Minister Roberto Speranza told reporters.

Denmark on Friday advanced its reopening plan on the back of stable infection rates. The country avoided a third wave after imposing wide lockdown measures in December.

Starting April 21, indoor serving at restaurants and bars can open and some football fans will be able cheer from the stands, weeks earlier than originally planned.

Poland's Health Minister Adam Niedzielski said on Friday daily coronavirus cases will likely fall in coming days and that the country seems to have passed the worst in hospitals too.

"Today we should have a more optimistic day. We will see significant falls, even by 10,000 compared to last week," Niedzielski told public radio.

The United States is preparing for the possibility that a booster shot will be needed between nine to 12 months after people are initially vaccinated against COVID-19, a White House official said on Thursday.

While the duration of immunity after vaccination is being studied, booster vaccines could be needed, David Kessler, chief science officer for President Joe Biden's COVID-19 response task force told a congressional committee meeting.

Brazil's hospitals are running out of drugs needed to sedate COVID-19 patients. The government is urgently seeking to import supplies amid reports of the seriously ill being tied down and intubated without effective sedatives.

Brazil has the most COVID-19 related worldwide, with South America's largest country reporting another 3,560 deaths on Thursday.

China has reported record economic growth of 18.3% in the first three months of 2021 relative to the first quarter of last year, indicating that the country’s economy has largely overcome the crisis brought on by the pandemic.

The new data, released Friday, marks the biggest jump in the world's second-largest economy since it first began quarterly evaluations, nearly 30 years ago.

India's tally of total infections is second only to the United States, with experts blaming everything from official complacency to aggressive variants. The government has blamed failure to practise physical distancing.

Data from the health ministry on Friday reported a record daily increase of 217,353 COVID-19 infections over the last 24 hours.

Japan could expand quasi-emergency restrictions to 10 regions on Friday, with caseload rising amid a fourth wave of the virus.

A final decision on the measures is expected to be announced by Friday afternoon.

Economy Minister Yasutoshi Nishimura told the media that deliberations are underway on adding Aichi, Kanagawa, Saitama, and Chiba to six other prefectures, including Tokyo, already under the restrictions.

Iran has reached an agreement with Russia to purchase 60 million doses of the Sputnik V coronavirus jab.

The state-run IRNA news agency on Thursday quoted Iran's ambassador to Russia, Kazem Jalali, as saying the deal has been "signed and finalized'' for enough doses to inoculate 30 million people.

Iran is in the middle of a 10-day lockdown that began on Saturday in attempts to quell a fourth wave of COVID-19.

Chris Moy, vice president of the Australian Medical Association, on Friday warned people to not jump to conclusions on the death of a woman, reportedly from blood clots, days after she received the AstraZeneca COVID-19 vaccine.

He urged that the media should be more careful when reporting on blood clots and "should not play doctor" — as discussions on unconfirmed vaccine side effects, with no proper context, could hamper public confidence.

Toshihiro Nikai, the long-serving secretary general of Japan's ruling Liberal Democratic party, said the Games could be axed, according to reports from Japan.