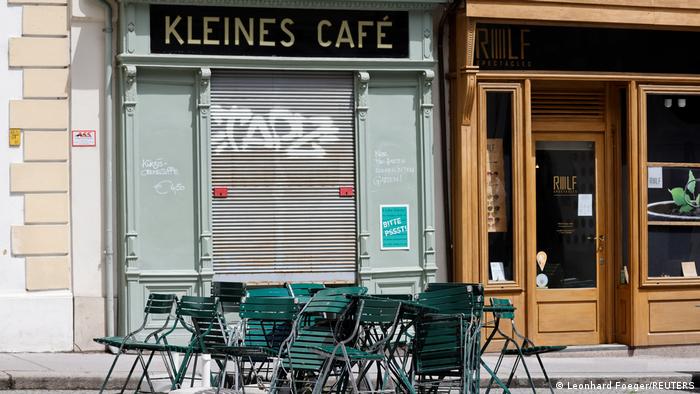 Austria is set to restrict entry to many public places for anyone not fully vaccinated against the coronavirus.

Under new rules that go into effect nationwide on Monday, those who cannot provide proof of full vaccination will not be allowed to enter places like restaurants, bars and hairdressers.

Unvaccinated people will also be barred from hotels, events with more than 25 people and ski lifts.

The latest restrictions come as Austria reported a near-record 9,388 cases on Friday.

"We're going to have to tighten the reins on the unvaccinated," Austrian Chancellor Alexander Schallenberg said as he introduced the measures on Friday, calling the current spread of the virus "exceptional."

"The occupancies of intensive-care beds are increasing significantly faster than we had expected," he added.

While close to 64% of Austria's population is fully vaccinated, it is one of the lowest rates in Western Europe.

Authorities are implementing a four-week transition period during which proof of a first vaccination plus a PCR test will permit entry to buildings and events.

Germany has reported 34,002 new COVID-19 cases over the past 24 hours, taking the total tally to 4,743,490, according to data from the Robert Koch Institute for infectious diseases. With 142 deaths reported in the latest single-day period, the death toll has risen to 96,488.

Officials cite Russia's low vaccination rate as a major factor in the surge in infections that began in mid-September.

Ukraine, which has seen seen a spike in infections in recent weeks, has recorded a one-day record of 793 deaths from COVID-19.

The Health Ministry said 25,063 new infections had been reported over the past day; a record 27,377 were reported on Thursday.

Only 17.9% of Ukraine's 41 million people have been fully vaccinated, the second-lowest rate in Europe after Armenia.

France reported 90,988 coronavirus deaths in hospital on Saturday, up by 25. The country also recorded 1,099 patients in COVID intensive care units — up by 10.

Costa Rica has announced that COVID-19 vaccines will be mandatory for all minors under the age of 18 in the country.

In Costa Rica, 73% of adolescents between the ages of 12 and 19 have already received at least one dose of a vaccine. Overall, about 54% of the population is fully vaccinated.

Costa Rica aims to start vaccinating children under 12 in the coming year, and has a deal to acquire over 3 million doses of the BioNTech-Pfizer vaccine.

Eleven patients have died after a fire broke out in a hospital's COVID-19 ward in the west Indian city of Ahmednagar, police reported.

There were 17 patients in the ward where the blaze started, the remaining six patients are in stable condition, police said, adding that the cause was not immediately clear and that they would conduct an investigation.

Pfizer announced on Friday that trial results showed the antiviral pill reduced by 89% the risk of hospitalization or death in patients at high risk of severe illness within three days of the onset of COVID-19 symptoms.

"COVID-19 has been tough on families and has contributed to the increase in the cost of living," a government statement quoted Ardern as saying.

"Increasing support for low- and middle-income families to help cover the basics is the fair thing to do."

Australia has reached its 80% full vaccination target for all people over the age of 16, Prime Minister Scott Morrison announced on Saturday.

Morrison called the vaccination rate a "magnificent milestone" on Australia's path to becoming one of the world's most vaccinated countries against COVID-19.

"That means we overcame all the challenges that we had with supplies. And we pushed through and we've got it sorted," he said on Friday.

"Australia is recovering and is emerging from this pandemic."

While vaccinations in Australia remain voluntary at the federal level, states and territories have introduced restrictions barring unvaccinated people from activities such as dining out or concerts.

COVID: Germany to offer booster shots for all

The health minister has delivered a stark warning as the country's public health institute published its highest-ever infection rates for the second day running.

Europe needs a "radical" shutdown, including industry and schools, to bring coronavirus infections down to zero, say petitioners in Germany and Austria.