Coronavirus: Delhi takes emergency measures amid ′third wave′ | Asia | An in-depth look at news from across the continent | DW | 18.11.2020

The Indian government is preparing for its worst phase in the pandemic as a "third wave" hits Delhi. The state has recorded more than 1,000 deaths in the last two weeks. Murali Krishnan reports. 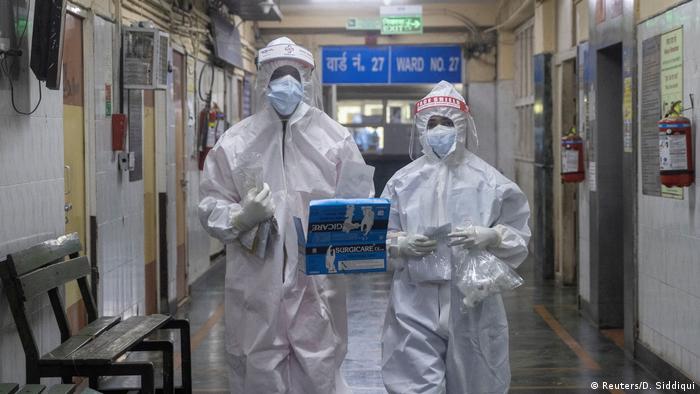 COVID-19 infections and deaths have fallen from a mid-September high nationally, but in Delhi, India's most populous state, the situation looks very different. Last week, it recorded its highest infections and deaths with over 51,000 cases, bringing its total caseload to more than 489,000.

Since the middle of May, Delhi has gradually lifted restrictions and reopened markets and public transport. Just last week, the state of 20 million people celebrated the Hindu festival of Diwali.

During a live broadcast, Delhi Chief Minister Arvind Kejriwl called on people to wear masks and adhere to social distancing as authorities warned Delhi could see as many as 15,000 cases a day.

"If we see that social distancing and mask-wearing is not being followed in any market, and there's a possibility of those areas becoming a hot spot, we should be allowed to close them down for a few days," Kejriwl said, adding that he had written to federal authorities for permission to impose the restrictions.

New Delhi's poor air quality also seems to have compounded the spread of the virus. The city has high levels of tiny pollutants of the size known as PM 2.5, which doctors warn can enter the nose to weaken the inner lining of the lungs and help the virus spread.

Over the last two weeks, Delhi's air quality index was at on some occasions 12 to 14 times greater than the World Health Organization's (WHO) safe levels.

Kejriwl maintains that Delhi's lack of intensive care unit (ICU) beds is the city's biggest challenge in its fight against COVID-19.

The state government's online tracker showed just 116 beds available, from a total of 1,327 in intensive care units equipped with a ventilator.  State hospitals are also overworked with surging patient numbers.

"At present, about 60% of the COVID-19 beds in the city are occupied. If the situation continues, there will be a crisis," Sanjay Rai, a community medicine expert, told DW.

So far around 75 doctors and 250 paramedics from central paramilitary forces have been flown in from other cities to meet Delhi's shortage of health workers amid its rise in infections.

'No chance' of another lockdown

Despite concerns of a looming health "crisis,"  Delhi Health Minister Satyendar Jain said that there would be "no chance of reimposition of lockdown" in Delhi. "The festival is over and the crowds will get thinner in markets from now on," he told DW.

He partly attributed the coronavirus surge to contact tracing and targeted testing of the population. He also said the rise was due to increased RT-PCR testing as opposed to rapid antigen tests, which he said tend to generate more false negatives.

Last month, a government appointed panel of scientists said that the virus had already peaked in India and would run its course by February next year. According to the panel, the number of daily new coronavirus infections will continue to fall. The scientists said that the pandemic could be under control by February 2021, provided all health protocols are followed and if the government does not relax social distancing rules any further.

India, which has recorded a total of 8.87 million coronavirus cases with 130,519 deaths, is the world's second worst hit nation after the US.