Restaurants and cafes across Austria have finally reopened their doors, and the mood among owners, staff and customers is a mixture of relief, pleasure and apprehension. Their main concern is: Will it last? 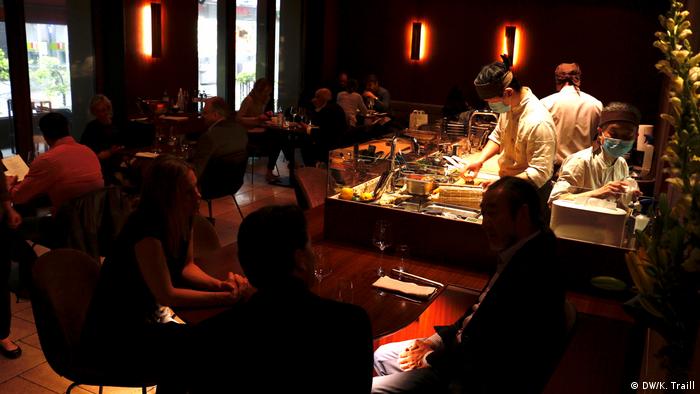 It's been a long nine weeks for Joji Hattori, owner of Shiki, a Japanese restaurant and brasserie with one Michelin star in Vienna's historic center. He's relieved that he managed to keep his business afloat without having to fire any of his 35 staff and encouraged that his brasserie has been booked out since resuming operation on Friday. But as to what the future holds? He has no idea.

"The problems for many Asian restaurants began back in February, as patrons associated COVID-19 with China," says Hattori. His establishment was not significantly affected, but "by the beginning of March people were afraid to go out and business dropped by half."

When Austria's national lockdown began on March 16 — earlier than other European countries with similar case numbers — Hattori initially imagined it would be "for 2-3 weeks." Many restaurants began to offer takeout services, but this "would not work for a Michelin star restaurant," and he had no option other than to close completely. Thanks to the government's Kurzarbeit scheme (reduced working hours), staff continued to receive 85% of their salaries.

His team are now "very motivated" and glad to be back at work, although so far only the brasserie is open. Running his fine-dining enterprise remains financially unviable as it relies on international guests for half its business. "We normally have a lot of guests who come to Vienna for congresses and conferences, as well as tourists," he says. "And we have no idea when these will begin again."

Shiki's wait and bar staff are wearing special-ordered plexiglass mouth covers. Sushi bar chefs have face masks. It's "unrealistic" for the other chefs to cover their mouths, Hattori says, as "they need to taste things every minute."

As per the new regulations, Shiki has replaced its 15-page menus with single-use paper copies and moved tables further apart. But Hattori considers the "maximum four people to a table unless they live in the same household" rule to be "over the top," given that people are now able to meet in larger numbers in their homes. 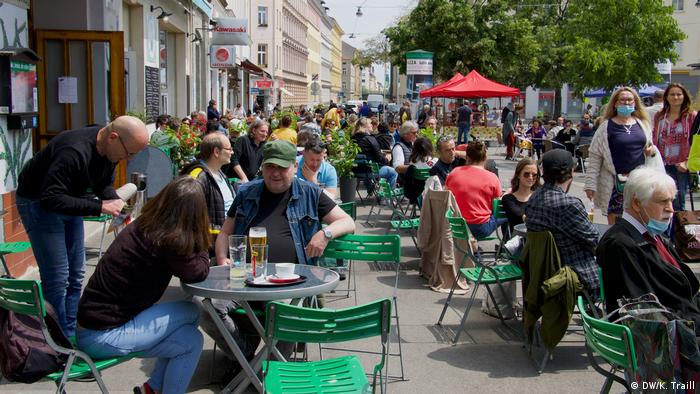 In Vienna's bustling Yppenplatz — a popular hipster meeting point — there was similar enthusiasm for the reopening of the food service industry.  If not for the waitresses wearing full-face plexiglass shields and armed with industrial-sized bottles of alcohol disinfectant spray, it could almost have been a normal weekend in the cosmopolitan square.

Outside tables at a row of cafes were packed, with customers enjoying the sunshine; there was hardly a mask to be seen. The new rules state that patrons need only wear masks while entering and leaving cafes and restaurants. Once seated, face coverings can be removed. Newspapers, often provided by the cafes themselves, are no longer allowed as they cannot be disinfected, nor is standing at the bar.

The waitress at Yppenplatz's Cafe Club International was rushed off her feet, but smiling and happy to be working again. "It's not so bad. You get used to it," she said of her face shield. "We are all in the same situation and have to adapt."

However, not everyone involved in the catering business is certain that the new measures are adequate to prevent a second wave of infections.

Tomas (not his real name) is a kitchen hand at an upscale Italian restaurant in a wealthy Viennese suburb.  He returned to work last Thursday after being fired at the beginning of the lockdown. Fortunately for Tomas, he received a small payment from the AMS (Jobseeker Service), but says many others in the industry work under the table and have no safety net to fall back on.

His major concern now is the lack of safety precautions being taken in the kitchen area, where his duties include preparing salads and cold antipasti.

"Keeping the required one meter (3 feet) distance from other employees is impossible," he says, "And  staff are not required to wear masks unless they are in contact with guests." 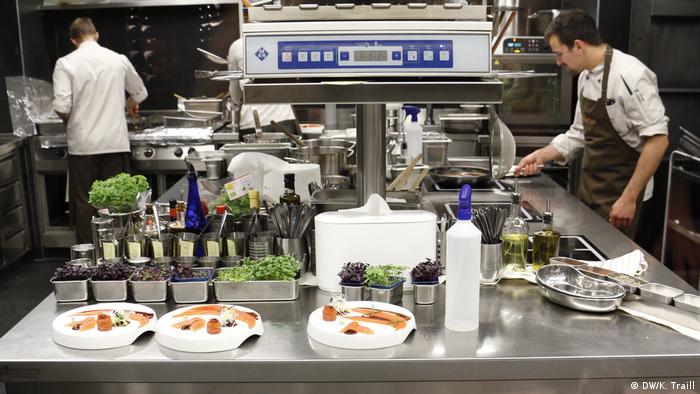 Tomas feels the process of restarting the industry was "rushed, to get the economy going," which he understands. But he strongly believes there should be stricter regulations for those preparing food and complains that his employer does not even provide hand disinfectant for staff.

"People aren't taking the potential threat seriously enough," he says. "I understand the fatigue, but I see many of my coworkers are not getting what the fuss is about. I guess because there were relatively few cases in Austria, they did not have any personal experience of someone they knew getting sick."

Tomas says his first days back on the job were busy. "People are keen to get out again and socialize. This, combined with people consuming alcohol and becoming relaxed is very dangerous."

According to a Federal Economic Chamber study, up to one third of guesthouses and hotels are threatened with bankruptcy. Chamber President Harald Mahrer says he hopes many businesses will pick up now that their clientele are able to return. But it is the hotels and restaurants that cater for the international tourist sector which are most at risk.

"Austria is a much-loved tourist destination and many hotels and cafes rely on foreign tourists for up to 95% of their trade," Mahrer told the Austrian broadcaster, ORF, on Friday. "Until we know when tourists will begin to travel again, it makes no sense for these businesses to open." It's a city renowned for its cafe culture and extravagant cakes, and the traditional coffee houses of Vienna's old center are typically packed with tourists. But this weekend at the historic Cafe Central,  the usual queues were non-existent.

Vienna-born Pia McBean was visiting the cafe for the first time. "It's actually nice to be able to go to places you normally couldn't get into because they always full," she says. "And it's great to catch up with people in person again."

Her friend, Anne Harvey-Nagl, concertmaster of the Vienna Volksoper orchestra, was very happy to be able to visit a cafe again. As a professional musician her normal workdays involve plenty of cafe and restaurant visits between rehearsals and performances, and it's been "strange not to have that routine," although she has "saved a lot of money she hasn't been earning."

No one seems quite sure how long the once taken-for-granted freedoms will last. Will there be a second wave and another lockdown? Will the tourists return? Will people be able to afford to eat out?

For now, Joji Hattori is just grateful to be in Austria. "It's definitely one of the best countries to be living in at the moment."