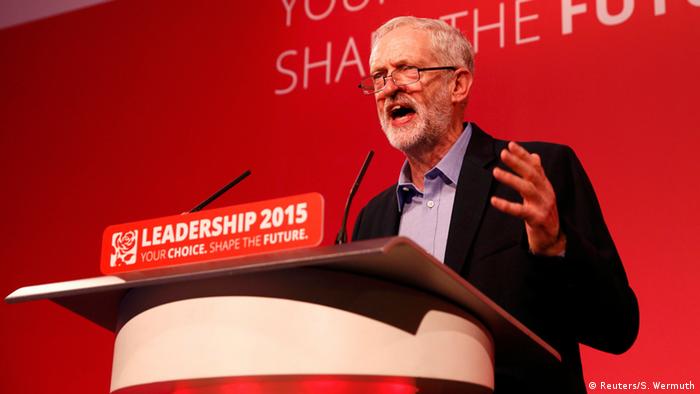 Jeremy Corbyn addressed trade unions in his first public speech since winning control of the Labour Party and announcing his shadow cabinet. The veteran left-wing lawmaker had swept to victory on Saturday, winning his a majority mandate to lead the Labour opposition in the UK.

In a speech at the Trades Union Congress (TUC) in Brighton in southern England, Corbyn called the Conservative government "poverty deniers."

"They call us deficit deniers, but then they spend billions cutting taxes for the richest families and for the most profitable businesses. What they are is poverty deniers," the 66-year-old socialist said.

"Austerity is actually a political choice that this government has taken and they're imposing it on the poorest and most vulnerable in our society," Corbyn said, receiving a standing ovation from his followers.

Labour-leader Corbyn also told assembled union members that the Conservative government was declaring war on organized labor. He promised to fight Conservative legislation currently passing through parliament aimed at limiting the unions' grounds to conduct strikes, and is seen by critics as an attempt to undermine their power.

"We will fight this bill all the way, and if it becomes law we will repeal it in 2020," he said, referring to the date of the next national election.

"They're declaring war on organized labor. The burdens they're placing... was in fact the strategy used by General Franco," he said, referring to the Spanish dictator.

The comparison may in part have been triggered as a reaction to a recent Conservative Party tweet, which had described Corbyn as a "national threat." Referring to Corbyn's opposition to Britain's ailing Trident nuclear program and willingness to negotiate with terrorist organizations, the Tories had shared the following tweet provoking widespread response:

The party also released a promotional video along similar lines, also highlighting Corbyn's past willingness to negotiate with Hamas in the Gaza Strip, and with republicans from Northern Ireland.

Corbyn reiterated his intent to shift the party closer to its socialist roots and strengthen links to the British trade union movement which had led to the creation of Labour in 1900.

But Corbyn's landslide victory has also generated dissent among centrists in his party's ranks while inspiring grassroots support. A string of MPs that have held cabinet or shadow cabinet posts in the past had expressed unwillingness to sit on Corbyn's front bench.

On Wednesday, Corbyn will face-off with Cameron at Prime Minister's Questions (PMQs) - his first live televised test as Labour leader from within the House of Commons.

After being elected as the opposition Labour party leader on Saturday, Jeremy Corbyn has moved quickly to reveal his shadow cabinet. The question is whether this will help heal the rift in the party. (14.09.2015)

Britain's opposition Labour party has elected veteran left winger Jeremy Corbyn as its new leader. The one-time outsider succeeds Ed Miliband, who stepped down after the party's electoral defeat in May. (12.09.2015)

Jeremy Corbyn, a veteran socialist, is the frontrunner as the election for Labour leader gets underway. While some worry Corbyn is too left of center to win, the man himself concentrated on regaining support in Scotland. (14.08.2015)