A road tunnel near the prehistoric monument Stonehenge has been given the go-ahead despite widespread backlash. The $2.2 billion scheme will not get underway until the second half of 2022 at the earliest. 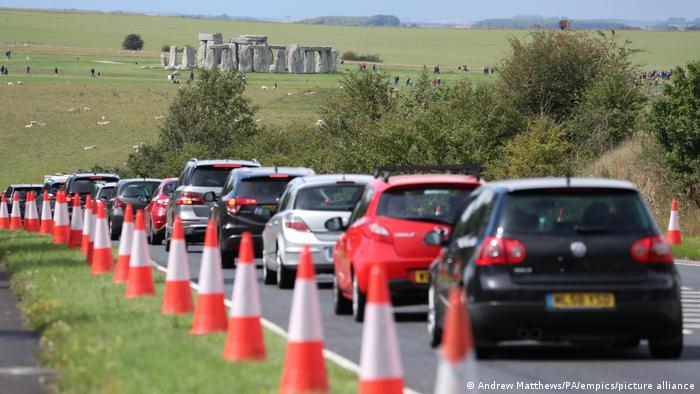 The British government approved a $2.2 billion (€1.86 billion) tunnel under Stonehenge on Thursday, overruling the recommendations of planning officials.

The transport secretary, Grant Shapps, administered a development consent order which will allow the conversion of the part of the nearby segment of the A303 road into a two-lane underground tunnel. Currently, the short stretch around Stonehenge is a rare single-lane segment on the A303, which starts suddenly in a hilly area with poor visibility — it's often the site of tailbacks and accidents.

"The Secretary of State agrees the benefits of the development would include enabling visitors to Stonehenge to see the stone circle without the visual and aural distraction of road traffic," Shapps said in a letter giving the green light for the operation.

As well as easing congestion at a site serving double the traffic it was designed for, Highways England argue that the project will restore tranquility to the mysterious circle of stones in southern England by removing the sights and sounds of traffic nearby.

One of the world's most famous prehistoric monuments, Stonehenge includes a 5,000-year-old ditch and a Neolithic stone circle with early Bronze Age burial mounds nearby. It was inscribed on the World Heritage Site list in 1986.

But the decision by the UK government goes against the recommendation of the Planning Inspectorate, which warned of "permanent" and "irreversible" harm.

The Stonehenge Alliance's Kate Fielden reacts to the decision

Some archaeologists and local residents also oppose the project. They say the tunnel is too short and will damage the archaeological surroundings. They have called for a deep-bored tunnel of at least 4.5 km (3 miles) in length.

Meanwhile, Stonehenge Alliance, a group of non-governmental organizations set up to protect the site, said it deeply regretted the government's decision and would discuss its options.

"This is a World Heritage Site. It is five and half kilometers across. The tunnel is only 3 kilometers long," Kate Fielden from Stonehenge Alliance told DW. "So although the central part of the World Heritage Site will be more attractive to visitors once the scheme is in place, it will absolutely devastate the land to each side. And there will be a huge loss of archaeological remains."

There is now a six-week period in which the proposals may be challenged in the High Court, Highways England said.